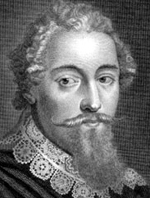 Michael Wood in his book In Search of Shakespeare (which was based on his popular TV series) describes the relationship between Beaumont and Shakespeare in the following passage:-

“By the time The Winters Tale was staged inthe summer season of 1610 at the Globe, Shakespeare was forty-six and had ceased to act. Christmas that year saw the usual exhausting run of fifteen plays at court. Still a shareholder in the company, Shakespeare was now writing very little, except revisions, although perhaps playing a role as executive producer, script supervisor and editor for the young playwrights Francis Beaumont and John Fletcher, who were taking over as principal writers” p321

As a fellow Leicestershire landowner Beaumont shared a natural affinity with Elizabeth Sidney/Manners. On his side at least there seems to have been a romantic attachment directed towards her, and he wrote a furiously angry poem An Elegy on the Death of the Virtuous Lady Elizabeth, Countess of Rutland (see Beaumont 2 on this site) when she died so young. However the extent that she shared and reciprocated his feelings is not known but there is no doubt of the friendship between the poet and the countess.

Madam, so may my verses pleasing be,

So may you laugh at them and not at me,

‘Tis something to you gladly I would say;

But how to do’t I cannot find the way.

I would avoid the common beaten ways

To women used, which are love or praise:

As for the first, the little wit I have

Is not yet grown so near unto the grave,

But that I can, by that dim fading light,

Perceive of what, or unto whom I write.

Let such as in a hopeless, witless rage,

Can sigh a quire, and read it to a page;

Such is do backs of books and windows fill,

With their too furious diamond or quill;

Such as were well resolved to end their days

With a loud laughter blown beyond the seas;

Who are so mortified that they can live

Contemned of all the world, and yet forgive,

Write love to you: I would not willingly

Be pointed at in every company;

As was that little tailor, who till death

Was hot in love with Queen Elizabeth:

And, for the last, in all my idle days

I never yet did living woman praise

In prose or verse: and when I do begin

I’ll pick some woman out as full of sin

As you are full of virtue; with a soul

As black as you are white; a face as foul

As you are beautiful: for it shall be

Out of the rules of physiognomy

So far, that I do fear I must displace

The art a little, to let in her face.

It shall att least four faces be below

The devil’s; and her parched corpse shall show

In her loose skill as if some sprite she were

Kept in a bag by some great conjurer.

Her breath shall be as horrible and wild

As every word you speak is sweet and mild;

It shall be such a one as will not be

But let her take all powders, fumes, and drink,

She shall make nothing but a dearer stink;

She shall have such a foot and such a nose,

She shall not stand in anything but prose;

If I bestow my praises upon such,

‘Tis charity, and I shall merit much.

My praise will come to her like a full bowl,

Bestowed at most need on a thirsty soul;

Where, if I sing your praises in my rhyme,

I lose my ink, my paper, and my time;

And nothing add to your o’erflowing store,

And tell you nought, but what you knew before.

Nor do the virtuous-minded (which I swear,

Madam, I think you are) endure to hear

Their own perfections into questions brought,

But stop their ears at them; for if I thought

You took a pride to have your virtues known,

Pardon me, madam, I should think them none.

To what a length is this strange letter grown,

In seeking of a subject, yet finds none!

But your brave thoughts, which I so much respect

Above your glorious titles, shall accept

These harsh disordered lines. I shall ere long

Dress up your virtues new, in a new song;

Yet far from all base praise and flattery,

Although I know whate’er my verses be,

If I write truth, and make the subject you.