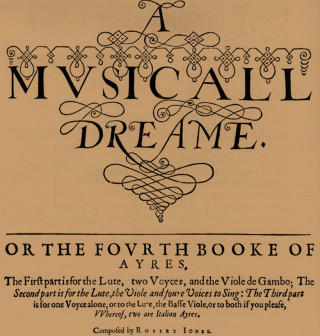 Robert Jones A Musicall Dreame or the Fourth Book of Ayres 1609. Detail of the Title Page 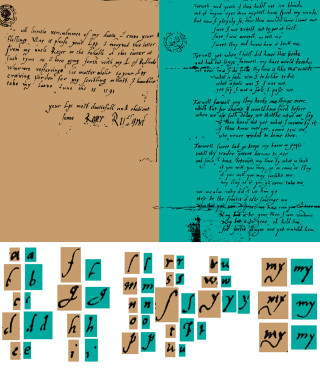 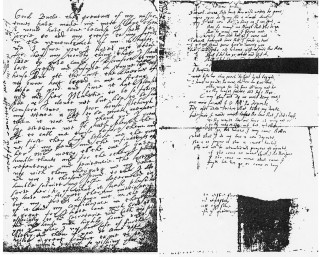 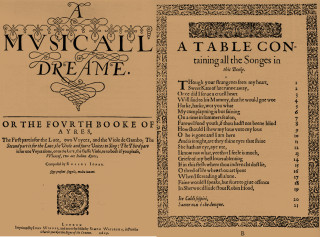 Robert Jones A Musicall Dreame or the Fourth Book of Ayres 1609. Title Page and Table of Contents

With regard to the second problem with Porohovshikov’s hypothesis, if the Man’s Part of The Two Lovers is something of a disappointment being just a written copy of a previously printed song, the Woman’s Part is something of a discovery, although not perhaps quite on the grandiose scale that Porohovshikov imagined. Like Farewell Dear Love, Farewell Fond Youth was published as a song by Robert Jones. However the date of this publication is significant it was included, in a shortened form, in his book A Musicall Dreame or the Fourth Book of Ayres which was published in 1609. There therefore is every likelihood that the song in the Belvoir Castle archives is a draft which was later given to Jones to be amended and published. As we have seen Porohovshikov’s hypothesis was based on the idea that the text was written by Roger Manners and I am grateful to the Belvoir Castle archivist Mr Webster for the information that written on the outside of the document is a phrase which reads “this is undoubtedly in the hand of Roger 5th Earl of Rutland probably about 1595. Granby 1919.” (the eldest son of the Duke of Rutland has the title of the Marquis of Granby). With regard to this dating as we have seen the Man’s Part was published in 1600 whilst the Woman’s Part was published in 1609, this suggests that they were not written contemporaneously as it would have made more sense to have published both sections in 1600 had they been extant.   Porohovshikov was therefore following the Marquis of Granby’s model when he made his assertion of the handwriting of the document in Shakespeare Unmasked.

However it is directly contradicted by a comparison of the handwriting with Roger Manners signed letters. In the 17th century it was common for the highly educated to have two styles of handwriting an everyday style for notes and casual letters and a polished script for more formal communications. In the case of the songs, The Man’s Part, Farewell Dear Love is written in the everyday style and The Woman’s Part, Farewell Fond Youth in the formal.  Porohovshikov helpfully included copies of both of Roger’s styles in his book.

Above on the left is a copy of Roger Manners informal handwriting style taken from a 1601 letter that he wrote to his Uncle Roger whilst imprisoned in the Tower for his part in the Essex Rebellion on the left is the manuscript copy of The Man’s Part, Farewell Dear Love in the writers informal style. The reader can see the clear distinctions between the two hands

The manuscript above shows on the left a copy of a 1591 letter from Roger Manners to his mother, which I have placed on brown background on the right is the manuscript copy of The Woman’s Part, Farewell Fond Youth which I have placed on a green background.Below them is a comparison between the formal handwritten characters of Roger Manners on the brown background and the formal style of the manuscript copy of The Woman’s Part, Farewell Fond Youth on the green background.  I have copied these letterforms using the Adobe Photoshop programme. Letters such as j k x and z which were not present in Roger’s letter have been omitted. As the reader can see there are important differences between the brown and green scripts which are particularly marked in letters with ascenders and decenders such as b d f g h l p, (especially the 17th century long S), t  and y . There are also variations in the green script which uses different forms of letters such as d t and y in a way that the brown script does not. On the right are three different examples, from Roger’s script of the word my, together with three from the song. Although I do not claim to be a handwriting expert, I believe that the distinctions between the two scripts are so fundamental that they demonstrate that manuscript copy of The Woman’s Part, Farewell Fond Youth could not in fact have been written in the hand of Roger 5th Earl of Rutland.

The text of the song reads as follows:-

Farewell and youth if thou hadst not been blind

Out of mine eyes thou mightst have spied my mind

But now I plainly see how thou wouldst first seen me

Sure I was accurst not to go at first

Sure I was accurst, no tell me

Sweet stay and hear how it befell me

Farewell yet when I first did here thee speak

and had but sung farewell my heart would break

but since I do find thy love is like the wind

what a fool was I to belike to die

what a fool was I, I was not

yet say I was a fool I pause not

which but for shame I would have said before

when we use such delay, we think not as we say

if thou know not yet, what I meant by it,

if thou know not yet, come to me,

who never minded to deny thee

until thy tender years become to age

and since I have betrayed my love by what is said

if you will you may, go or come or stay

if you will you may forsake me

nay stay, or if you go come take me

woe me alas why did I let him go

these by the fruits of idle saying no

Nay but is he gone then I am undone

Nay but is he gone, oh hold him

Fie forty things are yet untold him

Farewell Dear Love is a song whose key line is:-   Shee is as faire as shee is cruell harted   the young male protagonist disappointed with his lack of progress in courting his lady, is vacillating  between giving up his suit and his anxiety that he may see someone else wooing her more successfully, so  in the end he despairs and wants to die for love. :-

If shee come no more,

Shall I die therefore

If shee come no more, what care I ?

Faith, let her go, or come, or tarry.

In Farewell Fond Youth the key lines are:- Farewell and youth if thou hadst not been blind Out of mine eyes thou mightst have spied my mind, the woman answers the accusation of heartlessness by saying that as, a typical man, he has failed to understand the subtle signals of encouragement that she has been giving him, She then blames herself for not giving clearer signs and regrets the fruits of idle saying no. The song therefore is written with a woman’s sensibility, from a woman’s perspective, as a defence against accusations of female cruelty to male suitors and as such, even without the handwriting difficulties, it was I believe, an unlikely project to have been undertaken by Roger Manners 5th Earl of Rutland. However as we have seen Ben Jonson said ‘The Countess of Rutland was nothing inferior to her father Sir P Sidney in Poesie’ so it is I feel far more likely that she wrote Farewell Fond Youth as a rebuttal to Farewell Dear Love which she had heard and noted down at some social occasion. The song was probably performed at one of her literary gatherings before being given to Robert Jones for publication and amendment as the eighth song in A Musicall Dreame

Jones’s version of the song reads:-

Farewell fond youth, if thou hadst not beene blinde,

Out of mine eyes thou mightst haue read my mind,

But now I plainely see how thou wouldst faine leaue me

Not to goe at first,

Sure I was accurst, O fie no,

Sweet stay and I will tell thee why no.

Once more farewell, since first I heard thee speake

And had but sung farewell, my heart would breake,

But now since I doe find thy loue is like the wind,

What a foole was I,

What a foole was I, I was not,

Yet say I was a foole I passe not.

Woes me alasse, why did I let him goe,

These be the fruites of idle saying no

Now that he can disproue me, how shall he euer loue me,

Nay but is he gone,

Nay but is he gone, O hold him,

Fie, forty things are yet vntold him .

Unfortunately it has not yet been possible to gain access to the achieves of Belvoir Castle in order to find signed copies of Elizabeth Countess of Rutland’s writing to compare with the text of Farewell Fond Youth but I hope that, particularly as a result of this article, that this may be possible in the future.

I am grateful to my friends from the Mermaid Group, Jules Tobin, Neil Fortey, Kate Pugh and Elaine Marlow for their help in researching this article, although the views expressed are my own and I am of course entirely responsible for any mistakes.