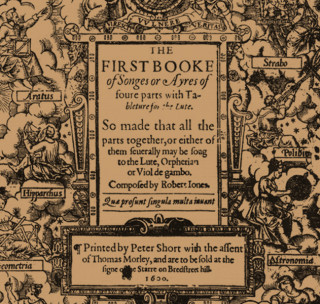 Robert Jones The First Book of Songs or Ayres with tablature for the Lute in 1600. Detail of Title Page 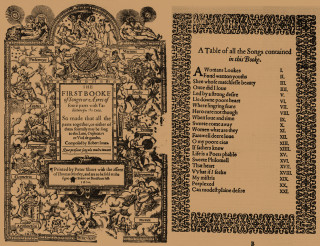 Robert Jones The First Book of Songs or Ayres with tablature for the Lute in 1600. Title Page and Table of Contents

Pierre Porohovshikov, Master of Arts of  Moscow University, Laureate of the Pushkin Award of the Russian Imperial Academy of Science, and Professor of History at Oglethorpe University, did not entertain any doubts about the falsity of Shakespeare’s claim to have written the plays. During the late 1930’s he visited the achieves of Belvoir Castle to research the theory that Roger Manners 5th Earl of Rutland was the real author, fortunately he took his camera with him. With what seems to have been mounting excitement he came upon the manuscript sheets of what was catalogued as a poem but is actually a song in two parts of five stanzas each entitled Two Lovers. The cause of his excitement was that verses from the catalogued second part of the song, entitled The Man’s Part, which start with the line Farewell Dear Love appear in the play Twelfth Night. Here at last Porohovshikov thought, was part of the manuscript of a Shakespearian drama which had been published and performed, moreover this manuscript was in the hand not of William Shakespeare but of Roger Manners. This was the proof that Roger was the real author! In his book Shakespeare Unmasked Porohovshikov proclaimed that the manuscripts of the two songs would one day be recognized as the most important documents in the whole history of English Literature and he supported his contention by publishing not only photographic copies of them but also of other documents written and signed by Roger Manners.

However there are two major difficulties with Porohovshikov’s position as a historical hypothesis. Firstly there is no evidence that the song verses were actually written by Shakespeare and secondly there is evidence that the Two Lovers manuscripts were not in fact in Roger Manners’ handwriting.

With regard to the first point the Farewell Dear Love verses in the manuscript read :-

Farewell dear loue since thou wilt needs be gone

Mine eies do shew my life is almost gone

Nay I will neuer die

So long as I can spie

There be many mo

Though that she doe go

There be many mo I feare not

Why then let her goe I care not

Farewell, farewell, since this I finde is true

I will not spend more time in wooing you

But I will seeke elsewhere

If I may find her there

Shall I bid her goe

Shall I bid her goe and spare not

Ten thousand times farewell, yet stay a while

I haue no power to moue

Wilt thou needs be gone ?

Go then, all is one

Once more farewell, I see loth to depart

Bids oft adew to her that holdes my hart:

But seeing I must loose

Thy loue which I did chuse:

Go thy waies for me

Since it may not be

Go thy waies for me, but whither ?

Go, oh but where I may come thither

What shall I doe ? my loue is now departed

Shee is as faire as shee is cruell harted

Shee would not be intreated

If shee come no more

Shall I die therefore

If shee come no more, what care I ?

Faith, let her go, or come, or tarry

However the verses in Twelfth Night ACT II, SCENE III  are not exact copies of the lines of this song  they are in fact, variations, performed by different characters thus:-

‘Farewell, dear heart, since I must needs be gone.’

‘His eyes do show his days are almost done.’

Sir Toby, there you lie.

This is much credit to you.

steward? Dost thou think, because thou art

virtuous, there shall be no more cakes and ale ?

These variations can I feel be explained by the dating of versions, the Belvoir Castle manuscript was catalogued as being c1607 and academic opinion has Twelfth Night as being written and performed in 1602. However Farewell Dear Love was previously published as a song by the musician Robert Jones in his The First Book of Songs or Ayres with tablature for the Lute in 1600.Farewell Dear Love was song number XII.  So far from proving that Roger Manners and William Shakespeare were the same person, what Porohovshikov has actually demonstrated was that may have had the same taste in music.

It was common practice for musicians such as Jones to set other peoples poems to a lute accompaniment so it could be that Shakespeare wrote the original verses but there is no evidence for this, so it is equally or more likely that they had another author. What the comedy of ACT II, SCENE III was about is a seemingly Cervantes inspired, contrast between the courtly Romantic text of an idealized young man sighing and dying for love and the realism of characters like Malvolio and Sir Toby Belch who had more, Sancho Panza like, earthly preoccupations. Indeed Elizabeth Sidney’s friend Francis Beaumont also used Farewell Dear Love (amongst lots of other songs) for the same theatrical devise in his The Knight of the Burning Pestle 1607, a play which was strongly influenced by Don Quixote.