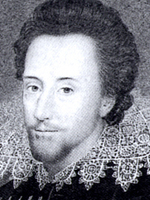 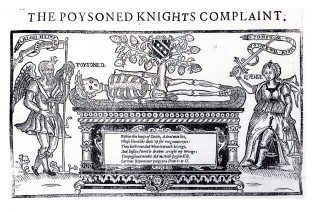 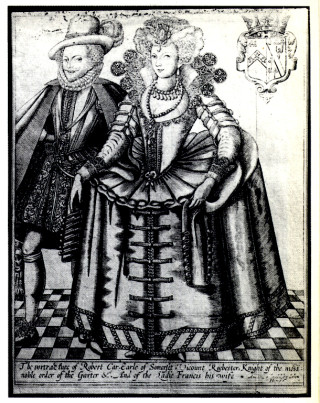 Double portrait engraving of the Earl and Countess of Somerset, probably produced around the time of their trails in 1616

The first dated mention of Sir Thomas Overbury’s poem ‘A Wife’ (also referred to as ‘The Wife’) is in December 1613, when it was entered at the Stationers’ Registers; the poem was first published, with no additional material, in 1614. However Ben Jonson told a story about how Overbury tried to use Jonson’s recital of this poem as a means of attempting the seduction of Elizabeth Sidney/Manners, around about 1605, a strategy which resulted in a rift between the two poets. Nonetheless the poem seems to me to be unlikely seduction material stressing as it does marital virtues. By 1664, it had gone through eighteen editions – ten in the years before 1618 alone. With each new printing, more material was added, including the Characters, various elegies for the deceased knight, as well as other bits and bobs of prose and poetry. Most of this material has little relation to the other items with which it was published, and rather less redeeming literary value; even at its best it should perhaps be considered an example of the organic nature of publishing at the period. (I have included the first ten stanzas to give the reader a flavor of the poem)

Overbury was murdered by being poisoned when he was imprisoned in the Tower of London in 1613 . His murderers were none other than Frances Devereux nee Howard, the bride for whom Elizabeth Manners had danced in Ben Jonson’s Masque of Hymenaei and her lover (and the King’s lover) Robert Carr, Earl of Somerset. Overbury’s death was to cause one of the great scandals of the Jacobean period, which led to the ruin of Frances and Robert, Earl and Countess of Somerset, and the execution of Mrs Anne Turner and Sir Gervase Elwes more minor figures in the conspiracy

I. Each woman is a briefe of womankind,

And doth in little even as much containe,

As, in one day and night, all life we finde,

Of either, more is but the same againe:

God fram’d her so, that to her husband she,

As Eve, should all the world of woman be.

II. So fram’d he both, that neither power he gave

Use of themselves, but by exchange to make:

Whence in their face, the faire no pleasure have,

But by reflex of what thence other take.

Our lips in their own kisse no pleasure find:

Toward their proper face, our eies are blinde.

III. So God in Eve did perfect man, begun;

Till then, in vaine much of himselfe he had:

In Adam, God created only one,

Eve, and the world to come, in Eve he made.

Both barren are; joind, both their like can raise

IV. At first, both sexes were in man combinde,

Man a she-man did in his body breed;

Eve from live-flesh, man did from dust proceed.

And makes them both but one hermaphrodite.

V. Man did but the well-being of this life

From woman take; her being she from man;

And therefore Eve created was a wife,

And at the end of all her sex, began:

Mariage their object is; their being then,

And now perfection, they receive from men.

VI. Mariage; to all those joyes two parties be,

And doubled are by being parted so,

Wherein the very act of chastity,

Which makes two, one; while here they living be,

And after death in their posterity.

VII. God to each man a private woman gave,

Double is womans use, part of their end

Doth in this age, part on the next depend.

VIII. We fill but part of time, and cannot dye,

Till we the world a fresh supply have lent.

Now all mans art but only dead things makes,

But herein man in things of life partakes.

It still begins, and addes not more to more:

The guilt is everlasting, the delight,

This instant doth not feele, of that before.

The taste of it is only in the sense,

The operation in the conscience.

X. Woman is not lusts bounds, but woman-kinde;

One is loves number: who from that doth fall,

Hath lost his hold, and no new rest shall find;

Vice hath no meane, but not to be at all.

A wife is that enough; lust cannot find:

For lust is till with want, or too much, pin’d.