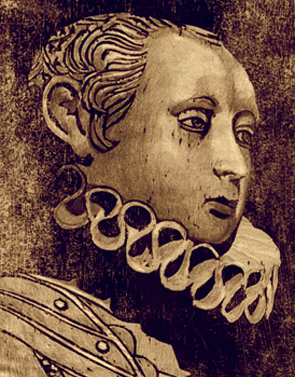 Roger Manners 5th Earl of Rutland as a young man. Drawing based on a tomb effigy in St Mary's Church Bottesford

As I mentioned in the Life section of the Elizabeth Sidney, pages of this website. Ben Jonson, Shakespeare’s friend and rival playwright knew the Countess of Rutland well as she was a patron and the inspiration for three of his poems, EPISTLE TO ELIZABETH COUNTESS OF RUTLAND, AN EPIGRAM TO THE HONOURED [ELIZABETH,] COUNTESS OF [RUTLAND] and TO ELIZABETH, COUNTESS OF RUTLAND. (These poems can be read in the Poetry sections). In his discussions with William Drummond of Hawthornden, who recorded their conversations during Jonson’s visit to Scotland 1618-1619, Ben Jonson stated that she was as talented a poet as her father had been, as he said :- “The Countess of Rutland was nothing inferior to her father Sir P Sidney in Poesie” (line 172) but unfortunately none of her poems are now known.

However I believe that I may have discovered some of her writing, a song called Farewell Fond Youth which is in the archives of Belvoir Castle. My hypothesis was made during a visit to the British Library in 2006 when looking at one of the books which argue that Roger Manners, 5th Earl of Rutland was the real author of Shakespeare’s plays. This book was by P. S Porohovshikov entitled Shakespeare Unmasked, and it was published in New York in 1940.

Porohovshikov was a Russian lawyer in exile from Stalin’s Soviet Union and I should perhaps explain why he and other scholars who are known as the Antistratfordians wanted to Unmask William Shakespeare and to prove that he was not in fact the greatest author in the English language but in fact some kind of sham. This school of thought arose from the frustrations of would be 19th and 20th century biographers of the Bard with the dearth of factual and documentary evidence about his life. In fact beyond his birth, marriage, death records,and those of his children, his will, a few legal documents and some anecdotes, very little is known. There are no letters and only some fragmentary and disputed manuscript pages of an unstaged play Sir Thomas More in his hand. (Ironically one of the best records of Shakespeare’s life is that he was employed by Roger Manners’ brother Francis 6th Earl of Rutland to write a motto for a ceremonial shield in one of James I court masques.)

Faced with this lack of information the Antistratfordians began to ask questions the most important of which was, how could it have been that the greatest ever English writer never wrote anything down? Which was followed up by supplementaries such as:-How could someone without a university education have had such profound classical and historical knowledge and indeed access to untranslated French and Italian sources?  Why was his handwriting and spelling as evidenced by his signatures so poor? How could the son of a Stratford glover have understood Courtly etiquette and behaviour so well? Why did he not mention the library of books the playwright must have had in his will? The Antistratfordians, (their prominent supporters being the authors Mark Twain and Henry James) began to answer these questions with the model that William Shakespeare was a stooge or front man for the real author who had of course had a written archive, neat handwriting, a comprehensive library, university education and access to the Court. The major candidates for this position have included, Edward De Vere, 17th Earl of Oxford, William Stanley, 6th Earl of Derby, Sir Francis Bacon, Christopher Marlowe and Roger Manners 5th Earl of  Rutland.

The argument against the Antistratfordian claims for alternative authorship of the Shakespearian canon, accuses them of bad historiography, of establishing the contemporary  paradigm of the Great Writer as somehow universal, ‘for all times and all places’ to misunderstand Ben Jonson  and therefore blaming a 17th century author for not behaving like a 19th or 20th century one. The stereotype of the history Shakespeare’s period particularly the Elizabethan era was that this was a Golden age, ‘The Merrie England of Good Queen Bess’, an arcadia of Great art and Great men and women who laid the foundations of Great Britain’s future Great Empire.

However the reality is that this was an age of intense religious conflict in which Protestants and Catholics fought out a civil war for control of the National Church, it is for example, estimated that around 28,000 people were executed for religious reasons during Queen Elizabeth’s reign. Her father Henry VIII had with his Reformation began a struggle which was to become a major factor in every English man and woman’s life between the years 1530-1690 rather as the Second World War was for people alive between 1939-45.

If we look again the Antistratfordian questions and try to put the answers into their historical context we can I believe see that their doubts were mostly misunderstandings of the period. Shakespeare himself explained the lack of written material in his hand when he wrote in a sonnet:-

How careful was I, when I took my way,
Each trifle under truest bars to thrust,
That to my use it might unused stay
From hands of falsehood, in sure wards of trust

The conflict described above was essentially an espionage war between on the Catholic side Jesuit missionaries based in Rome and Rheims who were infiltrating the country in order to practise and spread their faith, and who were frequently sheltered by English Catholics at great personal risk, and on the Protestant side the Government intelligence service organised by Sir Francis Walsingham, Elizabeth Sidney’s Grandfather and Queen Elizabeth’s master spy. Their agents were augmented by a network of spies, double agents, informants, crooks and bounty-hunters called Pursivants who were paid to track down Catholic priests and sympathizers. As the war was essentially a battle of ideas it was closely linked to the Elizabethan theatre because the major themes were often dramatized as a way a gaining popular support. Indeed it was involvement in this conflict which killed Christopher Marlowe. There were two good reasons for Shakespeare to fear the ‘hands of falsehood’ the murky world of secret agents and informers. Firstly Shakespeare was from a politically suspect background, there is strong evidence that his father John was a practicing Catholic involved with the missionary Edmund Campion, who had come to England in 1580 (1) and secondly as writing for the Elizabethan theatre was an intensely competitive activity there was a real risk that other writers, full of professional rivalries and jealousies might denounce him to the authorities. Thus by keeping ‘ Each trifle under truest bars to thrust’ Shakespeare was ensuring that potential enemies were not able to compile a dossier of information to use against him.