You are here: Home>Topics>Architecture>Bottesford Blue Pantile 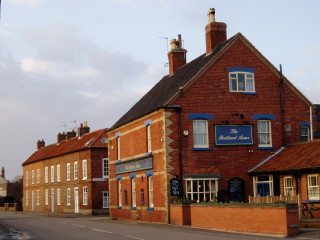 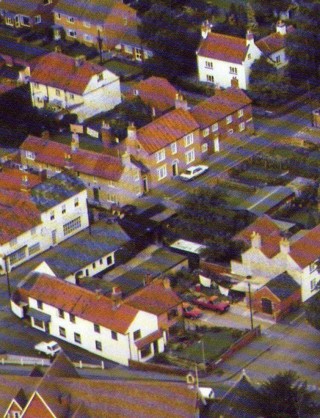 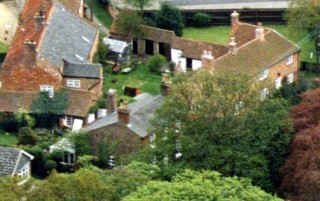 Many older buildings in Bottesford have distinctive blue-black pantile roofs.

The Rutland Arms roof is a fine example.

The aerial photographs also show other examples of houses with Bottesford Blue tiles in the area of Market Street and Rectory Lane.

The local historian, Michael Honeybone notes in his “Book of Bottesford” that “a story survives in the village that only one of Challands’ tilemakers (a 19th Century brick and tile producer) knew the secret of the glaze necessary to achieve the deep navy blue – and it died with him.”

Heritage experts Brooke, Edwards and Tait (1999) also note that such tiles are “unique to this area and was locally produced under the name ‘Bottesford Blue’ in 1830, the brick and tile yard at nearby Beckinthorpe was producing these glazed tiles with a Joseph Walker named as tilemaker. The formula for this locally produced glaze has now been lost, and was last believed to have been used at the end of the nineteenth century when the tradition, which was probably handed down by word of mouth, died out. Its origins are obscure but it appears to have been in use during the eighteenth century and was certainly being produced in 1798-this is unusual, as the pantile, first produced in Britain in the early eighteenth century, is normally not found glazed until the following century.”

Forensic analysis has only recently started to reveal the chemical makeup of the tile glaze and the way it might have been fired when producing these distinctive roof tiles.
There may well have been more than one site of production in Bottesford.

Honeybone (1989) identifies two brickyards in Beckinthorpe in the mid to late 19th Century. One operated by Thomas Hoe who lived in Bridge House, Rutland Lane  and the other run by Joseph Challands.

Local knowledge also locates Challands having a yard at the site of William Roberts’ undertakers premises by the ford.

In addition, the area of the current amenity site adjacent to the Normanton Lane level crossing was formerly claypits where raw material for both the production of tiles and the distinctive diamond patterned paving stones may well have been extracted. These claypits were used as the rubbish dump for a number of years up to the 1980’s.

Mrs. Jean Round of Allington has provided an excellent collection of photographs showing traditional brickmaking in Bottesford. (Click here to look at these). Mrs. Round’s grandfather or great grandfather worked in the brick yard and she believes he was one of the last people to know the secret of the ‘Bottesford Blue’ tiles.