A House History of 7, Albert Street 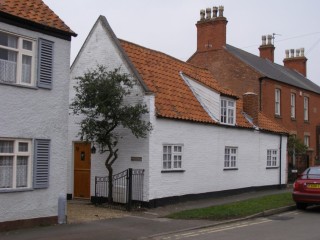 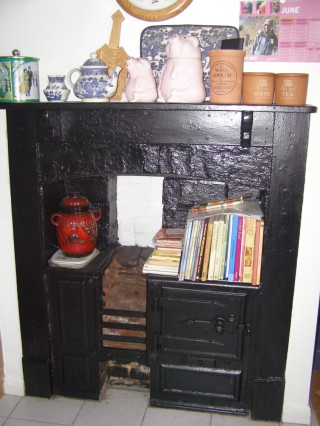 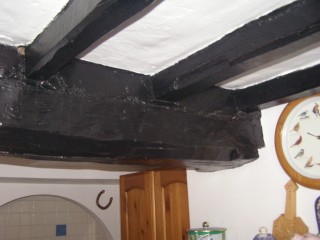 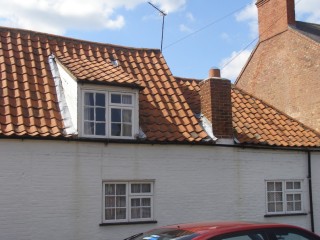 Detail of the roof-line indicating at least two original cottages

We are indebted to Mr Stuart Colledge for allowing us to visit his house, No.7 Albert St, known as Forge Cottage.

Forge Cottage, 7 Albert Street, is one of the older buildings in Bottesford. It is a single story brick cottage with a steep gabled dormer roof. The high gable wall seen at one end indicates that it was once thatched, the wall being designed to prevent the spread of fire. The roof is now covered in pantiles, but its steep rake indicates that it was once thatched. The walls are of bricks about 2¼ inches thick that are typical of the older houses in the village. Seams in the masonry indicate that it was once two or more dwellings, as confirmed by deeds. Each was probably a one-room cottage, whose bedroom was in the loft lit by a dormer window and reached via a ladder or steep staircase.

Despite its modest size, Forge Cottage is a survivor from the times when there was many clusters of tiny labourer’s cottages in Bottesford, rented to agricultural labourers. In some cases, they were enlarged by building up the walls to create more comfortable, better lit upstairs rooms beneath tiled roofs of shallower pitch. This didn’t happen at Forge Cottage, perhaps because it was used as a workshop when such changes were taking place around it. Old photos show that  a similar building formerly stood in front of Queen Street Mill, in what is still open space where it stood next to No.27, and that another stood on High Street.

Tucked away behind Forge Cottage is a two story house that was formerly a stable or barn th atin the 19th Century housed the Independent (Salem) Chapel. Local historian Bob Sparham reports that the baptismal immersion bath was still in existence, under the bathroom floor, when he visited the old chapel in around 2000, and it is probably still there.

We were allowed to examine a set of deeds for Forge Cottage. These take us back to 1872, when Joseph Pickering, an ironmonger, formerly of Bottesford but who had moved to Leicester, owned property in Bottesford which comprised:

” … five messuages or tenements, one of which was used as a shop, with the building used as a chapel, ware room, outbuildings, yards, gardens and appurtenances in the respective occupation of WH Hart, Miss Nixon, JHG Skinner, Thomas Guy and Emily Vials, and also two closes or grounds enclosed containing by estimation 8 acres 3 roods 33 perches in the occupation of W Parnham …” .

Joseph Pickering made a will leaving the property to his wife Hephzibah until her death, after which it was to pass to his only son Thomas Rowland Pickering. However, this son died in 1886, intestate. The result was that his sole surviving sister, Emily Pickering, inherited the property in 1886. A Declaration made by Emily Spencer (née Pickering) in 1918 states that she was 58 in that year, which indicates that she was born in 1860 and hence was 26 years old when she came into her inheritance.

In 1889, Emily married Charles Alfred Spencer and thus became Emily Spencer, but remained the owner of the property in Bottesford. The couple had a son, Rowland Pickering Spencer, who was at Brasenose College, Oxford University, in 1914. On the 1st July 1914 an indenture was drawn up which made the property over to Rowland. Then on 30th October 1917, Rowland, now a Lieutenant in the army, drew up a Deed Poll which gave his mother power of attorney with regard to his estate. On the 6th April, 1918, an indenture was drawn up for the sale of the property to George Norris, a joiner of Bottesford, for £250. In this the property is described as two dwellings (messuages) together with the “stable open cow hovel and trap house and a building built over the same formerly used as a Chapel” and the gardens. This indenture was drawn up by Emily Spencer acting as attorney for her son, Rowland Spencer Pickering. There is no mention of the two closes of land, nor does it explain why the original five dwellings have become two. The original five had probably been converted into two of more comfortable size by this time, or (less probably) three of the original five were in fact on another location (and had either been sold earlier or remained part of Rowland’s estate).

It therefore appears that Rowland Spencer Pickering had enlisted and fought in the 1st World War, and that in 1917 he took the precaution of giving his mother power of attorney in case he was killed in action, which is what unfortunately seems to have taken place.

In 1924, George Norris sold the barn-cum-chapel at the rear of the cottages to James Tuxford, a retired coal merchant of Bottesford. James was granted right of way to reach his property which would otherwise have had no means of access, and also the right to draw water from a pump and well at the rear of Forge Cottage. The right of access is still in force, but the right to the well was surrendered in 1980. Then in 1927, George Norris sold the remaining two cottages (i.e. Forge Cottage) to Mrs Agnes Mary Parr of Nottingham for £200. James Tuxford’s wife, Emily Tuxford, was a well known cookery writer who published a number of books.

In 1955, Agnes Krause (formerly Agnes Parr) sold the two cottages to Henry Eric Jones (a retired engineer) and Helena Grace, his wife, of Wansford, Peterborough, for £280. In 1977, the Jones sold what was now one cottage to W.J. Roberts, the Bottesford house builder. W.J. Roberts sold it in 1980 to Nigel and Susan Smith, who in 1985 sold it to Alexander and June Gibb, who in turn sold it to Stuart Colledge in 1989.

The name “Forge Cottage” for 7, Albert St, appears in the deed in 1985, but was not used in the 1980 conveyance. The papers do not specifically state that the house actually was a forge, though the fact that it was owned by an ironmonger in 1872 suggests that it might well have been a forge earlier in the 19th century, and the “shop” that is referred to may have been his workshop. Presumably the five cottages were created by conversion of the earlier forge buildings before 1872.

The house created from the former barn-cum-chapel at the rear had been given the name “Southbourne House” and the postal address 5, Albert St by 1980. It appears to have fallen out of use as a chapel in the 19th Century, though trade directories of the later 19th century continue to list an Independent Salem Minister, Josh. Lamb (for instance, Wright’s Directory of 1888).

Forge Cottage was let to tenants until it was converted to a single house and sold to W.J. Roberts in 1977. The tenants of the five dwellings in 1872 have already been mentioned. The two cottages sold in 1918 were occupied by Mrs Stevens and Emily Vials. In 1927, the tenants were Emily Vials and William Miller. Emily Vials had lived there as a tenant for at least 55 years! In 1955, the tenants were named Marsh and Norris. The 1977 conveyance makes no specific reference to tenants, but it does indicate that the vendor Agnes Krause was still living at the same address in Nottingham that she had when she first bought the cottage in 1927 as Agnes Parr, so it seems likely she did not actually live in Forge Cottage but rented it as two separate cottages until they were converted and sold on.