You are here: Home>Topics>Architecture>From Pugmill to Clamp - Brickmaking in Bottesford

From Pugmill to Clamp - Brickmaking in Bottesford

How the bricks were made in Bottesford's brickyard. 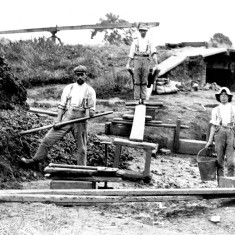 Picture 1 shows the shaft of the pugmill behind the three brickyard workers pausing in their work to pose for the camera. 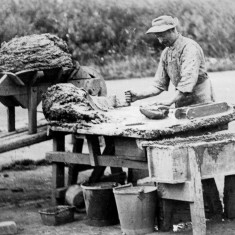 Picture 2.On the moulding bench the brickmaker is taking clay from the heap on the bench 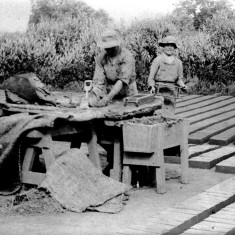 Picture 3. A rectangular 'clot' is formed, smaller and deeper than the mold. 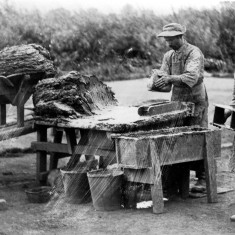 . Picture 4. The clot is thrown hard into the mould so as to fill every corner 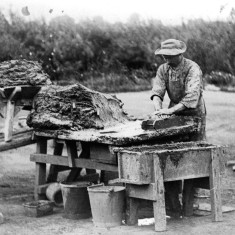 Picture 5. The clay is smoothed down with wet hands. 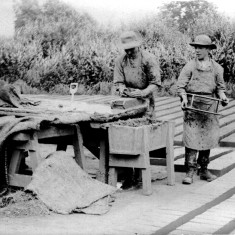 Picture 6. Surplus clay is sliced off the top of the mould. 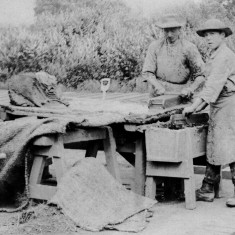 Picture 7. The surface is further smoothed with a 'strike', a moistened stick.. The boy dips another mould in the water trough to prepare it for the next brick. 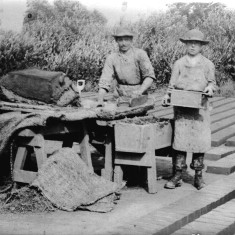 Picture 8. As the brickmaker gathers clay for the next brick, the boy takes the filled mould away. 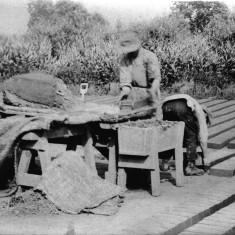 Picture 9. The wet, moulded brick is tipped from the mould and laid on the 'flat' to dry for a day. Later it will be set on the 'hack', a slightly raised wooden platform until it is dry enough for firing. 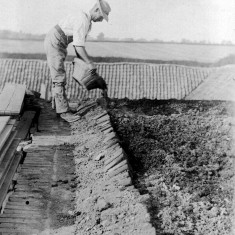 Picture 10. The top of the 'clamp' was covered with old, burnt brick, turf, or 'pug' to conserve heat 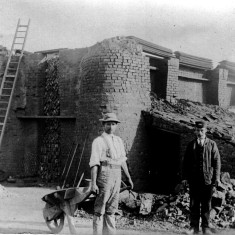 Picture 11. The bricks would be placed in the 'clamp', or kiln, for firing. 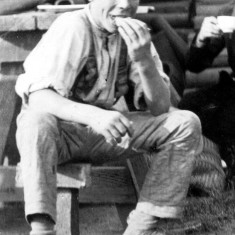 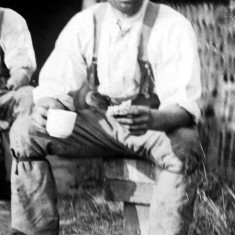 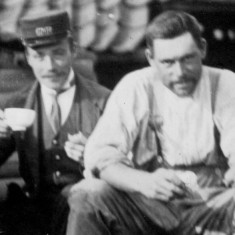 A visitor from the railway. Detail of 12. 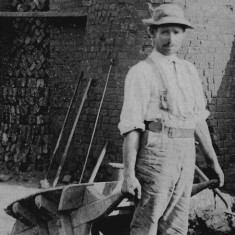 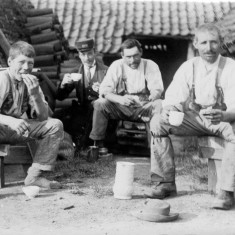 Picture 12. The workers enjoy their snap.

1884 O.S. Map showing position of brickyard next to the railway.

We are grateful to Mrs Jean Round of Allington for permission to use these fascinating photographs which show the process of brickmaking in the Beckinthorpe brickyard. Mrs Round believes the photographs show her grandfather, or possibly her great grandfather, who worked there. She believes her ancestor was one of the last people to know the secret of making the ‘Bottesford Blue’ tiles.

A variety of brick-making machines were invented between 1820 and 1850, but the process shown in the photographs appears to be very close to the unmechanized methods of slop-moulding which were introduced in the late C12th. These photographs appear to date from the early years of the C20th. Although most bricks were machine made by this date, a number of small local brickyards  with open-topped kilns survived, some until as late as 1939, when black-out regulations forced them to close.

In the C19th there were two brickyards in Bottesford. Thomas Hoe’s yard was on the other side of the road from Bridge House, where he lived. The other brickyard was Challand’s yard, in Beckinthorpe, on the site now occupied by the recycling tip.

The Lias clay used in the Beckinthorpe brickworks would have been dug nearby and piled into heaps for the rain and frost to weather it. In April the clay was turned over, tempered with water and loaded into the pugmill, a wooden or iron tub with knives to knead the clay which were turned by a horizontal shaft. Clay was fed into the mill from the top and the kneaded clay squeezed out from the bottom. It was then barrowed to the moulding bench.

Pugmills were usually horse-driven, though there is no horse in evidence in these pictures. Children, like the boy in this picture, were often employed to fetch and carry. The work was seasonal, because of the need to dry the bricks before firing. The process of drying took about three weeks, depending on the weather. The firing process would take at least another two weeks. Coal for the kiln would have come from the railway close by.

We contacted the Association for Industrial Archaeology to ask if they could tell us anything about the clamp shown in the picture and we were delighted to get two very prompt replies. Mike Nevell, Director of the University of Manchester Archaeological Unit, has kindly sent us the following information.The kiln in picture 11 is defintely a clamp kiln of the kind used in the South and East into the twentieth century to make stock bricks. These kilns were temporary brick structures, made using bricks that contained at least part of the fuel necessary for the firing mixed in with the clay prior to making the bricks. Picture 11 shows the main clamp kiln with what appear to be corner buttresses, whilst picture 10 shows the top of the kiln, with the roof of another  building (probably for moulding the bricks) in the background. Only a handful of clamp kilns have been excavated in Britain and most of these tend to be early, that is seventeenth or eighteenth century (such as the one excavated by the University Manchester Achaeological Unit at Davenham in Cheshire about 10 years ago) but many more have recently been excavated in Southern Ireland.

Another AIA member, Tony Crosby from the Heritage Lottery Fund, has sent us this additional information. ” To build a clamp a foundation layer of burnt bricks was laid on a piece of ground to provide insulation from rising damp. The ‘green’ bricks were stacked above it, spaced apart to allow the fire gases to circulate. Fire chanels were formed in the base and the whole covered with combustible material, burnt bricks and earth, as can be seen in Picture 9. The clamp was then ignited by small fires started in special flues in the base. These in turn ignited the fuel mixed with the clay in the ‘green’ bricks. This process of burning often took several weeks before the clamp was allowed to burn itself out.It looks from the image of the two men that they are making clay drainage pipes as well.”

We would like to thank Mike Nevell of UMAU, Tony Crosby, Policy Officer, Heritage Lottery Fund  and James Gardiner of the Association for Industrial Archaeology for their help.