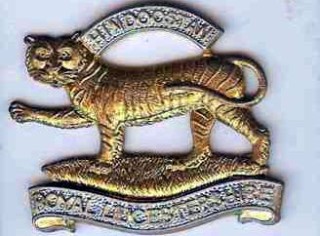 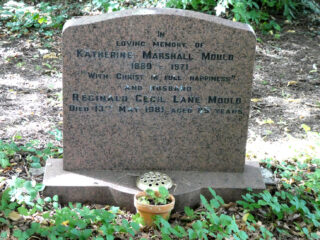 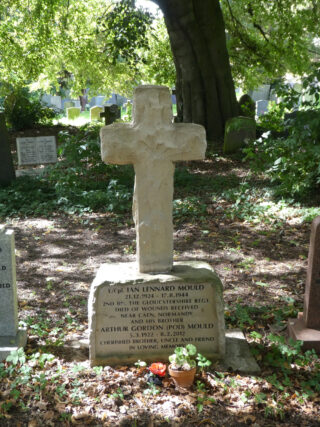 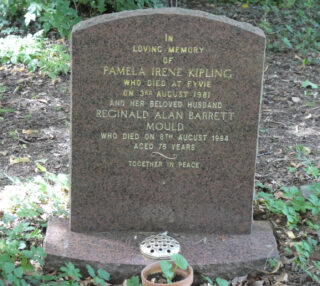 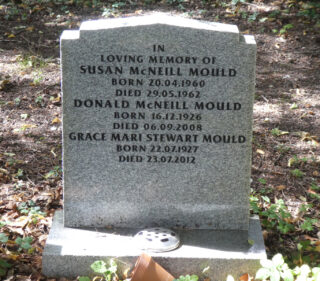 Reginald Cecil Lane Mould enlisted in 1914 from the OTC at Cambridge University. He joined the 5th Leicestershires in their deployment in the Ypres Salient, but was brought back to hospital in England in September, 1915. He remained with the Leicestershires, and started married life 1918. His wife was Katherine Marshall Barrett. In the 1930s, he brought his family to live in Three Gables, the striking Arts and Crafts house in Easthorpe, having started Mould & Bloomer’s timber business in the 1920s.

Reginald Cecil Lane Mould, born in 1891, was the son of William and Elizabeth Ann Brown Mould (nee Lane), of the Manor House, Great Easton near Market Harborough, Leicestershire.This was a prosperous farming family: William left over £15,000 in his will of 1900. Reginald was the youngest of the family, having four brothers. The oldest was William, who gained his MA at Ridley Hall, Cambridge, became a clergyman at Belper and then, by 1915, was vicar of St John’s, Highbury Park, London. The next, Richard, was a surgeon, while the others, Charles and Thomas, continued farming.

Reginald was educated privately. The census of 1901 records him, aged 9, at a small private school belonging to Robert Lykes, at Grange Farm, Geddington, where he was one of five pupils taught by Lykes’ daughter Elizabeth Ann Lykes and niece Elizabeth Ann Sheffield. In 1911, Reginald was living at 78 South Croxted Rd, Dulwich, the home of a private tutor named Herbert Conran-Smith. By this time he was a matriculation student, aged 19. His name is found in the Dulwich College Register, which tells us that he was born 26th November, 1891, and that he graduated from Emmanuel College, Cambridge, in 1919, following his wartime service. Assuming that he passed the matriculation examination in 1911, he would have entered Emmanuel later that year and been close to graduating when war broke out in 1914. While at Cambridge, he became part of the Officer Training Corps (OTC) and would have been eligible for rapid acceptance into the army when the time came, but did not actually receive his degree until he left the forces at the end of the war.

The London Gazette of 29th September, 1914, reports that Cadet Reginald Cecil Lane Mould from the 1st Cambridge Contingent Senior Division, Officer Training Corps, was appointed 2nd Lieutenant in the 5th Battalion of the Leicestershire Regiment on the 17th August, 1914. A second Gazette entry from the 20th October, 1914, repeats this but gives his appointment date as 21st October, 1914. Either way, it is clear that he moved from the OTC to become an NCO in the newly formed regiment. An entry in the Grantham Journal, 24th October 1914, also gives the 24th October, 1914, as the date he joined the Leicestershires. The 5th Battalion was part of the Territorials, formed in August 1914. It landed in France at Le Havre in February 1915 and was deployed in the Ypres Salient as part of the 138th (Leicester and Lincoln) Brigade of the 46th (North Midlands) Division. Reginald Mould would have been one of its first batch of NCOs.

There is a record of RCL Mould, b.1891, Lieutenant, 5th Leicestershires, referred to as an officer with the British Expeditionary Force (BEF), being admitted on the 25th September, 1915, to Queen Alexandra’s Military Hospital at Millbank, transferred to Samuelson Hospital and then discharged on the 30th September that year.

No later service records have been found, except his Medal Index Card, which indicates that he was awarded the Victory Medal, British War Medal and the 1915 Star.We do not have the date of his promotion to Captain. He most probably remained in service at least until the armistice, the MIC indicating that he became eligible for a Silver War Badge on the 30th January, 1919, implying that he suffered long term medical problems arising from his army service, but the record of his date of final discharge has not been found.

Life after the First World War

Reginald became engaged to Katherine Marshall Barrett of Sawbridgeworth, Hertfordshire. Their banns were read at Bringhurst, Leicestershire, between January 13th and February 3rd, 1918, but as was noted in the register “the parties had changed their plans”. His brother William died on January 21st. Reginald and Katherine moved their wedding to the parish church at Sawbridgeworth, Katherine’s home parish, on February 9th.

In the electoral roll of 1921, Reginald and Katherine were listed living with her parents at The Drive, Sawbridgeworth, then Kelly’s Directory of 1924 records a Captain Reginald Cecil Huntley Mould as a private resident at Peaslake, Surrey (presumably the name ‘Huntley’ is a clerical mistake). Electoral rolls from 1924 and 1925 locate him in Westmoreland on “land at Harrowslack (abode at Peaslake, Surrey) … near Far Sawrey”. In 1931 the electoral roll puts Reginald Mould at “land at Claife [Westmoreland], abode at Brant Howe, Windermere”. In the 1920s, he started a business partnership with Lieutenant Leonard Bloomer, who had served in the Warwickshires and been serioiusly wounded at Gallipoli. In 1927, the Yorkshire Post described Bloomer as “one of the partners in the Forest Tree Nurseries on the western shore of Lake Windermere”, and his obituary of 1971 described Leonard Bloomer as “a partner in Mould & Bloomer since 1929”.

Reginald Alan Barrett Mould, baptised in Cambridge on the 20th March, 1919, died on the 6th August 1994 and was buried at Bottesford, aged 75. He had commenced training with the army on the 2nd September, 1939, been appointed a 2nd Lieutenant in the Leicestershires on the 9th March 1940, reaching the rank of Captain on the 8th October, 1941. His wife, Pauline Irene Kipling, died “at Fyvie” on the 3rd August 1981, aged 58, and is buried with her husband at Bottesford.

Ian Lennard Mould, born on the 21nd December, 1924, tragically lost his life aged 19 on the 7th August, 1944, near Caen in Normandy, following the D-Day Landings. He was a Lance-Corporal in the 2nd Gloucestershires. His grave, in Bottesford churchyard, is a Commonwealth War Grave, but also contains the burial of his brother Arthur Gordon.

By the 1930s, Reginald Mould had brought his family to live Three Gables, Manor Road, Easthorpe, where he lived until his death. Katherine Mould died in the 11th May, 1971, aged 82. Reginald Mould died in 1981 and was buried on the 16th May, aged 89. They lie together at St Mary’s.