Stand beneath the market cross 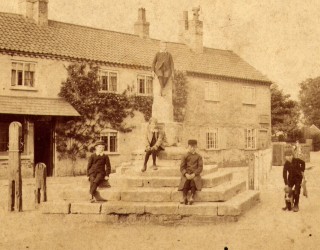 Stand beneath the market cross,
Sense resonances
Imprinted on the atmosphere,
A Michaelmas Fair,
Scents of cinnamon and apples,
Red ribbons for a sweetheart,
Sweetmeats for a child,
A fiddler plays a jig while
Deals are done over jugs of ale
Servants hired, bargains made,
And bets are laid.

Shrove Tuesday revels,
A boisterous ball game
Ending, some say, in tragedy,
For a Fair Maid of Normanton
Laid in the graveyard.

And the rattle of a plague cart,
Rolling through deserted streets,
Carrying corpses of the Black Death.

A witch whipped, screaming,
Through streets echoing
With the howling cacophony
Of a barbaric rabble,
A thief in the stocks, pelted
With stones and stinking horse dung.

And under your feet feel
Reverberations of wars,
Heavy footsteps, knocking on a door,
A telegram, a son dead on the Somme.

The throb of a returning Lancaster,
Dull thud of exploding bombs.

Listen as their names hang in the air.