from a short story - read by the former Winn's Store, Queen Street 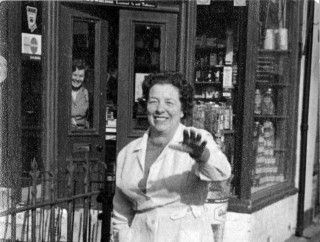 The threepenny bit was solid in her hand.  She sniffed her palm. The damp, brassy smell meant Rainbow Drops and Flying Saucers and Everlasting Toffee, her reward for fetching five Player’s Weights for Aunty Gladys.

She looked in the window of the corner shop, draped with sheets of torn yellow cellophane to keep the sun off. “Invisible Hairnets,” packets of kirbigrips and “Rain Mate” hats were piled in one corner. In the other was a pyramid of pretend packets of Brooke Bond Tea and boxes of Cherry Blossom Shoe Polish. Black Jacks and Fruit Salad in their display cartons were piled up next to the bleached lemon cardboard tubes of the Sherbet Dips. Dead bluebottles lined the bottom of the window. They’d been there a long time.

The shop bell rang as she opened the door and breathed in the smells of rough wooden floorboards, hessian sacks of potatoes, cabbage, apples and tobacco mixed with Spanish liquorice and aniseed balls.

Her nose was at counter level, where the glass jars were full of Rhubarb and Custard, Pear Drops and the Winter Mixture the old ladies loved. The Rainbow Sherbet was next to a big glass jar of lollipops. You could have two ounces of yellow and pink sherbet crystals, weighed out on the brass scales. Mrs Davies would put the smallest of the heavy round weights on one side of the scales, and scoop sugary grains on to the big brass bowl.  The scales would swing like a see-saw. Sometimes she would add a bit with the scoop, and your heart would go up, and sometimes your insides went down with the scales when she took a bit away. But then each side would balance perfectly in the air, and quickly she would tip the sherbet into a three cornered bag torn from the nail, drop a red or yellow or green lollipop in it and twist the top of the bag shut. You dipped your lolly into the sherbet and sucked, and your tongue would go yellow. She gazed at the layers of sherbet in the glass jar. But today, she decided, she would have a Jamboree Bag, faded two shades of blue from the window, with a big boy scout on the front in his ten gallon hat. She felt she would be lucky today.  And she still had a ha’penny left. That would buy two blackjacks, or a gobstopper, or a tiny cellophane packet of YZ chewing gum, strawberry and lemon and blackcurrant flavour, little rectangles of colour like jewels.  She knew that if you swallowed chewing gum you would die.  Nasty, it was. Clogged up your insides.  She picked up a packet.

“Does your mammy know?”

But her fingers were crossed tightly behind her back.