Time Out of Space 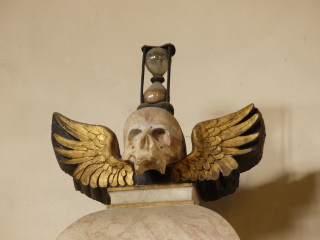 The memento mori on top of the tomb of the 5th Earl of Rutland in the chancel of St Mary's, Bottesford: a skull with gilded wings, an hour glass on the crown of the skull
Neil Fortey, 10/11/2013

In the chantry of St Mary’s a day was measured in prayer,
Prime, terce, vespers, compline,
Stillness of an ordered life,
Familiarity of ritual,
Acknowledgement of transience, of the temporal,
Time measured by paths of sun and moon,
Marked by a slow tolling bell.

Mutability, a constant trope of
Renaissance poets and artists who
Warned of the brevity of mortality,
A child holding a skull, a winged hourglass
Surmounted by a death’s head,
An alabaster cadaver emerging from a winding sheet,
As I am so shall you be.

And then – the oscillation of a pendulum,
Clocks on mills and manufactories,
Synchronised railway timetables,
Time measured by profit and loss,
Production and distribution,

But in the spaces between the ticking of an analogue clock
And the segueing of one digit into another
Is a parallel time out of space,
Transcending the arrogance of measurement.

In the gaps and silences between the restless frenzy of deadlines
Is the blue iridescence of a starling’s wing,
The defiant exuberance of a dandelion,
Vibrant yellow against grey slate.

Between the tyranny of the timetable and the target
Is a space where a child’s laughter rises above the roar of traffic
And the peacock sheen of a butterfly’s wing shows bright
Against dusty green weeds.
Beyond the saturation bombing of human senses,
The obscenity of precision timed carnage
Is a transcendence conveying an indefinable, immeasurable,
Numinous glimpse of immanence.