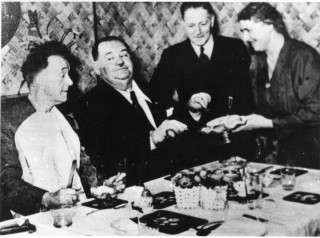 Stan Laure; (left) and Oliver Hardy dining at the Bull, with Olga Healey and her husband - she was Stan's sister. Oliver & Hardy, the American movie comedians, were touring England in 1953.
Picture contributed by Mr John Cooper

“I’m Oliver Hardy and this is my friend, Stan”,
Was his genial introduction to the regulars
At The Bull.  With a coy shrug of shoulders,
Stan moved his lined face into his trademark
Gormless grin, acknowledging trans-Atlantic
Recognition.  They needed no introduction.

Yuletide drinkers were already
Anticipating that before very long, “the boys”
Would proceed to inadvertently
Demolish the bar of Stan’s Sister’s public house,
As they did various properties in their films.

But no, now they were too old
For that type of clowning, Hardy, too big and
Stan, too slow.  Besides, it was Christmas eve
And The Bull was no Hal Roach set.

However, like true professionals
They kept their audience entertained,
Reworking old gags, as they helped
To serve behind the bar.  “Ollie, I thought
You said we were going out?”  “We are, as soon
As I get this aerial up.  You see, the wife
Wants to get Japan.”  “Gee, that’s swell, I’d
Like to get Japan, too.  Would you like me
To help?”  “That’s if you’ll help me.”

Eventually, house wrecked, car concertinaed,
Radio repossessed, the sun set on another nice mess.
Sun was setting too, on their remarkable lives.
Here, just before I was born, were heroes,
Who had made the sad century a bearable place,
Life worth living in laughter away from
The sordid truths of the Western Front, Auschwitz,
Dresden, Hiroshima and all the old atrocities
That we inflict in our determined nice messes,
Devoid of even black humour.

Laurel and Hardy were endearing
Innocents bewildered by an
Existential world. A cruel world
That they transcended in their humanity.
They were pawns in the chaos theory,
Stan flapped his wings turning a breeze
To a hurricane of laughter and belief
In the brighter, more human side, of
Our antithetical psychology.