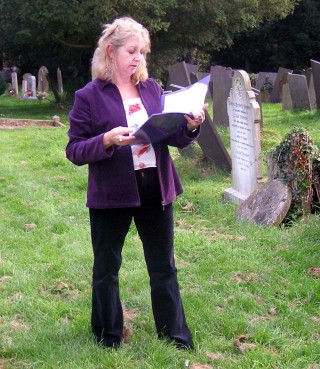 Sue Mackrell reads one of her works 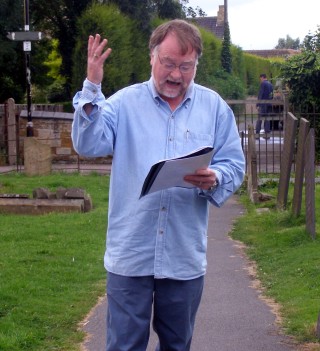 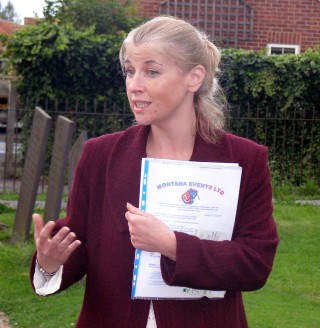 Read the poems by using the links in the column to the right.

Poetry Pathways came to Bottesford on August 16th. Three Leicestershire poets, Sue Mackrell, David McCormack and Jules Tobin, read new work written on themes suggested by features and stories of the village. On a mercifully dry, warm evening, like the Pied Piper of legend, Sue led her audience on a gentle walk from the library, around the church and churchyard, through The Green, to Winn’s corner, the Bull yard and the Cross. Then back to the library for wine and nibbles, and ending up in the Red Lion.

Sue Mackrell and fellow poet David McCormack live in far away Hinckley. Sue’s recent work is part of the Poetry Pathways project run by Kerry Featherstone and Leicestershire Library Services, which is taking poetry out to the towns and villages in our county. At least, it would had the weather not rained off most of its programme of outdoor events. Bottesford was last on their list for this year. Sue and David had already braved the elements (not to mention a rampant bear!) in Ashby de la Zouch, and now were boldly adding Bottesford to their achievements.

Their work was inspired by visits to Bottesford and reading material on the “excellent” (he said, modestly) Living History website. See places and hearing stories familiar to Bottesford folk, they produced their own impressions and ideas, creating a set of fresh original works that kept us well entertained and made us look at our surroundings with fresh eyes.

The third poet was Jules Tobin. Jules lives in Bottesford with husband John and son Will. She is an enthusiast for the theatre, and leads the Mermaid Group which meets to discuss and read the works of Shakespeare. Jules writes modern sonnets, and has completed a series based on Elizabeth Sydney, daughter of the Elizabethen poet and soldier Sir Philip Sydney, and fifth Countess of Rutland. A set of these moving works formed part of Poetry Pathways at Bottesford.

The poems from this event are printed in the other pages in this ‘tour’. Read the poems by using the links in the column to the right.