The Fair Maid of Normanton

An effigy, alone in the SW corner of the S aisle 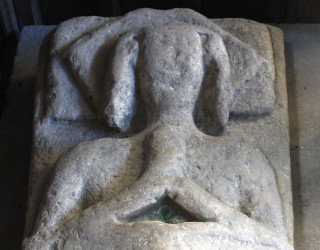 The weathered stone effigy popularly known as the Fair Maid of Normanton. It originally lay outside the church, and may have originated from the old church in Normanton, but nobody knows for certain.
Neil Fortey, 10th April 2012

“A somewhat flighty member
of the Belvoir Household,”
It says in the Church guide book,
The poor relation,
A bit of an embarrassment,
Buried in the churchyard first,
But moved to the back of the church,
By the door.

No better than she should be, you know.
Rumours of the manner of her death abound,
Smitten by a snowball at a
Shrove Tuesday bash,
Earwigs fell out of her ears,
So they say.

But we don’t talk about her much,
Not one of us, you know.