You are here: Home>Tags>Archive>Bottesford Local History Archive>BOT196: Stenwith Lock House, in 2007>The Lock House, view of the front of the house 11

The Lock House, view of the front of the house 11 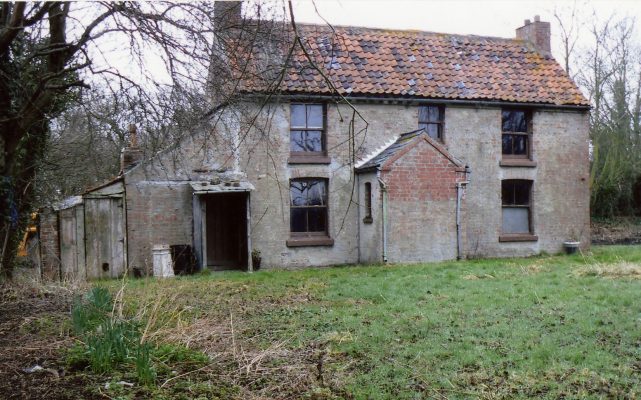 A view of the front elevation of the Lock House.

This picture shows the layout of the house clearly, with the front porch in the centre of the main elevation and two successive lean-to extensions at the left-hand end attached to the northwestern gable. The grassy area in front of the house is what remained of the grass paddock that had surrounded the house hitherto, before the developer started to clear away the remainder of the grass (as seen in the following pictures).

The layout of the house was that there were two main rooms to either side of the central passage from the porch: the dining room to the left, the living room to the right. To the left of the dining room was a lean-to kitchen, and further to the left a later lean-to housing the copper water heater used for the laundry. There was a small range in the kitchen lean-to, and another in the dining room, while the living room had its own open fire. At the back of the house was a stair case with a cupboard beneath it. The stairs led to a small landing and two bedrooms above the main ground floor rooms.

For two men sharing the house, this was adequately spacious accommodation, though the sersvices were primitive by modern standards. They accepted the limitations, and apparently were content to live in their tranquil seclusion.