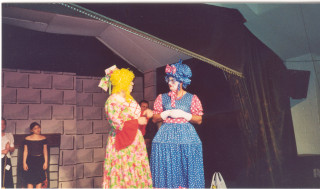 The Ugly Sisters - from Cinders The True Story 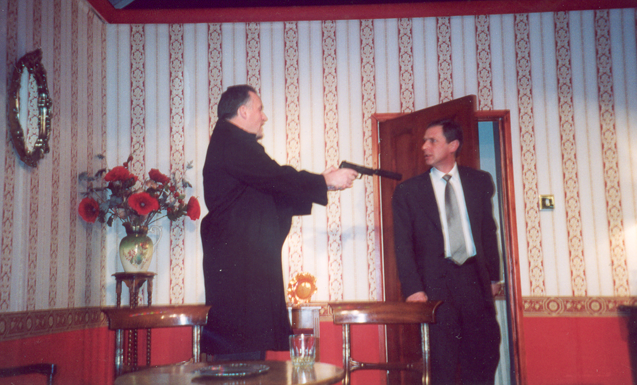 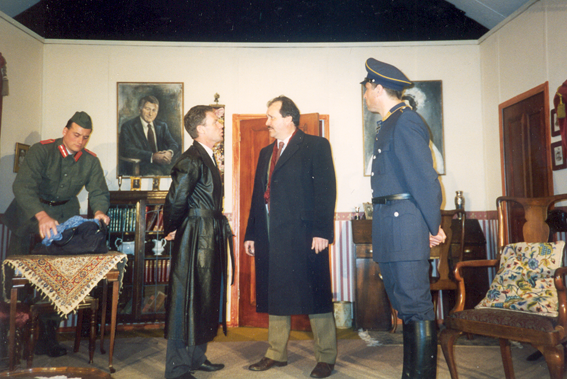 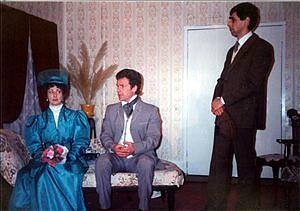 “BATS” was formed in October 1973 and was originally called Belvoir Amateur Theatrical Society. They met and performed at the Belvoir High School.

Their first performance was in April 1974 and consisted of two One Act Plays, “April Dawn” and “Wife Required” this was followed by a December production of “Cinderella”.

In 1976, rising costs at the school made the group look for an alternative venue.  The then vice-chairman Mick Hills, lived at Redmile and he proposed that the group move to the disused chapel in Redmile.  Mike negotiated the use of the chapel with the Bingham Methodist Circuit and BATS moved into their new home.

BATS constructed the stage and made the chapel its home from 1976 until 1985 when the Methodists sold the chapel to be developed as a dwelling.  So BATS moved back to Bottesford performing at the V.C. Hall or the Belvoir High School depending on the size of the production.  In 1990 the group changed its name to Bottesford Amateur Theatrical Society.

During the 1980s BATS collaborated with “BYTS” – Belvoir Youth Theatre, a group for 10-14 year olds run by Julia Burton at the High School – for two productions – “Our Day Out” and “The Monster that Ate 3B”.

A total of 32 productions were stage by “BATS” from 1980 to 2001 and were very well received.  Large elaborate productions such as “Dracula – A Pain in the Neck” and “The Curse of the “Werewolf” were staged at the High School.  One set productions were done at the VC Hall, the limited space used very effectively by clever set designs.

Following the success of a very funny pantomime “Cinders – the True Story” “BATS” faced an old problem. The loss of our venue.

Following an energetic program of fund-raising and a Lottery grant the V.C. Hall was demolished in 2003 and work started on building a new village hall for Bottesford.

During the spring and summer of 2003 the new Victory Commemoration Hall rose like a phoenix from the ashes and “BATS” returned to a new improved venue with modern lighting and sound system, with a control room, dressing rooms and a larger stage, which no longer disappears into the gentlemen’s toilets!

The new facilities were much appreciated and “BATS” were delighted to bring back “Harvey” in November 2003.

It was with great sadness that on 22 February 2004 Suzanne Howitt our Treasurer and Archivist died.  She had been a member since the 70’s, she had performed and directed and will be greatly missed.

New members to “BATS” brought a different dimension to the group and new ideas were tried out.

A production of “Access Rights” was staged in March 2005, this was written and directed by Mark Pugh.  Details of Mark’s theatrical experiences can be viewed on his web site http://www.markpugh.com/info.htm>.

In August 2005 “BATS” entered the Grantham Comedy Festival with a One Act Play written and directed by Andy McDonald, this was a spoof on the Bond theme and titled “Waiting for M”.  This was very well received and was a marvelous first effort from Andy.

Mark presented an evening of entertainment in April 2006 titled “Big Night Out” including sketches and musical interludes.

Sadly we lost another stalwart member of the group in April 2008, Beryl Stott was a much loved lady who had directed as well as performed in many productions since the 1970’s.

“BATS” have been slumbering for a while and we hope to bring back to the stage a production in the near future.

New members are always welcome for either backstage or acting roles, if interested please ring Linda & Geoff on 01949 842423. If viewing the pictorial archive Geoff’s the one in the blue dress!