A soldier from a forgotten WW1 conflict 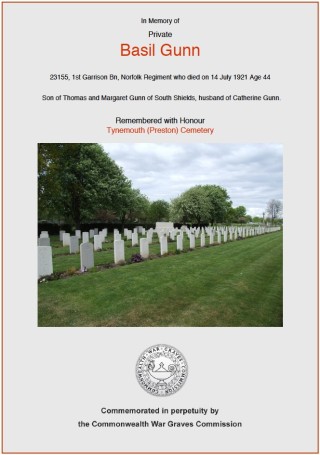 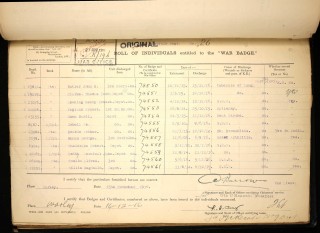 My grandmother lived with our family while I was growing up, having moved from her home in the North East after the death of her husband.  She often spoke about her sisters but never mentioned her brother Basil, my great uncle, who had been 19 years her senior.

Basil’s father was a fisherman and often away for long periods of time, rarely surfacing in the Census returns, leaving Basil as the ‘man of the house’.  His mother, 6 sisters and much younger brother lived with him at the family home.   In the late 1890’s Basil, then a grocer’s assistant, volunteered to fight in the Boer War. Basil survived the Boer War and returned to marry Catherine in Alnwick in 1901.  They had 6 children between 1901 and 1913.  Tragically all of the children died in infancy.

His name is on a brass memorial plaque now housed in The Land of Green Ginger (a former chapel) in Tynemouth.

Basil joined up again to fight for his country in WW1.  Many people, including me, think only of the fields of Flanders when WW1 is mentioned, yet on enlistment Basil was placed into a ‘Garrison Battalion’ namely 1st Garrison Battalion Norfolks, which became part of the Indian Army – the Karachi Brigade, 4th Quetta Division.

Garrison Battalions were made up of soldiers deemed unfit for front line duty – a decision made at the time of enlistment.  The recruits were sent to various parts of the empire on garrison duties to release fit soldiers for front line duty.  The 4th Quetta Division was deployed to maintain internal security and defend the North West Frontier against incursions from Afghanistan and as such was involved with defending the frontier against large groups of tribesmen in many violent conflicts and in difficult circumstances – despite being ‘unfit’ or too old when they were recruited.  In the notes of an officer who also served on the North West frontier; “severities of heat and biting cold almost undreamed of in England were, time and again, the inevitable lot of the soldiers who so bravely kept the peace for Britain on the Indian Frontier.”

The Garrison Battalions were disbanded within days of returning from service overseas and their service was apparently regarded as of little consequence in regimental history.

Basil was discharged from the army in 1916 due to ‘heat stroke’.

The Indian army had a hospital for people with this condition at Deolali – hence our unkind use of the word ‘doolally’ for someone who has mental health problems.  Basil died in 1921 as a patient of Morpeth Asylum, and is buried in a Commonwealth War Grave in Preston, North Shields.