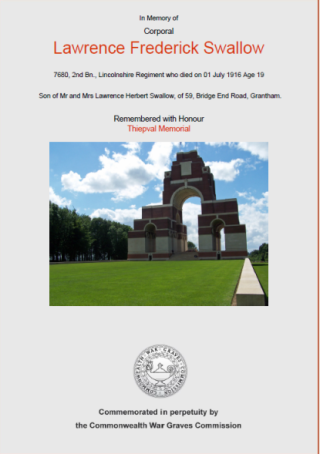 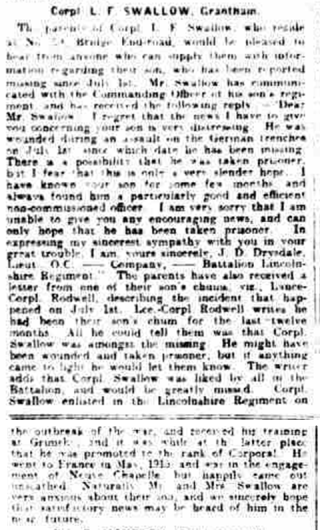 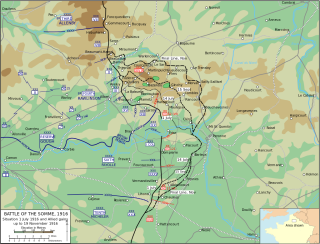 Map of the Battle of the Somme, 1916
Wikipedia

On 1st July, 1916, Corporal Lawrence Frederick Swallow, 7680 2nd Battalion, Lincolnshire Regiment, lost his life during the infamous opening day of the Battle of the Somme, aged 19. He was the son of Mr and Mrs Lawrence Herbert Swallow, who lived at 59, Bridge End Road, Spitalgate. He enlisted at the outbreak of the war in 1914, aged just 16, and landed in France on 25th May 1915, following training at Grimsby.

Lawrence Frederick Swallow’s father was the seventh of the nine children (the fourth of five sons) of William and Annie Swallow of Casthorpe Road, Barrowby, Lincolnshire, as recorded in the 1881 census in which William Swallow gave his occupation as Miller, Malster and Coal Merchant. The 1891 census records another child, their last, named Alfred B Swallow, born 1882, who was thus Lawrence Herbert’s younger brother. By this date Lawrence Herbert Swallow had been taken on as an apprentice by Joseph Moore (Baker and Poor Rate Collector) and his wife Amy, and was living in the Moore household at Stamford. He married Florence Amy, the elder of Joseph and Amy’s daughters, and by 1901, the young couple had set up home at 50, George Street, Grantham, and had two children, Lawrence Frederick, aged 3, and Annie, aged 1. By 1911, the family had moved to 59 Bridge End Road, and Lawrence’s father now gave his occupation to that of Coal Merchant.

The census information confirms that Lawrence Frederick Swallow was a nephew of Alfred Bailey Swallow, Viv’s grand-father, who was to lose his life on 21st March, 1918, during the opening day of fighting of the Battle of St Quentin, the opening stage of what became known as the “1st Battle of the Somme, 1918”.

On 29th July 1916, the Grantham Journal reported that he was missing in action, and that his parents were seeking information in the hope that he had been injured and taken prisoner, rather than killed. Sadly, this was to prove a forlorn hope.

The parents of Corpl Swallow who reside at No.59, Bridge End Road, would be pleased to hear from anyone who can supply them with information regarding their son, who has been reported missing since July 1st. Mr Swallow has communicated with the Commanding Officer of his son’s regiment. and has received the following reply. Dear Mr. Swallow, I regret that the news I have to give you concerning your son is very distressing. He was wounded during an assault on the German trenches on July 1st since which date he has been missing. There is a possibility that he was taken prisoner but I fear that this is only a very slender hope. I have known your son for some few months and always found him a particularly good and efficient non-commissioned officer. I am very sorry that I am unable to give you any encouraging news, and can only hope that he has been taken prisoner. In expressing my sincerest sympathy with you in your great trouble, I am yours sincerely, J.D. Drysdale, Lieut. O.C.—Company, – Battalion Lincolnshire Regiment.” The parents have also received a letter from one of their son’s chums, viz. Lance Corpl Rodwell, describing the incident that happened on July 1st. Lce-Corpl Rodwell writes he had been their son’s chum for the last twelve months. All he could tell them was that Corpl. Swallow was among the missing. He might have been wounded and taken prisoner, but if anything came to light he would let them know. The writer adds that Corpl. Swallow was liked by all the Battalion, and would be greatly missed. Corpl. Swallow enlisted in the Lincolnshire Regiment on the outbreak of the war and received his training at Grimsby, and it was while at the latter place that he was promoted to the rank of Corporal. He went to France in May 1916 and was in the engagement at Neuve Chapelle, but happily came out unscathed. Naturally, Mr and Mrs Swallow are very anxious about their son, and we sincerely hope that satisfactory news may be heard of him in the near future.

First day on the Somme, 1 July (from Wikipedia)

The first day on the Somme began 141 days of the Battle of the Somme and the opening day of the Battle of Albert. The attack was made by five divisions of the French Sixth Army either side of the Somme, eleven British divisions of the Fourth Army north of the Somme to Serre and two divisions of the Third Army opposite Gommecourt, against the German Second Army of General Fritz von Below. The German defence south of the Albert–Bapaume road mostly collapsed and the French had “complete success” on both banks of the Somme, as did the British from the army boundary at Maricourt to the Albert–Bapaume road. On the south bank the German defence was made incapable of resisting another attack and a substantial retreat began; on the north bank the abandonment of Fricourt was ordered. The defenders on the commanding ground north of the road inflicted a huge defeat on the British infantry, who had an unprecedented number of casualties. Several truces were negotiated, to recover wounded from no man’s land north of the road. The Fourth Army lost 57,470 casualties, of which 19,240 men were killed, the French Sixth Army had 1,590 casualties and the German 2nd Army had 10,000–12,000 losses.

This detailed account of the fighting on July 1st is given in the following rather harrowing extract, which has been copied from: War Diary or Intelligence Summary of 2nd Battalion Lincolnshire Regiment

Everybody was in position by 3.30 a.m. and the wire along the whole of our front reported cut by 2.30 a.m., 2nd Lt Old [this name may be incorrect – it was hard to read the hand-writing at this point] and a few men got wounded doing this, and Lt Ross’ parts had trouble owing to a continuous hostile machine gun fire. Brigade line was checked at 5.30 a.m.

6.25 a.m. The intensive bombardment commenced to which the enemy retaliated on our front line and assembly trenches with high explosive shrapnel.

7.25 a.m. Companies started to move forward from their assembly positions preparatory to the assault. The three assaulting companies getting their 1st two waves out into no man’s land, and the 3rd and 4th waves out at zero hour. These arrangements were carried out most excellently, no itch occurring, but casualties were fairly heavy from machine gun fire. The support company got into our front line trench but suffered a lot of casualties from shell fire.

7.30 a.m. As soon as the barrage lifted the whole assaulted. They were met with very severe rifle fire and in most cases had to advance in rushes and return fire. This fire seemed to come from the German second line, and the macine gun fire from our left. On reaching the German front line they found it strong;y held and were met with showers of bombs, but after a very hard fight about 200 yards of German line were taken about 7.50 a.m. the extreme right failing to get in and also the extreme left where there appeared to be a gap of about 70 yards although bits of platoons of the 70th Brigade joined them. The support company by this time joined in. The few officers that were left gallantly led their men over the German trench to attack the second line but owing to the rifle and machine gun fire cold not push on. Attempts were made to consolidate and make blocks but the trench was so badly knocked about that very little cover was obtainable from the enfilade machine gun fire and continual bombing attacks which were being made by the enemy the whole time and one frontal attack from their second line which we repulsed.

9 a.m. This isolated position became untenable, no support being able to reach us owing to the intense rifle and machine gun fire. Our left being driven back the remainder which by now only held about 100 yards had to withdraw. On reaching our own front line all the men that could be collected were formed up and tried to push on again but the heavy machine gun and rifle fire made the ground quite impassable.

1 p.m. Orders were received from the Brigade to withdraw to Ribble and Melling Streets and occupy the assembly dugouts there which was done.

12 mid-night  We were relieved by the 6th West Kents and proceeded to Long Valley.

This action took place at the start of the Battle of the Somme, when the sets of British and German trenches lay between Ovillers and Aveluy in the area north of Albert, Picardy. On this day the German army inflicted a severe defeat on the British Army in which a huge number of men were killed.

Western Front, Battle of the Somme