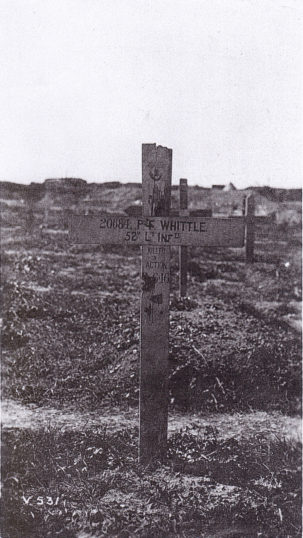 Frederick William Whittle is one of the men whose military record was found by Trevor Lewis and Sheila Marriott, to whom we are grateful. He was born in Bottesford, but his family had moved to Nottingham by the turn of the century. He was killed in action in June 1916.

Frederick William Whittle was born on the 2nd November, 1884, and baptised at Bottesford on the 30th November, 1884, son of James and Elizabeth Whittle. In 1891, James Whittle was a 39 year old farmer at what was known as Wittles Farm, The Green, Bottesford. With him was his wife Elizabeth, also aged 39, an children Frederick (6), Mary (2) and baby Lucy. There were also a slaughterman, a waggoner and a domestic servant. James came from Thorpe Arnold, near Melton Mowbray, but Elizabeth was probably from Bottesford, where all three children were born.

In 1901, the family had moved to 47 Goldsmith St., Nottingham, where James described himself as a dairy produce salesman. Frederick was now 16, a ‘taker off [in the] lytho department’, and there was also another son, Walter, aged 13, as well as daughter Marion (Mary), now aged 12. Te household also included brother-in-law John N Dolby, a 40 year old ‘stationer’s lifter’, and two boarders, a stationer’s assistant named Henry Whitfield, and Robert Pocock, another stationer’s assistant.

Frederick Whittle enlisted at Nottingham, and joined as Y/1629, the King’s Royal Rifle Corps. Later he was transferred and became 20684 Private, 2nd Battalion Oxford and Buckinghamshire Light Infantry. He was Killed in Action on the 3rd June, 1916, and was buried at Zouave Valley, Souchez, Vimy Ridge.

The 2nd Battalion was part of the regular army, and mustered in August 1914 in Aldershot as part of 5th Brigade in the 2nd Division, and landed at Boulogne on the 14th August, 1914 (from The Long Long Trail). It fought in numerous battles from 1914 to 1918. The date of Frederick Whittle’s death suggests that it happened in minor actions during the build up to the start of the Battle of the Somme.

There is a photograph of the original battlefield cross (shown here) that was erected during the war to mark his grave in France (we are grateful to Mr G.M. Brassington for this).

Frederick’s brother, Walter James Whittle, was born in 1887, and was recorded in 1939 as a law clerk living at Radcliffe Drive, Bingham, with his wife Beatrice and son Peter who was still at school. No military or other records of him have been found.

Killed in action
Served in
Oxford and Bucks Light Infantry (1)