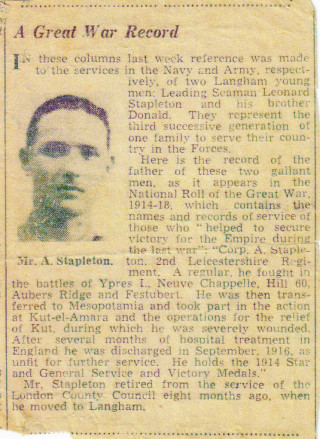 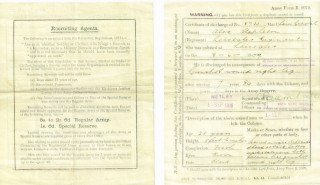 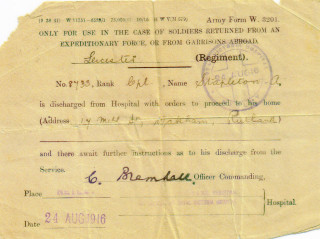 Alex Stapleton was the grandfather of John Stapleton, who lives in Bottesford at the present day. The family have a small set of heirlooms regarding Alex Stapleton’s service record:-

Family heirloom: a newspaper article [the date and ID of the newspaper are not indicated] entitled “A Great War Record”:

Leading Seaman Leonard Stapleton and his brother Donald … third successive generation of one family to serve their country … Here is the record of the father of these two gallant men, as it appears in the National Roll of the Great War 1914-18 … “Corp. A Stapleton, 2nd Leicestershire Regiment. A Regular, he fought in the battles of Ypres I, Neuve Chapelle, Hill 60, Aubers Ridge and Festubert. He was then transferred to Mesopotamia and took part in the action at Kut-el-Amara and the operations for the relief of Kut, during which he was severely wounded. After several months of hospital treatment in England he was discharged in September, 1916, as unfit for further service. He holds the 1914 Star and General Service and Victory Medals”. Mr Stapleton retired from the service of the London County Council eight months ago, when he moved to Langham.”

Alex Wilfred C. Stapleton was born in Kettering in 1897.

In the census of 1911, they were at Braunston Fields, Braunston, Rugby, Northants. Albert Stapleton, 43, was now a farm foreman, and Lucy was 41. Mable had left home by now and was not recorded. Leonard, aged 19, was employed as a farm labourer, Ethel was 15, Alex was 13 and working on farm, Reginald was 12 (at school), and there were two more children, Lily, aged 6, born at Rushden, and 3 year old Cecil, who had been born at Stuckbury, Northants,

Alex Stapleton served as 8733 2nd Battalion, Leicestershire Regiment, from 1909 to 1916, when he was discharged following a severe injury and was judged no longer physically fit for active service.

After enlisting as a Private he rose to Lance-Corporal and Corporal. However, he is recorded as having returned to Palestine and ended the war in Syria, possibly in a non-combatant posting.

The 2nd Battalion of the Leicestershire Regiment was part of the 7th (Meerut) Division of the Indian Army. On the 12th October 1914 it landed at Marseilles to join the British Expeditionary Force (the BEF). We know that Alex Stapleton was part of the 2nd Leicesters, and he fought in the 1st Battle of Ypres, and the Battles of Neuve Chapelle, Hill 60, Aubers Ridge and Festubert. It can be inferred that he was part of the 7th (Meerut) Division, and that he went subsequently with this Division to Mesopotamia. However, no confirmation of his date of enlistment has been located, not where he was first posted to.

On the 17th November, 1915, the 2nd Leicesters moved to Alexandria forming part of the 7th Division of the Indian Army.

This tells us that he was invalided out of the front line in 1916, but there are no details about his service career after being in hospital. The Silver Badge Roll record (see below) implies that he was still with the army in September 1916, but does not indicate where he was at this time or what his position was.

It is difficult to be more specific about the details of Alex Stapleton’s wartime experiences, but some general information about the record of his battalion can be provided, based on information in the Long Long Trail website and, more particularly, an article in Wikipedia.

12 October 1914 : Division landed at Marseilles for service in France.

22 January 1918: Landed at Suez and took part in Palestine campaign.

The 7th (Meerut) Indian Division was an infantry division in the Bengal Army (Northern Command) garrisoned at Meerut. In 1914 the Division was sent to reinforce the BEF in France. It landed at Marseilles on 12–14 October 1914, but there were delays moving forward while the troops were re-armed, and the supply train was improvised using tradesmen’s vans procured locally. The division finally got into action at La Bassee, 1st Battle of Messines and at Armentieres in October–November, 1914.

On the 13th August, 1915, General Sir John Nixon requested one of the Indian infantry divisions in France as reinforcements for his advance on Baghdad. The Secretary of State for India was anxious for the Indian infantry to be withdrawn before they had to endure another winter. They left the front line on 6 November, but their departure from Marseilles was delayed until after 25 December because of fear of submarine attack. The 7th (Meerut) Division finally arrived in Mesopotamia in Spring, 1916, and joined the Tigris Corps, too late to relieve the 6th (Poona) Division at Kut-al-Amara.

After the fall of Kut, the battalion eventually became part of the Indian Army Corps, participating in the capture of Baghdad in March 1917.

The Siege of Kut Al Amara (7 December 1915 – 29 April 1916) was the besieging of an 8,000 strong British-Indian garrison in the town of Kut, 100 miles south of Baghdad, by the Ottoman Army. The 6th (Poona) Division of the Indian Army, under Major-General Charles Townshend, had fallen back to the town after retreating from Ctesiphon, arriving around the 3rd December 1915. They had suffered significant losses and were down to around 11,000 soldiers (plus cavalry). General Townshend chose to stay and hold the position at Kut instead of continuing the march downriver towards Basra. Kut offered a good defensive position because it was contained within a long loop of the river. The problem was how to get supplies, since Kut was a long way from Basra.

After a month of siege, Townshend wanted to break out and withdraw southwards but his commander, General Sir John Nixon, saw value in tying down the Ottoman forces in a siege. Nixon ordered transports from London, but none had arrived. Townshend would not attempt an infantry retreat unprotected through hostile tribal lands without river transport.

The first attempt to relieve Kut (the Battle of Sheikh Sa’ad) came on the 6th January. The advance force, under Major-General George Younghusband, made contact with the Ottomans 3.5 miles east of Sheikh Sa’ad. British efforts to defeat the Ottomans were unsuccessful. The following day, 7th January, Younghusband led the attack on the left bank and Major-General Kemball took the right. After heavy fighting all day, Kemball’s troops had overrun Ottoman trenches on the right bank, taking prisoners and capturing two guns. However, the Ottoman left bank held firm and they carried out supporting manoeuvres from the north. After little change on 8 January, renewed British attacks on 9 January resulted in the Ottomans retiring from Sheikh Sa’ad. Over the following two days the Ottomans were followed but heavy rains made the roads virtually impassable. Alex Stapleton was probably present during these actions, but appears not to have been seriously wounded during them.

The 7th (Meerut) Division took part in the Battle of Hanna, on January 20th/21st, but this was significantly before the date when Alex Stapleton was reported wounded. A later major engagement was the Battle of Dujaila, on the 8th March 1916, when the Anglo-Indian relief force lead by Lt-Gen Aylmer again suffered heavy losses; Aylmer was subsequently removed from his command. However, it is not certain that the 2nd Leicesters took part in this engagement, and in any case Alex Stapleton had already been admitted with gunshot wounds on March 6th. Indeed, without the battalion war diary, it will probably not be possible to specify where precisely he was wounded. (We hope to give more detail on the probable circumstances in which Cpl Stapleton was wounded).

There were further relief attempts, but none succeeded. The overall cost was very high. There were around 30,000 Allied (Indian and British) soldiers killed or wounded. Ottoman casualties are believed to have been around 10,000. General Townshend arranged a ceasefire on the 26th and, after failed negotiations, he simply surrendered on the 29th April 1916 after a siege of 147 days. Around 13,000 Allied soldiers survived to be made prisoners. James Morris, a British historian, described the loss of Kut as “the most abject capitulation in Britain’s military history.”

Alex Stapleton was married in 1923, at Ashby de la Zouch, to Margaret Jean Perkins, and died in the Leicester area, aged 70, in 1967. Both of the couple’s sons, Leonard and Donald, served during WW2.

The electoral roll for Coalville, in the autumn of 1921, records that at 17, Owen Street, Coalville, lived four registered voters: Lawrence Robinson, Alex Stapleton, Emma Powney, and George Robinson. This may well be the same Alex Stapleton, sharing a house after the end of the war, before he got married. He is also recorded as a voter in 1928 at Bourne, Lincolnshire, living at Willoughby Road, Bourne, with his wife Margaret Jeannie Stapleton. There is another record. In the population register of 1939, at 71 Mornington Street, Leicester, Alex W. Stapleton, a married railway guard born on the 8th April 1897, and his wife Margaret Stapleton, born on the 13th April 1897.