My Grandfather's experience in WW1 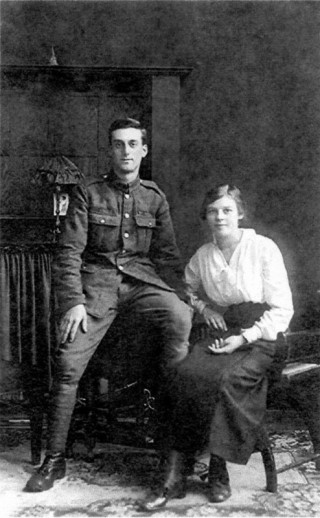 The only words I can remember my Grandfather saying about WW1 were ‘up to my neck in muck and bullets ‘! My uncle, who has spent a lot of time researching family history, has kindly sent me information about the experiences of grandfather Lewis during WW1 and provided the photograph of Lewis and his fiancée Hilda. These are described below.

In 1914, my grandfather Lewis, joined the Sherwood Foresters (5th Battn. Notts & Derbyshire Regiment) when it was formed at Derby on 16th October 1914 as a second line unit and they moved to Luton in January 1915.In August 1915 they formed the 176th Brigade and moved to Watford, being stationed in Cassiobury Park and it was there he met my grandmother Hilda.

In April 1916 the Brigade moved to Ireland to quell the disturbances in Dublin and in January 1917 they moved to Fovant, Wiltshire, landing at Le Havre on 26th February 1917.

Lewis was buried alive when a shell exploded as they were crossing a ploughed field on 9th April 1917. His cousin, Cpl William Spencer, aged 23, was alongside him at the time and was killed.

‘Billy Henry’, as he was known, is buried in the Vandencourt British Cemetery, Maissemy- Grave No:IV.A.8.

My grandfather was evacuated out of France on 13th May 1917 and was medically discharged from the Army on 5th September 1917 having spent 2 years and 326 days on Military Service.

He received a British War Medal and a Victory Medal as Campaign Medals.

After his return from France he had an abscess on a kidney and it was removed in the Derbyshire Royal Infirmary- a rare operation in 1918.

He suffered ‘shell shock’for the remainder of his life until his death in 1961.

The attacks of ‘shell shock’ occurred less frequently but were more intense as the years went by and during these incidents he was often unconscious for up to 30 minutes.

My uncle and father, had to get him flat on his back and not let him turn over. He would consistently repeat his experience in the trenches as though it was actually taking place and all the time they would massage his heart and wrists with mustard powder until he recovered consciousness.

It was a harrowing experience for everyone concerned and demonstrated the horrific experiences of war.