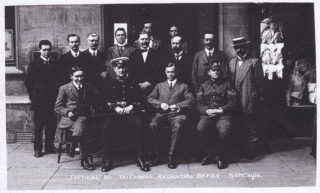 At Peterborough Recruiting Office, 10th September 1914. Walter Whittle is seen standing at the extreme left.
From the collection of Mr G.M. Brassington. 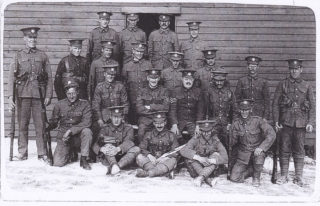 At Horsham a draft of troops preparing to go to France, taken on the 29th July 1915.
From the collection of Mr G.M. Brassington. 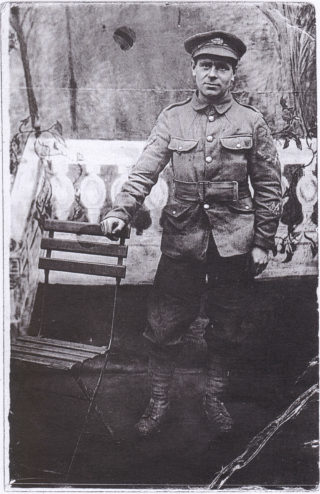 Walter Whittle photographed in December 1915, a "war worn hero" (self-styled, though no doubt true enough)
From the collection of Mr G.M. Brassington. 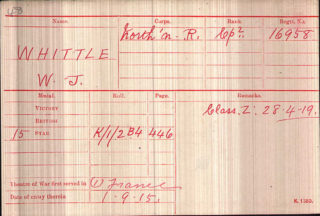 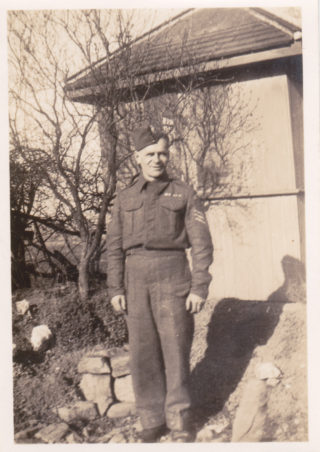 Walter Whittle, a sergeant in the Home Guard at Keyworth, in 1941.
From the collection of Mr G.M. Brassington.

Walter Whittle was one of two brothers born in Bottesford in the 1880s who both served with the army in the First World War. Their father had a farm in the village from 1885 to 1900, after which he and his family lived in Nottingham. The older brother, Frederick, sadly lost his life during the fighting in 1917, however Walter came through and went on to live and work in the Nottingham area until his death in 1953.

Walter Whittle was born in 1887, the second son of James Whittle and Elizabeth Whittle (nee Dolby). James Whittle was born in 1852 at Thorpe Arnold, a village just west of Melton Mowbray. His parents were Levi Whittle (1825-1869, born at Humby, Lincolnshire) and Eliza Goodson (1826-1916, born at Hose, Leicestershire). He appears to have been their only child. In the census of 1861 James Whittle was recorded living with his mother, Eliza, at the home of her unmarried brother, James Goodson, a farmer, at Indall’s Lodge, Thorpe Arnold. Curiously, she was listed as a widow even though records show that her husband Levi did not die until 1869. The reason for this discrepancy is not clear.

Eliza and James were still living with James Goodson in 1871, the farm now called Goodson’s Lodge, and again in 1881, when they had all moved to a farm in the nearby village of Freeby. James married Elizabeth Dolby (b.1851 at Waltham-on-the-Wolds, Leicestershire) in 1882, and it appears that they continued to live at Freeby for a couple of years before taking up a farm of their own at Bottesford, probably in 1885. They would have five children, Frederick William (born on the 2nd November 1884 at Bottesford, died in 1916), Walter James (born in 1887 at Bottesford, died and buried at Keyworth, Nottinghamshire, in 1953), Marion Emily (born probably in 1889 at Bottesford), Lizzie Dolby (born in1890 at Bottesford) and Lucy Caroline (born in1895 at Bottesford). Walter’s baptism record confirms that he was born on the 15th September 1887 and was baptised on the 30th October that year at Bottesford.

The 1891 census records that at “Whittles Farm”, Bottesford, lived James (aged 39), Elizabeth (also 39), and three children named Frederick (6), Lucy D. (8 months old) and Mary E. (aged 2, christened Marion Emily). Also at the farm on census night was John N. Dolby, a 29 year old “horse slaughterer” from Waltham-on-the-Wolds (most probably Elizabeth’s younger brother) together with a farm servant and domestic maid, but their second son, Walter James (b.1888), was absent. Their fifth child, Lucy Caroline, was born in 1895. Farmer James Whittle was also recorded in Bottesford in Kelly’s Directory of 1891 and again in 1899, but not in 1901. The identity of Whittles Farm is a little uncertain, but in the census it was recorded immediately before houses in The Nook (now Pinfold Lane), and may have been the farm at the end if this street which is now known as Rectory Farm. However, in about 1900 the family left Bottesford and moved to Nottingham. James died in Bulwell in 1930, Elizabeth in 1929.

Walter’s older brother, Frederick William Whittle, enlisted and fought as Private 20864 in the 2nd Battalion, Oxford and Bucks Light Infantry in the First World War. He was declared ‘Killed in Action’ on the 3rd June 1916, and is buried in the cemetery at Zouave Valley, Souchez, Vimy Ridge.

Corporal Walter Whittle, 16958, of the Northamptonshire Regiment, is recorded in the Forces War Records (FWR) website. Further information, given below, has been kindly provided by his neice’s husband, Mr G.M. Brassington, who notes that he is among the servicemen listed by David Woodall in the appendix to “THE MOBBS OWN – (the Battalion History) 1914-1918” published in 2000 by the Northamptonshire Regiment Association. The nominal roll as at 17th August 1915 printed there shows LCpl Whittle, W.J. in C Company.

Walter James Whittle enlisted on the 10th September 1914 at Peterborough Recruiting Office, and is seen standing on the left of the group of men in the photograph reproduced here. He was also photographed with his fellow soldiers at Horsham while preparing to depart for the fighting in France, and on the 7th November 1915 he sent home a postcard saying that he was “just off to the trenches for 4 days”. A photo of him was taken on the 4th December 1915, when he described himself as a “war worn hero”.

On the 29th December 1917 he married Beatrice Mary Granville in Exeter.

Jonathan D’Hooghe, of the Western Front Association, has kindly looked at the evidence presented here and provided the following comments:

The soldier is identified as a lance-corporal of the Northamptonshire Regiment, and the crossed flags on the sleeve of his tunic indicate that he was a signaller. His Medal Index Card indicates that he went to France on the 1st September 1915, and it seems probable that he was part of the 7th Battalion, which arrived in France on the 2nd September. The 7th was formed at Northampton in September 1914 as part of the K3, and came under command of the 73rd Brigade in the 24th Division. It moved to the South Downs and into billets in Southwick between November 1914 and April 1915.  It moved on to Woking in June 1915 and on the 2nd September landed at Boulogne. The 24th Division was one of the first Kitchener units to be blooded at Loos in late September 1915. With no training or time to adjust, they were thrown into the battle and suffered over 4000 casualties for no gain. Walter Whittle did well to survive the war and, as his card states, he was transferred to the Reserve on demobilisation – ‘Class Z’.

Having returned to England, Walter began work at the Southwell Diocesan Office in Nottingham, where he stayed until he retired on the 1st October 1952. In the electoral register of 1923, Walter and Beatrice were at 2, Edward Rd, West Bridgford. In the national register of 1939 he was recorded as a ‘law clerk’ born on the 15th September 1887, now living at Rancliffe Drive, Deldale Lane, Keyworth (in Bingham Rural District), with his wife Beatrice Mary, born on the 29th April 1892, and their son Peter, born on the 24th March 1923.

Walter Whittle served in the Home Guard during the Second World War, holding the rank of sergeant. He retired fro work in 1952, and sadly died on the 3rd May 1953, buried at Keyworth, Nottinghamshire, on the 6th May.