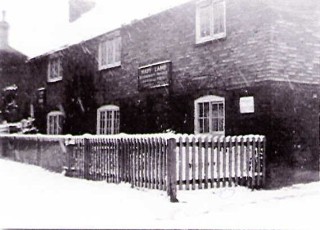 Winter scene showing the sign over the front door 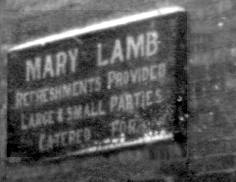 Mary, wife of William Lamb, ran the Six Bells a tea room, possibly in the 1920s 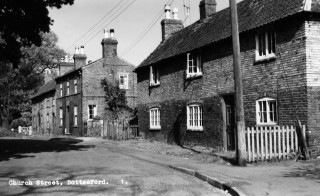 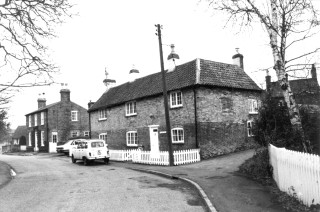 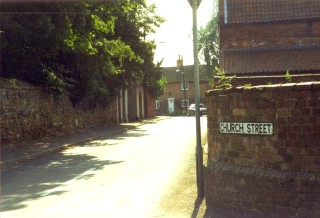 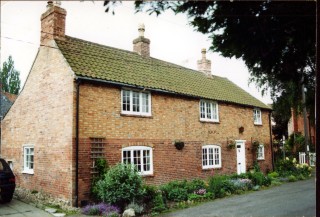 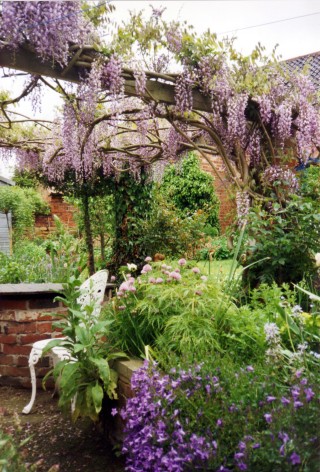 Well at the rear of Six bells 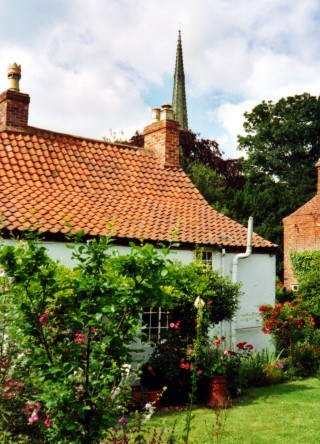 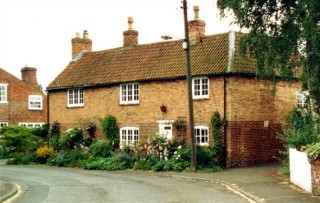 Bottesford has three public houses today, and there is another at Muston, but in the past there were a number of others including the former Six Bells alehouse, now No.4, Church Street. Records show that this was open during the 19th Century, and finally closed its door after the First World War.

Six Bells is one of the oldest houses in Bottesford. It is a Grade II Listed Building within the Bottesford Conservation Zone. The listing entry recognises that it dates from the 18th Century. The name is derived from its having been an alehouse close to the church. It displays evidence of several stages of development extending back into the 17th Century and perhaps earlier.

The house occupies a plot of land on the southern side of Church Street, at the junction with St Mary’s Lane. This is perhaps the oldest part of the village. Church Street gives access to St Mary’s Parish Church via Dr Fleming’s Bridge, and also forms the southern border of the grounds surrounding the Old Rectory.

Bottesford is a Domesday village, probably of Saxon origin. Dr Fleming’s bridge was built during the rectorship of Dr. Samuel Fleming in c.1618 alongside a ford by which the road crossed the River Devon. The road continued across the church yard and then up the slope northwards and then north-eastwards towards Allington.

Wyggeston Hospital
St Mary’s Lane is now a narrow snicket used only by pedestrians, and runs between Church Street and Grantham Road . It marks the western boundary of an area of land that used to belong to Wyggeston Hospital, and on which stand the Six Bells and the adjacent terraced row of cottages known as Wyggeston Cottages. Numbers 6 and 8 Church Street also stand on what was probably part of the Wyggeston land.

Thomas Wyggeston was a wealthy merchant of Leicester during the reign of Henry VII, who established first a chantry and then a hospital in Leicester around 1520, before the Reformation. The hospital survived both as an almshouse and as a school: there is a Wyggeston School in Liecester to this day although its medieval buildings on St Martin ‘s Square have gone. Presumably, income for these institutions was supported by the rents drawn from farms and other plots of land that were bought by Thomas Wyggeston for the purpose. Another example is Wyggeston Farm in Foston, and there were also other plots of land within Bottesford parish and elsewhere.

The land that Six Bells House occupies may have been a medieval small-holding or toft, with buildings on it during the early 18th Century and earlier. The land remained in the ownership of Wyggeston Hospital until 1945, when it was sold to Mr W J Roberts of Bottesford.

Three old cottages
There is abundant evidence to show that Six Bells once consisted of three separate cottages that became incorporated into the single house. This process also included raising of the height of the walls to enlarge the upper storey and the addition of a rear extension beneath a catslide roof. It is most likely that this took place in the mid to late 18th Century, leading up to its establishment as an alehouse. Before this, a narrow alleyway separated the house that now makes up the western part of the building (here designated Cottage 1) from two adjoining cottages that together formed the eastern part of the present building (Cottages 2 and 3). There is also some evidence that Cottage 1 extended further to the rear, into space where a single storey 19th Century extension now stands. This building was thus appreciably larger than either of the two adjoining cottages. However, the original rear extension appears to have been destroyed, perhaps by fire, though we have no records of this or exactly when it occurred.

The old well
Immediately behind the house is a well. This is some three feet in diameter and probably about 15 feet deep. It is lined in stone, in contrast to the house itself which is made of brick. The lining stone is the same orange-pink local building stone (the “Sandrock”) that is seen in the oldest masonry and walls around the village, for instance the fabric of the walls of the chancel of St Mary’s. It is reasonable to suppose that the well provided water for the three original cottages, and its stone lining suggests that it is considerably older than the Six Bells House we see today.

A mud wall
Inside Six Bells, one of the walls is unusually thick and of varying thickness. We think this is part of a mud wall that originally formed the rear external wall of Cottage 2, although it has not been tested to prove if this is correct.

Piecemeal development
We can speculate that two (rather than three) separate buildings originally stood on the site: one corresponding to Cottage 1 and the second in the space later occupied by the adjoined Cottages 2 and 3. Cottage 1 appears to have been timber framed building of two story height, perhaps a farm house. Some of the frame timbers survive embedded within the brick masonry flanking St Mary’s Lane and within the upstairs part of the gable. The other building had at least some mud walls, one of which has survived, and may also have had timber framing. It may have been a combination of cottage and byre, a single story structure with a steep thatched roof providing valuable additional loft space.

The two buildings were separated by an open alleyway no more than three feet wide that gave access to a yard at the rear. On the southern side of this yard stood additional building, possibly sheds or other cottages on the site of the present Wyggeston Cottage terrace. Water was supplied from the well, which stood in the yard.

The Six Bells ceased to be an alehouse in 1919 but was run by Mary Lamb  as a Tea Room some time after this. The 1901 census shows that it was occupied by 60 year old William Lamb, publican and joiner, his wife, Mary, (54), son Ernest (22), groom and waggoner and the Lamb’s twelve-year-old grandaughter, Ada Wade, later Mrs Bateson, wife of the blacksmith who worked the forge in what is now the Red Lion car park, and mother of Mrs. Ada Bond, who lived in the Six Bells until after the war.