You are here: Home>Places>Buildings and Houses>House History - Claremont, High Street 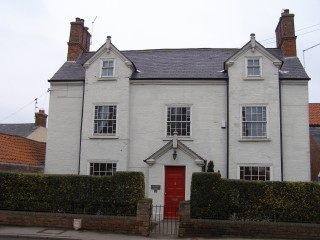 Claremont House, on High Street, next to The Thatch, is an imposing and intriguing building.

Its façade stands out amongst the flat, brick fronts of most older houses in the village. It has two, square projecting bays surmounted by gables and a matching central porch. Unusual, symmetrically placed sash windows give it an air of cool self-possession. The description for the Grade 11 listing is typically cursory, describing the house only from the outside, and dating it as late C18th. with an added  C19th porch.

Nick and Jill Pompa, who have been lovingly restoring Claremont since they moved in 5 years ago, know better. Part of the rear of the house is made up of an ironstone wall, suggesting that at least some of the house predates the switch from stone to brick in the C17th, while the deeds refer back to ‘ John Forest of Bottesford, gent.’ 1765. The curved ceiling of the hall clearly extends over the porch, proving that while the gable may be a C19th addition, the porch itself is part of the Georgian structure.

The most striking feature of the interior faces you when you enter. A splendid staircase with an elegant mahogany rail sweeps vertiginously up to the very top of the house. The walls of the stairwell are decorated with a classic Georgian stone-effect design. The landings, however, are uneven and eccentric. Jill suggests that the staircase was installed to make the house more impressive, but on a limited budget with minimal structural alterations.

This magnificent  staircase was not the only one. A photograph shows where the back stairs once came up through the lime-ash floor. These were probably demolished in the 1970s. Perhaps the servants bells, of which traces remain, were removed at the same time.

Many original features have survived, especially the fireplaces and surrounds in several rooms, the six-panel Georgian doors and most of all the elegant sash windows, which appeared in Bottesford surprisingly soon after they were first introduced in London in 1710, because of the village’s proximity to the Great North Road.

Outside the house once had a range of brick floored outbuildings, a stable and carriage house, now part of The Thatch and gardens with a well, fruit trees and a greenhouse. At one time it belonged to the Wright family, doctors in Bottesford since the 1820s, when they owned Dyer’s Cottage and Wright’s (later Redford) Yard.. Wrights can be traced back in Bottesford to the early C17th. In C20th Claremont House came down in the world. In the 1970s it belonged to Belvoir Turkey Farms, but now, with its new owners, it has regained its old character and charm.