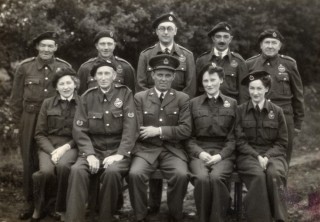 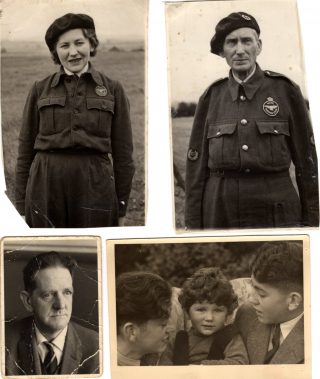 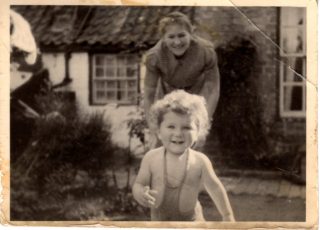 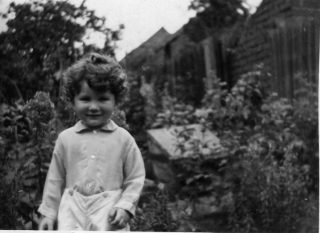 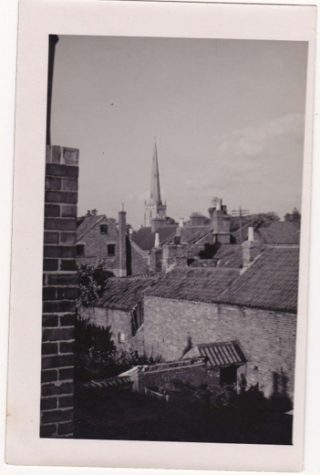 As I recall it, Bottesford did have all we needed, too,  but as I was born there, I didn’t know what to miss!  I think we went to the hospital in Nottingham once because I had asthma, and to Grantham a few times for shopping of some sort.  I believe that there was a  café there called Catlin’s ?  I think my mum said that it had suffered from the bombing.

Perhaps I should list the dramatis personae – my family!

My (now late) father was Alec Doncaster.  He served during the second world war in Africa as a Captain in the Pay Corps of the 8th Army, Sherwood Rangers.  After the war he was a cashier in the National Provincial Bank in Grantham, and once a week on Wednesday he opened up the little High Street branch in Bottesford.  It was along the High Street on the same side of the road as Field View.  I’ve just had a quick look at street view, and it appears now to be a unisex salon, although it doesn’t take much imagination to see that it was once a bank!  I don’t remember the house between Field View and the salon.  In my memory that land was all a walled allotment which we used.  Maybe I have it wrong, but I don’t think so, although it was 60 years ago!

My (now late) mother was Edith Doncaster.  She served in the Observer Corps with her father, Charles Green.  My grandparents, Charles and Lizzy Green also lived with us at Field View.  Their room was on the right as you go in the front door, and their bedroom was  on the left at the top of the first 2 flights of stairs.  We used to go for blackberrying walks up to the observer post, which was at the top of the hill along a track to the left of the railway station.

At Field View, the room on the left as you go in the front door was for posh occasions, like Christmas!

The last two members of my family at Field View were my two brothers Mick and Tony who were 14 and 15 when I was born.  They are Philip John (Mick) Doncaster, who now lives in Mickleover, and Robert Anthony (Tony) Doncaster, who died earlier this year.

I notice that you refer to the house as Number 8.  There was no mention of a number when I lived there, and it has always been referred to as Field View.

My parents originally lived in The Grove, Grantham, near Dysart Road.  I don’t know when they moved to Beckingthorpe House, but I assume that it was immediately after the war.  Although I was born there, my earliest memories are of Field View. In those days mothers used to put babies out in their prams in the garden in all weathers.  I can actually remember lying in my pram listening to the sparrows and starlings chirping in the roof of the cow byre, which I suppose is no longer there.  Even today, the sound of sparrows transports me back.

I remember that two flights further up from the 2 bedrooms were the two attic rooms.  On the left we had some old army camp beds which were laden with apples and pears from the trees in the garden, and from Mrs Willock’s orchard next door, of which we had free run.  Brother Mick’s photographic dark room was in there, too, and he was guided in his photographic interest by Tom Allsop, who, I believe, lived out towards Easthorpe.

On the right was “the boys’ room” where my two brothers slept.

Regarding the photos of me, I am sure that if you drew a goatee and moustache on and cut the hair a bit you would recognise me straight away!  On the right in the picture of Mother and me, the large window is what we called the kitchen, or parlour.  It had a range with a back boiler, an oven,  a filler for the hot water, and a tap in the hearth.  In the corner of the room was a flight of 3 steps down into the pantry.  In the pantry, on the right as you go in, were two brick piers supporting an oak trough, where we would have a pig cut up each year.

On the left of the picture, set back, is window and back door into the scullery.  Inside the back door on the left was a stone sink, with a hand pump drawing water from the well.  This was the only water supply.  Next to the sink, in the corner, was “the copper”.  This was a brick structure holding a large, black container for boiling the wash.  Underneath was a fire place for that purpose.  The wash was then agitated with dolly legs in a tub, and the water squeezed out with the Acme hand turned mangle.

There was no sewerage other than surface water soakaways, and the lavatory was the proverbial brick outhouse half way down the garden next to the pig sty just level with the apple tree.

I am amazed that I can remember all this, but it is as clear as a bell in my mind, and now seems incredibly primitive!

We moved to Grimsby in 1954 as Father was posted by the Bank.  My brothers were doing their National Service by then, so apart from leave they didn’t see much more of dear old Field View and the Rutland!

One thing on the website that mystifies me is the following:  “The Victory Commemoration Hall building and the land it stands on was purchased by three gentlemen – Leonard Barnes, Albert Palmer and Alec Doncaster for £99 from the Marsh family in 1954.”

We have no knowledge of this, and it is especially odd as we left the village that year.