You are here: Home>Places>Buildings and Houses>No.4 Queen Street, formerly 'The Marquis of Granby'

No.4 Queen Street, formerly 'The Marquis of Granby' 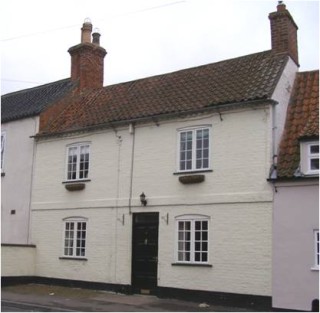 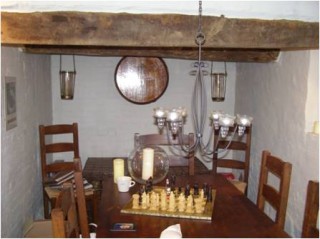 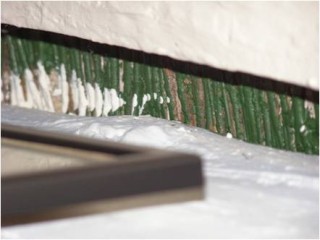 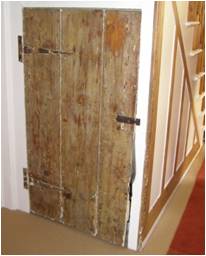 An old door made of three broad planks. 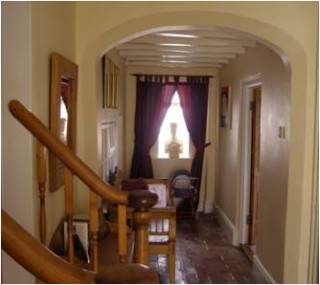 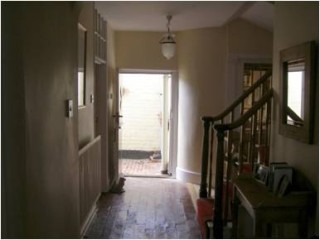 Brick flooring inside and out. 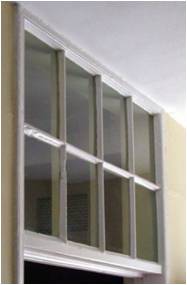 Fanlight above an internal doorway. 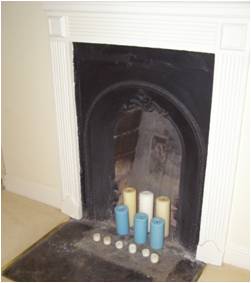 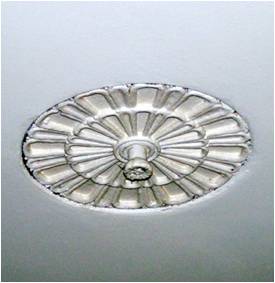 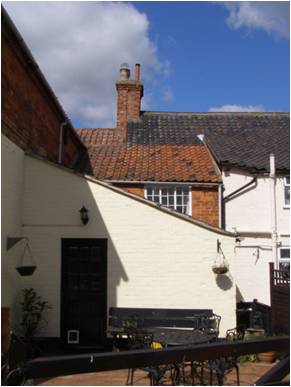 Rear of buildings showing no.4 on left and no.6 to the right with blue pantiles. 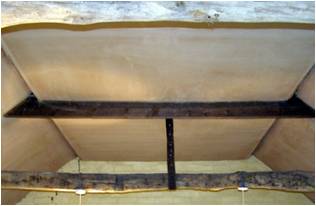 Roof beams in the stables at the rear of no.4. 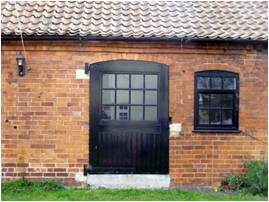 Door and window in stable at rear of no.4.

We are indebted to Mrs Sam Fells for generously allowing us to look round inside this fascinating house, which has played an important part in the life of the old village.

The Marquis of Granby has a pleasingly symmetrical, unpretentious exterior, very much like other dwellings and farmhouses in this area. There is a central door and flanking casement windows. The upper and lower storeys are marked by a ‘platband’, a row of projecting bricks, and there is a dentil eaves cornice peeping out from below the pantiled roof. The small space immediately in front of the house is covered in bricks. An old photograph shows that this may have been part of the original pavement, predating the present day pavement and curbstones.

In the early 1970s The Marquis of Granby, or the Granby and Railway as it was later known, stood empty, its door hanging from the hinges. The building was condemned. Fortunately it escaped demolition and was listed as a building of special architectural and historic interest.

Sam Fells, its current owner, told us that it was built in 1734. We do not know exactly when it became an inn, but can guess that it was during the career of the renowned Marquis of Granby, son of the Third Duke of Rutland, who is reputed to have helped retiring officers that had served under him to set up public houses which duly came to be called the Marquis of Granby.

The Dictionary of National Biography gives an excellent brief biography of the Marquess of Granby. He was John Manners (1721-1770), the eldest son of the Third Duke of Rutland, and father of the fourth duke, Charles Manners. Always a man of action, first known for his hunting, gambling and drinking, he rose to be a distinguished soldier. He fought in the ’45’ and then continued to serve in the army. He married in 1750, was elected MP for Cambridgeshire in 1754, and was appointed colonel of the Royal Horse Guards (The Blues) in 1758. He then rose to the highest rank during the Seven Years War (1758-1765), where he was a highly successful cavalry commander, becoming Commander-in-Chief of the British contingent. After this he had a parliamentary career, during which he was appointed Commander-in-Chief of the army during Pitt the Elder’s government, but which ended in 1770 after he became embroiled in the Wilkes Affair. He died later that year and was buried at Bottesford on the 28th October. Much of his lasting popularity derived from his well-publicized solicitude for his men. The large number of public houses called the Marquess (or Marquis) of Granby is testimony to the lasting gratitude felt towards him by the disabled non-commissioned officers whom he is believed to have set up as publicans.

By the time of the first national census in 1841, the landlord was David Hoe, aged 60, who ran it with his wife Mary, James (20) and Ellen (19), presumably his children, and one servant, 17 year-old Sarah Reynolds. The census for 1851 records that the publican was then Robert Marriott (36), with his wife Ann (33), five daughters and one son (ages from 10 to 1), together with one servant (19) and three middle-aged male lodgers. He was still recorded in the 1855 Post Office Directory of Leicestershire, but the Commercial Directory of Leicestershire for 1861 records that Samuel Hall was by then proprietor of the Granby, while White’s Directory for 1862 records the proprietor as Joseph Johnson.

Kelly’s Directory for 1876 states that the landlord was Thomas Redford (or Retford). White’s Directory for 1888 and Kelly’s for 1891 and 1895 all record Mrs Ann George as landlady of the Marquis of Granby. However, the census for 1901 indicates that the inhabitants of No.4 Queen St were Thomas Retford, a “retired innkeeper” aged 84, and his housekeeper Elizabeth Jackson (60). Kelly’s for 1912 and for 1916 both record that Harry Smith was proprietor of the pub, now called the Granby and Railway. It continued to function as an inn until 1921, when its license was revoked.

A will of 1897 indicates that the property actually belonged to John Hoe at this time, and was left to be administered by trustees. He appointed J.Challands and Frank Norris as joint executors and trustees and joint inheritors. John Hoe died 23/11/1897. The property in question consisted of what are now Nos.2, 4 and 6 Queen St, then under single ownership. The will refers to:

All that messuage or dwellinghouse with the yard and outbuildings thereto adjoining and belonging situate and being in Queen Street in Bottesford aforesaid bounded on the N by property then belonging to His Grace the Duke of Rutland on the S by the messuage or public house then next therein described on the E by the property then belonging to George Goodson and on the W by Queen Street aforesaid as the same was then in the occupation of Elizabeth Lane at an annual rent of £14.0.0. [this is No.6 Queen St]

All that messuage or Inn or Public House with the yard and outbuildings thereto adjoining and belonging and situate in Queen Street in Bottesford aforesaid then formerly known as the “Marquis of Granby Inn” but then called or known as “The Granby and Railway Inn” bounded on the N by the mentioned messuage or dwellinghouse and hereditements on the S by the hereditements next therein described on the E by the property then owned by George Goodson and on the W by Queen Street aforesaid as the same was then in the occupation of Hensons Ltd their under-tenants or assigns at an annual rent of £35. [this is No.4 Queen St]

All those two messuages or tenements with the yards and outbuildings thereto adjoining and belonging situate and being in Queen Street in Bottesford aforesaid bounded on the N by the last mentioned Inn or Public House on the S by the property then belonging to Marriott on the E by the property then of the said George Goodson and on the W by Queen Street aforesaid as the same was then in the respective occupations of Thomas Jennings and Mary Norris at the respective weekly rent of 1/- and 9d and 1/- and 7d. [No.2 Queen St]

The arrangement was that when one of the trustees died, the remaining one appointed another so that there were always two. For instance, J. Challands died in 1911, after which Frank Norris appointed RJ Kettleborrow in his place. Further changes took place over the years, and it was not until the 1980s that the houses were sold by the last trustees as the separate properties they are today.

The late John Sutton, recalling his memories of the late 1890s (private papers of Dorothy Beedham, reproduced in The Book of Bottesford, p.93), described the annual meeting of the Bottesford Friendly Society taking place in the yard of the Granby on the Friday after the Whitsuntide bank holiday. It may also have been the place where the Cow Club, another village mutual-help society, met.

From the outside it could be a simple two-up, two-down cottage, but once you step inside, a fascinating architectural jigsaw is revealed. To the right and left of the front door are the two rooms you might expect from the outside of the house. To the right is the breakfast area, which now opens into the kitchen beyond and has exposed beams, in one case supported by a cast iron brace. To the left is a sitting room where the fireplace shows the small C.18th bricks of which the house is built, bowing slightly under the weight of years. After this, the Marquis of Granby begins to exhibit Tardis-like qualities. The entrance hall becomes wider and on your right is a large window, like a shop window, opening on to the kitchen with its gleaming old quarry tile floor. The owners of the house believe this must have been a serving hatch from the tap room in the days when the house was still an inn. There is an even bigger surprise to the left, however, where a short flight of stairs leads down to a dining room created out of the inn’s shallow cellar, which extends underneath the house next door. Substantial beams of considerable age support the ceiling, which is made of rush and lime-plaster.

Another feature which reflects the re-use of materials even older than the house itself is the door to the cupboard under the stairs, which is constructed of broad planks and fitted with old iron work. Beyond this is further transformation. Another, wider  hall opens out, running at right-angles to the passage from the front door. To the left is the foot of the staircase and beyond that an archway framing a window, to the right the wall curves to a door into the yard. The whole is 24 ft long and floored with beautiful, glowing C.18th bricks. The floor bricks match those in the yard suggesting that this was originally all outside. In 1820 an extension was built at the back of the 1734 house and the two were linked by the passage downstairs and by a bridging staircase upstairs. The early C.18th cottage proportions and features of the front half of the house give way to the grander style of the Regency.
Facing the passage from the front door is another door with a fanlight like that on an exterior door The room beyond is much larger than any in the older part of the house, with an arched fireplace flanked by windows in the gable end.

A wide staircase with Regency newel posts and banisters leads to the upper floor. At the top of the stairs, high up in the wall are two tiny doors leading to the attic space. There are two bedrooms at the front of the house and a third bedroom with a sloping ceiling and a Yorkshire sash window over the cellar. Then a broad shallow flight of steps acts as a bridge to the 24-foot long room at the rear of the house, which once served as the inn’s function room. Here a Georgian fire surround has survived, next to it a window opening on to the blossoming pear tree. There is also a curious feature in the ceiling, a rose, much smaller than usual, which seems to have been designed to support some form of lighting, perhaps a small gas chandelier.

The bathroom is a fairly recent addition. The room was formerly used as a workshop by an amateur radio enthusiast, who was in the habit of burying unwanted radio parts under the pear tree.

Outside, at the rear of the house, it is possible to see the complicated intersecting roofs of the Granby and the adjacent buildings, surmounted by a handsome, slightly drunken chimney. The Granby has another surprise in store, stables now converted into a garage and a barn 22 feet long, complete with brick floor, an arched platform for feeding troughs and beams made simply from tree trunks with the bark stripped off.