You are here: Home>Topics>Events and Celebrations>Bottesford Fetes and Field days in 1947

Bottesford Fetes and Field days in 1947

From the Grantham Journal Archive 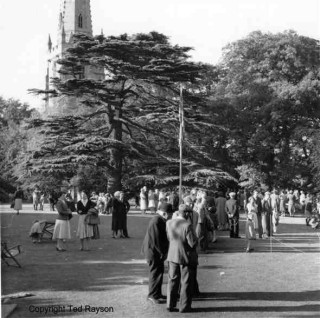 The following details are taken from columns and advertisements in the Grantham Journal during July and August 1947.

The attractions were to be as follows:

“Neville Turner playing his organ from 3 p.m. to 6.p.m. The Baby Show at 3.30 with judging of 3 age groups. Stalls to include books, grocery, fancy goods, produce, bring and buy, miscellaneous and rummage stall. Competitions to be darts, hoopla, clock golf, bran tub, spinning jenny, treasure hunt, duck quoits, skittling for a pig and slashing the cockerel” (not sure what that entailed, exactly!!!)

Teas, ices and refreshments on sale but the big attraction was to be a miniature railway from Nottingham.

There were contingency plans in case of wet weather, with stalls in the school and the competitions, games music and refreshments in the new Village Hall.

Events for the evening included a special whist drive at the school at 7.p.m. and at 8.15 p.m. a dance in the village hall to the music of Eric Need and his Music, tickets costing 2/-.

Catering was provided by the Rutland Café.

The following week, the Grantham Journal reported that the event had been a resounding success, raising £242/4s. Canon Blackmore ‘said that the first £50 would go to the Diocesan Fund and the rest would be used for repairs to the north transept of the church and the establishing of a Lady Chapel in the south transept. The Duchess of Rutland opened the Fete and was presented with a bouquet by Mary Topps and the outstanding attraction was the miniature railway.”

On July 19th, the Methodist Chapel held a ‘Field day’ on the Village Hall Field. There were a variety of stalls and the competitions included a baby show, fancy dress, a beauty queen contest and sports for children. At 7.45 there was a grand concert in the V.C. Hall with entertainment by the Gedling Colliery Male Voice Choir. The fete raised £100.

A Garden Fete was also held at Glebe House, Muston on July 26th, in aid of the Diocesan Appeal, Church funds and school funds. The fete was opened by Mrs. C.H.F. Ransom and entry was 6d for adults and 3d for children. Attractions included fancy dress for under 16’s, a baby show and children’s sports. There were stalls and competitions including hoopla, skittles and a treasure hunt. Music, for the afternoon, was provided by the Grantham Salvation Army Band.

If anybody has any photographs of these, or similar events, please do get in contact.