You are here: Home>Topics>Events and Celebrations>May Day and other celebrations

May Day and other celebrations 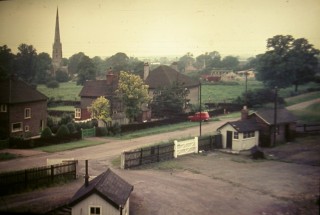 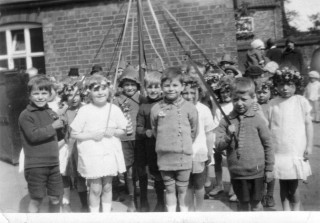 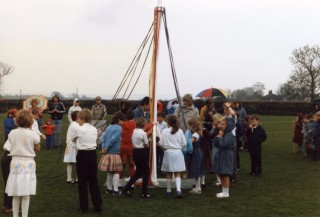 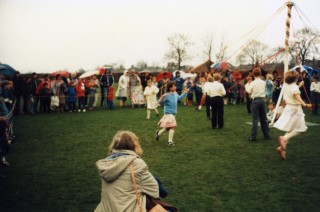 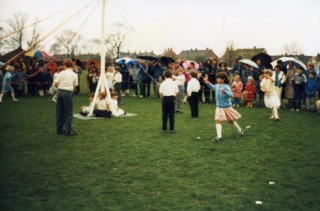 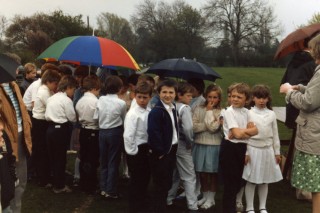 Gathering for May Pole, or maybe rain dancing in 1986 - Bottesford Primary School 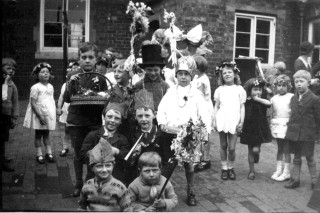 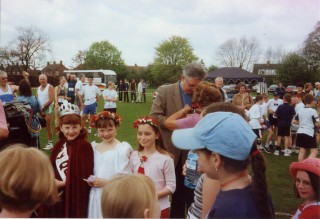 May Queen (Sarah Taylor) and attendents in about 2002 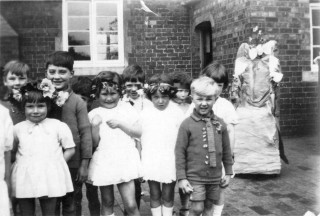 May Day Pageant in the 1920/30's at Bottesford School (Back Row Left to Right George Waudby, William (Jabbers) Jackson) 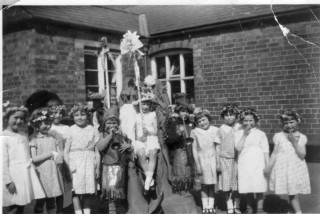 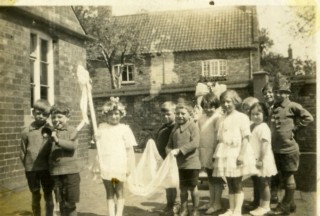 May Day procession in the 1920/30's - Mrs Ada Bond recalls that the May Queen was Eva Randall; others in the procession include George Taylor, Ralph Bateson, Joan Tuckwood (Mrs Joan Roberts), Betty Waudby and Bill Waudby 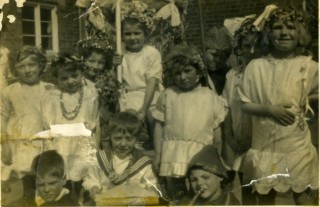 May Day and other Celebrations.

By tradition, May Day, May 1st or Garland Day is a day set aside for celebrating the spring. It marked the start of summer for the ancient Celts.

There are various explanations of the origins of Maypole dancing and its associations with fertility and annual renewal. However, the Maypole used now, with plaiting ribbons, is a 19th century tradition from southern Europe. So is the practice of crowning a child May Queen. Traditionally, however, village maidens would dance around the Maypole. The prettiest would be chosen as May Queen and crowned with a crown of hawthorn blossoms. The May Queen is thought to have represented Flora, the Roman goddess of spring.

The details below are drawn from Mrs. Ada Bond’s reminiscences of May Days celebrated when she was a child in the 1920’s and 1930’s. Mrs. Wendy Cross (nee Topps) also remembers May-garlanding as a celebration of May Day. When this particular tradition disappeared in Bottesford is uncertain.

In Bottesford, there was a variation of garlanding. On May Day, the girls would dress in their best dresses and decorate a clothes basket with wild flowers and garlands. The girls would dress up their dollies, put them in the basket and then cover the basket with net curtain. With friends, they would go to houses in the village, knock on the door and ask if the house-holder would like to pay a penny and lift the net, to look at the dolls. Keeping the penny was a good way of earning pocket money.

This tradition may have continued through the war years. Certainly Wendy Cross remembers decorating  the clothes basket, dressing the dolls and going around the village with Brenda Sellars. In 1948/1949, the pennies were being donated to Dr. Barnardo’s which seems to have been the charity adopted by the school.

There are a variety of photographs of May Day celebrations at the school. The celebrations seem to have been part of school life in the infant school during the 1920’s and 1930’s. All those children had a part in the May Pageant. However, from 1901 until 1948, May Day celebrations are not mentioned in the School Log Book. The junior and senior departments do not appear to have celebrated May 1st although they gave an exhibition of Maypole dancing in the yard before the Whitsun holidays on June 2nd 1922 and on Empire Day in May 1923. By 1948, folk dancing lessons were taking place at the V.C. Hall.

In the 1970’s and 1980’s, the tradition of choosing a May Queen passed to Belvoir High School and more recently, back to the Primary School.

A circus visited the village every year and put up their attractions on Palmer’s Field (the field to the north east of the Church). This was perhaps a long-standing event. For example, 100 years ago, in the Grantham Journal feature ‘Memory Lane’ records that Scott’s Circus gave performances in Mr. Daybell’s field. The chief attraction was ‘a display representing the deeds of Dick Turpin’.

It has also been remembered that the circus of Bertram Mills came to the village. Can anyone remember this event?

The school log book kept by Mr. Collett refers to Bottesford Feast Monday which seems to have been the first or second Monday in October. The school was always closed on this Monday and this one-day holiday occurred in the years from 1901 to 1914. Throughout the First World War (1915-1918) the Bottesford Feast is not mentioned. We can imagine how as the realities of war made their impact within Bottesford such celebrations would not have been a priority. However The Feast is noted as taking place once more in the post war period in 1919 and 1920. After Mr. Collett left the school and during the headships of Mr. Lockley and Mr. Cox, there is no mention of the Feasts.

In “The Book of Bottesford” the Feasts are mentioned. Michael Honeybone notes that at the time of the Bottesford Feasts – the week after the Whitsunday bank holiday – a fair was held on Daybell’s field (behind what is now the VC Hall). The feast celebrations lasted for several days and as well as the fair, games including football and cricket were played as part of the celebrations.

Mrs Ada Bond recalls that on Shrove Tuesday, the tenor bell was rung at St Mary’s Church. She understood that the bell was bought for the church by the Staunton family whose ancestors have occupied the nearby Staunton Hall since Saxon times. Up to about 1860 it had become the custom for that family to supply an annual replacement of the rope for the tenor bell. Traditionally the Staunton family could be called upon to guard Belvoir Castle. The ringing of the tenor bell at St Mary’s (situated half way between their Hall and Belvoir castle) was their call to arms. For school children in the late 19th and early 20th century it signalled a half-day holiday from school. Mrs.  Bond remembers that the children would spend the afternoon playing games such as whip and top, playing marbles, swopping cigarette cards and skimming these cards to cover one and win it. Of course, the main aim of Pancake Day was to eat as many pancakes as you could and then boast about it!