You are here: Home>Places>Schools>Bottesford Playgroup 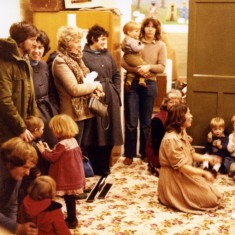 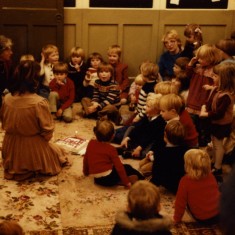 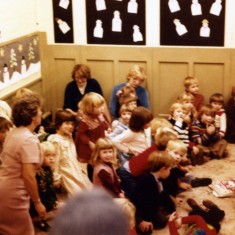 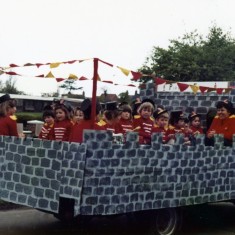 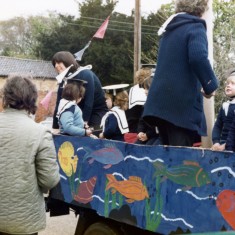 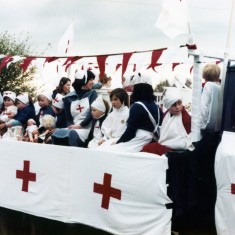 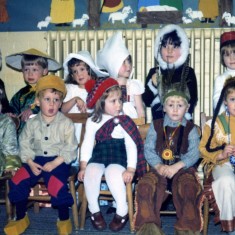 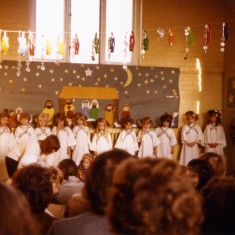 Started in 1966, Bottesford Playgroup moved to new premises in 1988. These were built as the result of community effort. Jill Bagnall, one of the people closely associated with the Playgroup, continued her family’s  tradition of celebrating such events in verse.

We currently have no photographs recording the construction and opening of the new building on the Belvoir High School site, nor of all the people mentioned in the verses below. The photographs on this page were taken at events in the early 1980’s when the Playgroup occupied the Old Primary School. Please do let us know if you have photographs we could add to this page.

The idea to start a Playgroup at Bottesford came from a lady – Jane Watt was her name.
She organised some meetings and those who were interested came.
Pat Pearson, Floss Pritchett, Kathy Fisher, Denise Morton, Gill Silverwood,
Esther Sheardown and Liz Bradshaw, things were looking good.
But now what was needed was a Playgroup Leader, Kathy Fisher said she knew someone who might,
That someone was Irene Pacey, as it happens it proved just right.
Irene was approached, and she willingly accepted the job,
The wages were 7/6 for an assistant and for a leader it was just ten bob.

Fund raising was started, for some cash was needed in haste,
Books, toys, games, puzzles were collected, there was no time to waste.
Then in April 1966 Bottesford Playgroup opened, using the V.C.Hall
Working with Irene was Nanny Bradshaw opening two sessions a week I recall.

During the next few months more sessions were needed and still playgroup was going strong
More help was urgently needed, Pat Pearson and then Joy Simpson came along.
Over the next ten years, Playgroup flourished, it took on some more staff,
There was only one drawback, now we can look back on it and laugh.
Every time the Hall was booked by another organisation we had to pack
All the equipment away in a small garage round the back!

In 1977 the V.C.Hall closed for alterations and a new extension,
So we moved into the Old Primary School, to stay for three months was our intention.
First we used the old infants room, and oh what bliss,
Not having to pack the equipment away, Yes, we liked this!
Later we occupied the next two rooms, we were happy there , have no fears,
So happy that the temporary three months turned into eleven years!

It has always been our dream and that one day it might come true,
To have our own Playgroup building, somewhere purpose built, clean and new.
Then along came Mick Booth, who put us on the right track,
He convinced us we could do it, from then there was no turning back.
Then good fortune smiled on us in the shape of Mr. Reed,
Who told us we could use some land at Belvoir High School, should we have the need.

Work started on our Building about 18 months ago,
We’ve had our ups and downs and sometimes progress seemed a little slow,
Bur we’ve kept plodding on, working when and if we could,
And in the end we’ve done it, now its looking good.

We’ve had a varied workforce, retired gentlemen, some mums and dads,
Staff, Committee members, whole families, friends and some teenage lads.
Some have spent so much time up here its become a second home, of course,
I’m sure some spouses here tonight may even have grounds for divorce,

With her husband as site foreman, Jean has taken the role of Clerk of the Works,
And unbeknown to him, she’s offered the workmen some very unusual perks!
A special thanks to you all, for turning up time and time again,
Thanks to the tradesmen, we have a building to be proud of, your efforts have not been in vain.

Through the years at Playgroup and this self-help project too,
There has been just one lady, who organises everything we do,
Without her Bottesford Playgroup would not be where it is today,
The building is a tribute to her in every way.
For 22 years of dedication, we feel it is a just reward
So put your hands together and with me applaud:- Irene Pacey.