Entries from the School Logbook 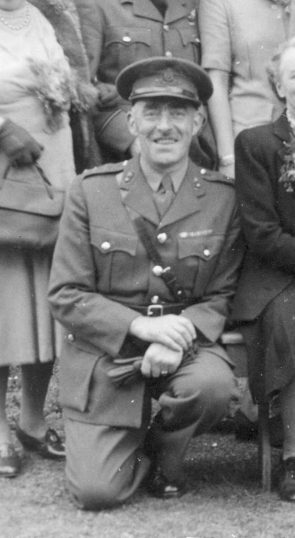 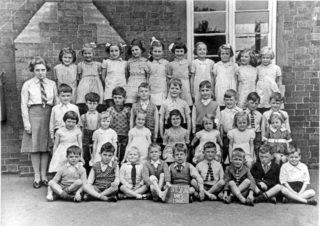 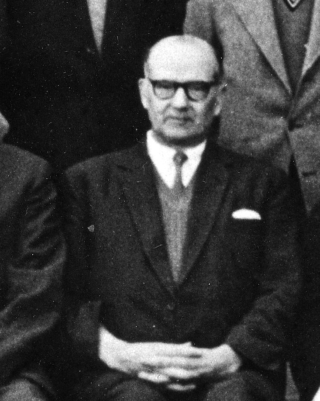 Mr Stimpson in the late 1950s, shortly before he retired.
Bottesford Local Hisory Archive - from the collection of Mrs Wendy Cross

The Bottesford School Logbook entries between 1939 – 1945 provide a fascinating insight into how both the school and the community coped during the 2nd World War.

We are most grateful to Bottesford Primary school for allowing access to the Logbook.

Mr. W. Cox was Head Teacher at the school when war was declared on September 3rd 1939. When he was recalled to active service in September 1940 Mr. Percival Stimpson (Senior Assistant) took over as Acting Headteacher on September 16th 1940.

Captain Cox returned to the school as Headteacher in March 1945.

Mr. Cox made an entry in the school log book for September 11th 1939. It states that there were “42 admissions and that these included 12 voluntary evacuees from London, Nottingham, Manchester etc., owing to the state of war between England and Germany since Sept. 3rd.”

In addition “(a) school for evacuated children from Sheffield has been set up in the schoolroom of the Primitive Methodist Chapel on the Green. The numbers are approx. 44 taught by own (Wybourn) school staff.”

On September 12th the roll rose to 221 as 5 more voluntary evacuees were admitted to the school.

However, the logistics of teaching the children in the schoolroom and the Chapel must have proved too much because by January 28th 1940 only 22 Sheffield scholars remained in the area and they were put on roll at the school.

The first winter of the war must have been a trial for all. The weather was dreadful with so much snow that the school buses could not get through from the surrounding villages. There was also a lot of illness – epidemics of Scarlet Fever, Chickenpox, Influenza, German Measles and the common cold which continued well into the spring. There was one case of meningitis which was unfortunately fatal.

Mr. J. G. Bullock was a Horticultural Instructor and he paid the first of many visits on October 20th 1939 to make sure that the school was doing its bit towards food production. More ground was to be dug up and on June 7th 1940, Miss Sack visited the school in connection with a meeting and cookery demonstrations concerning the food campaign. By July 19th, the ploughing up of the school field had commenced.

By June 17th, instructors of handicraft were required on war work so lessons stopped.

During the summer, school closed to allow pupils to assist with the harvesting of hay, corn harvest and the potatoes.

By July 9th 1940, there was provision being made for a bomb shelter in case of air raids without warning. This was fortunate because on August 14th 1940, it was noted that “Four bombs were dropped by German aircraft last night (10:21pm) in the field next to the playing field beyond the railway. Damaged the window and woodwork of the school Garden Hut. One unexploded bomb found by Hd.Master in School Playing Field-Reported to Police & Military Authorities, also L.E.A.”

The school roll in September 1940 was 189 plus 14 evacuees. Work on the air raid shelter in the boys playground had commenced during the summer holidays and was due for completion within a week.

The following are transcriptions of School Log book entries up to 1945 that make direct reference to the war effort at the school.

Sept. 13th  Mr. W. Cox was re-called for service with the army and Mr. Percival Stimpson took over duty as acting Headmaster.

Oct. 8th  Stirrup pumps arrived at school at the start of October in case of fires which might be caused by incendiary bombs.

Oct. 25th  Mr H. Picken (Agriculture and Education Department) enquired about the yield of potatoes on the “War plot” school garden and the produce from the garden.

Oct 29th The delivery day for 63yds x1yd of window netting and the installation of an electric light(12v car battery) in the shelter.

Nov. 7th  The dining hall on Queen Street was requisitioned as a rest room for the local A.R.P. First Aid Workers.

Nov. 11th  New War Savings groups were formed as a result of a visit by a commissioner for War Savings.

Nov. 19th  (A.R.P. Commandant) visited re. the blacking out of the dining hall and the installation of a new store.

Nov. 29th  The stirrup pumps were used in fire drill  and all were instructed in their use. The drill would happen weekly.

Mar. 19th  This was War Weapons Week and a Cinema Van gave a display in Church Street.

During this week, the School War Savings Group saved £440.5s.

May 9th  No Plungar children arrived because there were delayed action bombs in the vicinity of both roads between Plungar and Barkestone.

July 21st, 22nd and 23rd  6 men came to fit black-out blinds to all windows and the dining hall. Lessons were suspended when necessary or taken outside and extra gardening classes were taken.

Sept. 1st  As well as the school dentist examining all children’s teeth at the Coffee House and from the 2nd-9th giving treatment, the Head teacher and the gardening classes spent time at the school garden lifting early potatoes, storing and removing produce to the dining hall kitchen.

We can see from the following entry that the strains of running the school economy during the war were clearly showing by 1942.

Jan. 13th  “The Rev. F. Walford visited re. Economy in use of electric light. Bill for 1941 was £15 as compared with £3 in 1940. I pointed out that this year the school had been “blacked out” and the caretaker has been able to clean school and light fires in time to get the school warmed before 9.30.a.m.This was not possible in 1940, but the summertime was not in force through out the winter of 1939+ January 1940. Consequently the light was not required in the morning. At present, and in January 1941, lights are required in the morning owing to the summertime being in force. Scholars require the light in most rooms practically all day except when the sun shines (i.e. in the winter months) It is impossible to read writing on the board from the back of the IIIa and IIIb rooms, as well as IIa room without the electric light, except on very bright days. In IIIc room it is very dark at the back of the room.

I invited the Rector to view the classrooms and judge for himself, as it was a dull day, but he declined”.

Mar. 3rd  Mr. Stuart Smith visited and talked to the children about “Warship Week” which was to commence on March 7th until March 14th. A cinema van came to Bottesford and Mr. E. Thomas addressed the children.

Mar. 24th  Acknowledgement of £6.12s. paid to H.M. Treasury by Derek Holt Class IIIc who collected this amount during “Warship Week” by exhibiting his model destroyer.

School savings reached £3005, with £932 being saves during Warship Week.

April 14th  Mr. Tims visited in connection with a new scheme for the employment of children on farms during term time.

May 1st  The school collected 8cwts of waste paper in 2 days and had to stop because of lack of a suitable dump.

April 9th  Mr. Stuart Smith and Mr. Stevenson visited and addressed the school re. “Wings for Victory” week May 8-15.

May 10th  Wings for Victory week opened and R.A.F officers visited the school at 2.30.p.m. and demonstrated the use of a rubber dinghy to the whole school.

May 13th  Parents attended a display of maypole dancing and War savings stamps to the value of £9. 11s. were sold.

May 24th  Empire Day was celebrated.

July 4th  Mr. Stuart Smith presented a Certificate of Honour in recognition of effort made during “Wings for Victory” Week.

July 14th  News of the death of Miss E. James, secretary of School Savings Group since 1916.

Oct. 28th  The Cinema Van visited (National War Savings) and the show was witnessed by the whole school.

May 18th  Ascension Day, May Day Celebrations and two plays in the afternoon in connection with War Savings Week.(Salute the Soldier)

June 6th  Received acknowledgement of gift of £32 toward the purchase of Medical Supplies for the Leics. Regt. This sum being a gift from Bottesford School.

July 25th  After school today, children gave a display of folk dancing on Rectory Lawn, to 300 people in aid of Prisoners of War Parcels Fund. £53 was realised from the effort, which also included sales and amusements organised by the scholars.

July 27th  No. of books collected since the salvage Drive started:-7337.