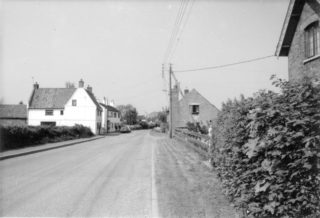 Normanton in the 1980s, looking along the main street.
Photo by Michael Honeybone, Bottesford Archive 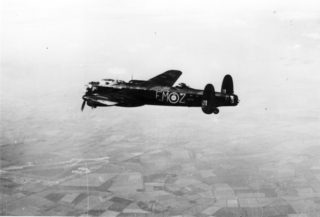 A Lancaster bomber in the air.
Bottesford Archive

This poem was contributed by Mrs Sheila Murphy, who found it in an envelope included with the papers of her late father, Mr Peter Hennessey. On the outside of the envelope is written, “Full copy of Ernest Robinson’s poem about Normanton in WW2”. In the envelope arethree A4 pages with the poem typed on them, plus an additional page with Ernest’s signature and address.

We are grateful to Mrs Murphy for passing the manuscript to the Bottesford Archive.

Now here is a little story
Or shall we say a rhyme,
It’s about a little hamlet
That has been here for some time.

Its records date back centuries
As here I will try to tell,
It may have been here in Saxon
Or the Norman times as well.

It’s been a lifelong home for me
And now aged seventy one,
It’s a little hamlet I am proud of
Known as little Normanton

It has its little landmarks
One is the Three Shires Bush,
With branches in three counties
A home for many a thrush.

It has its little coverts
Where foxes go to ground,
Where many noble men have hunt
Beside the Belvoir hound.

It’s known for ghostly stories
We hear from time to time,
That could give the coldest shivers
Down anybody’s spine.

A rustle in the hedgerows
The whining in the trees,
Brought out fear of Moses
Or jelly to your knees.

An aerodrome was built there
With many stories one can tell,
There were billets there for airmen
Near to Thackson’s Well.

The WAFFs we knew were jolly
I well remember still,
They had their sleeping quarters
On little Folly Hill.

The Lancaster bombers based there
Upon this very drome,
Were sent on bombing missions
To Germany or to Rome.

The enemy they met in battle
Were fierce in their attack,
Many of those bombers
Never made the journey back.

One that nearly made it
A sight that I did see,
Crashed in a field nearby us
A frightening sight to me.

Now these brave airmen
In Bottesford churchyard lay,
A memory that is with us
To this very day.

The last German plane
That crossed our shore,
Crossed over Normanton
In that war.

It was on the twentieth of March
The luckiest day for me alive,
A year that I remember
It was in nineteen forty five.

This plane flew over Normanton
So low so quick and near,
With swastikas underneath the wings
One could see so clear.

Two airmen shouted out to me
“Take care, that is Jerry you can see”,
He sent out shells so thick and fast
I thought this day must be my last.

The shells burst into the wall
Shrapnel, muck and dust and all,
But to my surprise when up I stood
A shell was there piercing in some wood.

My thoughts now told me
To be quick to respond,
I threw it straight
In Goodson’s pond.

Two Spitfires that was trailing him
The airmen confirmed to me,
They took him out of the country
And dropped him in the sea.

Written by Ernest Robinson of Holme Farm, the first small farm as you enter the village of Normanton coming from Bottesford.

Ernest Robinson was the seventh of eight children of railway worker Thomas William Robinson (born in Yorkshire in 1873) and Sarah Robinson (nee Turner, born in Swinstead, Lincolnshire, in 1876). In 1911 the family was living in Normanton, where Ernest was born in 1912. His oldest brother was Sydney Garnet Robinson, who fought with the Durham Light Infantry in the First World War, after which he married and lived with his family in Normanton.