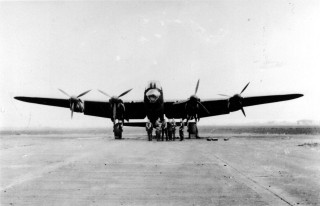 A No 207 Squadron Lancaster and crew on the runway at Bottesford. 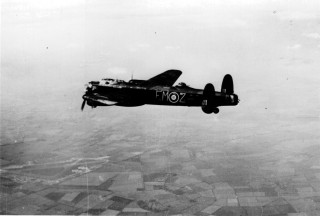 A Lancaster bomber of No 207 Squadron in air 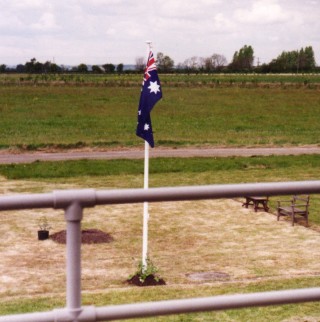 Commemorative flag hoisted at Bottesford in May, 1995. 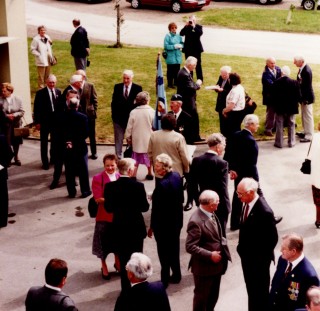 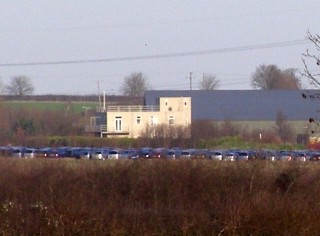 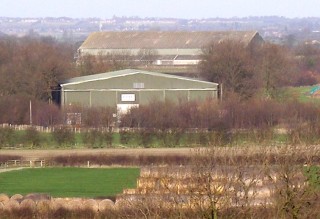 Hangars still in use, for industrial storage. 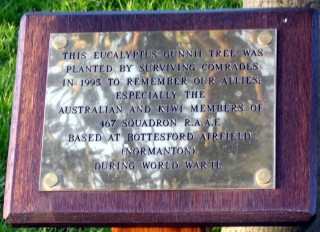 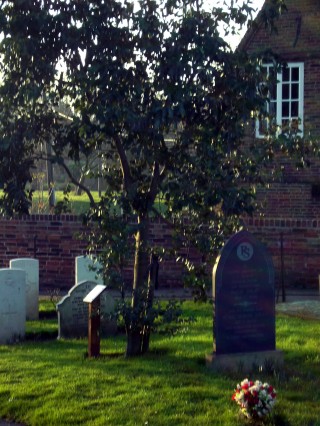 Bottesford RAF Air Station, built in farmland crossing the Leicestershire-Lincolnshire boundary close to Normanton, opened in 1941 and was at that time the only heavy bomber station in Leicestershire. Thereafter, operational squadrons based at Bottesford took part in some of the most difficult bomber raids of the Second World War. Airmen from Commonwealth countries and the USA used this base for training and bombing activities before it was eventually closed to flying in June 1947.

The site was surveyed in early 1940, and George Wimpey & Co commenced construction in November that year, laying concrete runways to cater for heavy aircraft. The main runway, 50 yards wide, was nearly 2,000 yards long with two others at 1,500 yards long crossing it to form a triangular layout. Thirty six dispersal pans and, eventually, ten hangers were built. The main gate was on the road north of Normanton, with a Direction Finding Station near the Three Shires Bush. A high frequency transmitting station was located off Sewstern Lane at the eastern edge of the site, with an ordnance storage depot for bombs in Moss Plantation south-east of the airfield, and another nearer to Normanton. The fuel store was to the east near Rowe Farm. The firing butts were situated across the road at Normanton, with level crossing type gates installed so that the road could still be used by civilians.  [Please refer to the map on Page 9 of Vincent Holyoak’s account of the airfield, and to the page “A very special Lancaster” by John Simpson, yet to be added.]

The base, which proved very muddy in wet weather, could accommodate nearly 2,400 airmen and 460 airwomen. The technical and living quarters were on the north eastern side of the airfield, in Lincolnshire, near to Long Bennington. Some of the cold wooden huts let in the rain. Personnel were issued with bicycles as the facilities were well spread out, but these soon became clogged with mud on wet winter days.

At the same time, mock airfields (known as Q sites) were constructed to decoy raiders from attacking the base at Bottesford. These sites, at Foston, Belvoir, and Tithby, were never attacked by the Luftwaffe, who it is believed used their decoy lighting as navigation aids. They were closed in 1942. A mobile beacon was used at Bottesford to flash the letters AQ in morse to guide homeward bound planes returning from night raids.

The airfield opened on the 10th of September, 1941, and a Vickers Wellington bomber on a training flight was the first aircraft to land soon after. No 207 Squadron, with a proud history going back beyond April 1st, 1918, was the first operational squadron to use Bottesford.  They were equipped with the Avro Manchester twin-engined bomber – a photograph of one of these planes is in the BLHS archive. Another unit, equipped with the Airspeed Oxford arrived  in October 1941 to train pilots in Beam Approach flying, and remained at Bottesford until 1944.

The Manchester bombers, armed with ten 500 pound bombs, participated in daylight raids on the docks at the French port of Lorient, and in raids on industrial targets in Germany. The battleships in harbour at Brest were another target together with mine laying sorties (known as “gardening”) off the Dutch coast. This aeroplane was, however, prone to a variety of hydraulic and engine problems which sometimes reduced its flying ceiling, and caused many crews to abort their missions. One flyer is reputed to have taken his overcoat with him on missions in case he became a POW!  Accidents and forced landings were a feature of life at RAF Bottesford. On one occasion a Manchester suffered engine failure at low level, then the other engine failed. The pilot attempted a forced landing on flat ground straight ahead but the rear fuselage and tail were ripped off on contact with the ground. The rest of the plane careered onwards at 100mph and came to rest in Fiskerton lake, much to the alarm of the anglers who were at the time conducting a peaceful fishing competition. Fortunately the crew of this aircraft escaped with only cuts and bruises, but one was badly concussed.

Engineers often visited Bottesford to study the difficulties experienced with the Manchester. One aircraft was test flown for them with a simulated full bomb load. Surprisingly it easily attained 17,000 feet but the pilot then noticed that the engine cowlings were coming loose. The flying instruments showed no problem but the pilot decided to return to Bottesford, and on his approach saw one of the engines moving up and down on its mounts. Overheating had almost melted the mounts, but the plane landed before disaster struck.

No 207 Squadron last used the Manchester in March 1942, and was re-equipped with the Avro Lancaster. Conversion training began in January, 1942, and by late April some crews were operational on the new aircraft. They formed part of the first “One thousand bomber raid” in May, 1942. The squadron now included many aircrew from Commonwealth countries, such as Canada, Australia and New Zealand.

Night bombing operations continued with mounting losses and accidents. Some casualties were buried in St. Mary’s Churchyard at Bottesford. The runways were deteriorating, so in September, 1942, No 207 Squadron was transferred to Langar. Then, after repairs were completed, No 90 Squadron arrived during November, flying the Short Stirling. The adjutant of this squadron was billeted with the village butcher in Bottesford High Street. Throughout the war the brave young men on operations were welcomed by individuals and families in Bottesford – some to worship at Chapel or Church and others just to sit quietly, read and relax. One flyer, Harry North, became a regular preacher at the Methodist Chapel. He asked a friend to take a service for him one day as he was assigned to operations, and unfortunately his plane failed to return from the raid.

No 467 Squadron of the Royal Australian Air Force flying Lancasters also took up residence  in November, 1942. No 90 Squadron transferred to Ridgewell in December, 1942, leaving the Australians to continue operations from Bottesford against industrial targets in Germany and U-Boat pens along the French coast. In 1943, No 467 Squadron took part in long range “shuttle” raids. The target might be the Italian port of La Spezia, or munitions factories on the shores of Lake Constance, but then the bombers would fly on to land in North Africa. They were able to attack other targets on their return trip to Bottesford, and bring back fruit, vegetables and wine bought locally before they took off.

The American Air Force were considering the possibility of night time raids at this time. A number of B24 Liberators flew into Bottesford during the Spring as visitors and some American aircrew even flew on operations in the Lancasters.

As 1943 progressed enemy night fighter patrols were increasing their abilities to attack bombers returning to their bases in England. No 467 Squadron was included in the attack on Peenemunde in August 1943. This target was on the Baltic coast near the Polish border where secret weapons such as the V2 rocket were being developed. A total of 596 aircraft took part in this raid, of which 40 were lost. The Australians from Bottesford were in the final wave of this attack by which time the night fighters had concentrated their numbers.

One particular Lancaster, R5868, S for Sugar, had an exceptional war record. This aircraft was transferred to Bottesford after having already completing 68 operations and went on to finish the war with 137 missions. It can now be seen in the RAF museum at Hendon. [Please look out for “A very special Lancaster” by John Simpson.]

No 467 Squadron was transferred from Bottesford to Waddington in November, 1943, after an intensive period of operations lasting a year and costing many lives from those of Wing Commanders to Sergeant Pilots.

Earlier that year, Airspeed Horsa gliders had been stored at Bottesford. Allied air forces were now beginning to prepare to drop paratroops and supplies behind enemy lines, and to land troops from gliders as well. The 436th Troop Carrier Group (TCG) of the US 9th Air Force flew into Bottesford in January, 1944, with sixty Douglas C47 twin-engined transport planes, and sixty Waco assault gliders were delivered via Bottesford Railway Station to be assembled from their packing cases. One of these cases eventually became a cricket pavilion at Staunton  Harold. The airfield was re-designated as Army Air Force Station 481 (or 480 – sources disagree).

Considerable training took place to prepare these forces for transfer to southern England and the D Day invasion. As they left, more Americans moved in. The 400th TCG undertook training in formation flying, glider and parachute dropping techniques to prepare for “Operation Overlord”. The Americans also took the opportunity to explore the area by bicycle and made friends with folk in Bottesford. There is an unconfirmed story that the Stocks were “liberated” one night, but then miraculously returned a few days later!

In July 1944, Bottesford was handed back to Bomber Command. The buildings were re-furbished – doors and floorboards had been burnt as winter fuel. The airfield was now ready to act as a bomber training base. Thirty six Lancasters of a “Heavy Conversion Unit” flew in to train crews for this type of aircraft. It was the first unit to prepare pilots on Lancasters alone for all their ” heavy”  training, which reduced the training period by two months. The planes comprised examples of many different types of Lancaster, powered by variants of the Rolls Royce Merlin engine together with some powered by Bristol Hercules engines – the spares problems created by these various power plants were horrendous. Night flying, “circuits and bumps” and other training tasks contributed to a high accident rate. Fighter affiliation exercises brought Hawker Hurricanes to Bottesford, and later Supermarine Spitfires and Bristol Beaufighters. On the night of March 20th, 1945, a lone Junkers Ju88 raided the airfield, dropping several bombs in a low pass over the runways and buildings, and attempting to fire cannon shells into a train standing at Bottesford station, but with little success.

In April 1945, Bottesford was downgraded to be a sub-station for training purposes.  The last flying accident occurred at Bottesford on 13 July, 1945, when of all aircraft a Wellington on a night flying exercise suffered engine failure and was diverted to Bottesford. The second engine also failed as it approached the runway but all seven crew on board scrambled to safety before fire broke out in the wreckage.

Once the war was over Bottesford became a relief landing ground, and was closed to flying in June 1947. Equipment disposal and maintenance still continued and sites such as Bottesford were required for the storage of stacks of unused bombs and ammunition awaiting disposal. The site was finally closed down in March 1960.

As a ‘tail-piece’, a function to commemorate the 50th Anniversary of the end of World War II in Europe was held in Bottesford on May 9th, 1995. Bottesford Parish Council entertained  a large group of visiting Australian airmen from No 467 Squadron. Over 150 attended the Village Hall for refreshments and an illustrated talk by Vincent Holyoak. The party later toured the airfield site and a memorial tree was planted near the Control Tower.

[Photographs to be added, taken from the Control Tower by John Simpson during the visit, showing the Veterans at the Airfield and the tree waiting to be planted.]

1. “Leicester and Rutland Airfields in the Second World War” by Martyn Chorlton.

2. “On the Wings of  the Morning”  by Vincent Holyoak. (Vincent Holyoak has kindly given permission for the republishing of his book on this website. Please click on the title to access).