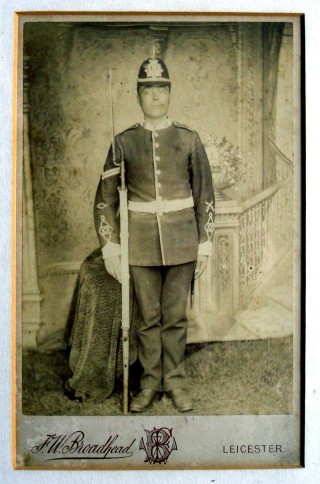 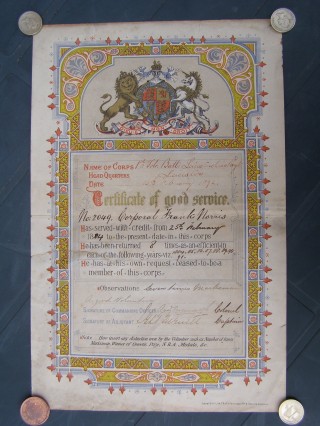 The Norris family were once wheelwrights on the High Street. Gerald’s grandfather was Frank Norris, who served in the First Volunteer Battalion Leicestershire Regiment 1884- 1891, where he was recorded as a notable marksman. He is photographed in his uniform and in later life.

Gerald’s father, John, was in the Second World War 1942- 1945. He joined the Royal Army Service Corps, also known as “Run Away Someone’s Coming!” A few days after the D Day landings, John drove a lorry,  transporting the ammunition for the Artillery. Unfortunately the family have no photos of John at this time.

Gerald himself was 10 years old at the start of war. He helped his father to make the blackout shutters, and damaged a finger nail in the process! He does not recall being frightened in wartime, because the noise of the bombs seemed to be too far away. There was bombing now and again, but no direct hits on Bottesford. Down Orston Lane, near the black gates, on the yon side of the railway line there was a bomb hit; the target was thought to be the railway junction, but they were not big bombs.

Gerald also recalls 4-5 big bombs dropping on Barkstone Lane and leaving big holes. German Bombers were thought to be on their way to Nottingham but were intercepted by Spitfires. Gerald and his mates would bike to Palmer’s hills to watch the Lancaster Bombers take off from Normanton Airfield, until the boys were shooed off by RAF personnel. Crippled Aircraft returning home would, if they could not make the Airfield, would try and land on what is now the Clay Pigeon Shooting Range, on Orston Lane.

Gerald’s two sons continued in the army tradition. Frank, now 51, has an American wife, and served in the US army for 21 years, as a Top Sergeant. Greg joined the Royal Anglians when he was 17years old. He served in Northern Ireland, Germany and Cyprus. He was a member of the British Army Shooting Team and took part in tournaments at Bisley, England and in America.