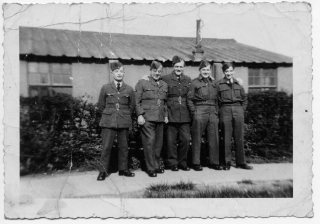 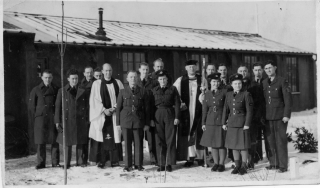 A Sunday Service but apart from my father, front left, I do not have any names. The Gentleman in the middle appears to be a Bishop.
Our thanks to Sheila Hartley 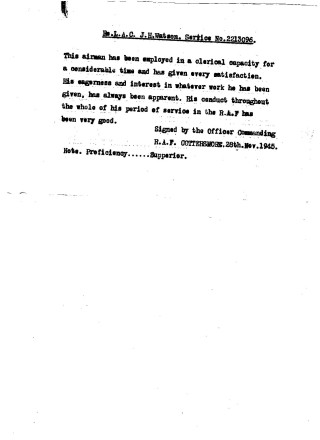 My father James Herbert Watson was born in 1900.  He was not called up for WW2 at the outbreak, but had his medical examination in 1941 and received his mobilisation papers in October 1942.  He had to report to Padgate and from there was sent to Kirkham, both in Lancashire.  I am not sure where he went from there but he was definitely at RAF Metfield at some stage and used to tell the tale of an all day journey to Honiton in Devon with another airman.  On arrival it appeared they had been sent to the wrong place and should actually been at RAF Honnington in Suffolk just a few miles from Metfield.  They were given a meal and a bed for the night and then sent on their way the next day.

I think he arrived in Bottesford some time later 1943/early 1944.  He was a very good pianist and a member of the Methodist Church so went along to the Wesleyan chapel in Long Bennington and played the organ when he was available. Through this connection, he was able to arrange for my mother and myself to go and stay with the Winter family.  They had the little sweet shop at the end of the village near the Wheat Sheaf.

We went three times in all but I cannot remember which year we went twice.  We were certainly there on D Day 1944.  I was seven years old and we were in the fields in a sunken lane somewhere towards the airfield on that beautiful evening and saw the planes and gliders setting out. That evening I remember waking up in the night and thought it was thundering but my mother said it was the planes going over.  She told me it never stopped until complete daybreak.  I had no idea what had gone on until I was quite a bit older and began to realize the implication of what I had seen.  My mother said she saw two gliders attached to some of the planes.  She was told for quite a long time after that she was wrong but much later on she was proved right.

When we stayed at the Winter’s house, we slept in a bedroom that went up behind the fireplace in the older part of house. It was all very exciting to me a town child.  Although we lived in a terraced house, we had mains water and a bathroom, gas and electricity, buses, trains and trams, shops and libraries on the doorstep.  To get your water from the pump and all the other differences was another life to the one I led normally. I remember the young airmen from the base used to come down to the Wheat Sheaf and go down to the mill and jump in the weir which I thought was very daring.

It is only recently that looking in detail at my fathers bits and pieces I realised he was in Bomber Command.  He had been assigned to what was known as the Awkward Squad. A collection of men older than most of the RAF and without, I imagine practical skills. They were clerks, shop assistants, civil and local government employees etc.  I doubt whether my father knew one end of a screwdriver from another.  However, his discharge references speak highly of his clerical abilities.

One contribution he did make however was to the entertainment world.  The Americans were on the base and one of the entertainers was called Stubby Kaye.  Dad who was only 5ft 3 acted as his Dummy and that went down very well indeed.  He had been used to singing and playing the piano in church concerts, where he was quite at ease in the situation.  He was also scored for a cricket match as he did for a team at home.  We went to watch one particular match and to the tea that was put on afterwards.  I was dumbfounded at the dishes of syrup on the table and could not understand why anyone would want to put it on their meat and vegetables.  My father also was very shocked one night when one of the Yanks came back with a pint of milk he had bought off a farmer across one of the fields.  He had paid 1.00 for it.  My father was furious at this but the yank just said.  “Listen Red, I wanted the milk, he gave it me so why not”. The Americans on the base used to give me candies, tins of salted peanuts and salted crackers.  I also had a ride on a jeep so was very pleased with myself. I have just been informed by my husband that Stubby Kaye was quite a famous entertainer.

Through playing the organ at the chapel, we had had to know the Mayfield family in Costa Row, Long Bennington.  I remember four of them, Sid, Elsie, Millie and another sister who lived down the lane opposite the Wheat Sheaf.  She was married to a farmer and had a new baby and a little gang of children went down to inspect it.  Millie was a year older than I was and I can remember Penny who lived at the chip shop and I think I remember a little boy who lived at the butchers.

I rather think Penny went to a private school but am not sure about that.  I was aware that the village school did not seem to be up to the standard I had reached in reading and writing.  One day we went on a picnic and as we went down the road leading to the airfield there was a party of Italian POW coming from the opposite direction.  There were two or three adults with us but the soldier guards seemed to push them into ditch until we had passed by.  I remember thinking it was rather a nasty thing to do.

My Mother used to say she thought the group where my father was quite enjoyed themselves.  I think he and Freddy? Marks were used to clown about a bit. They both seemed to be able to make the others laugh by a joint mild comedy act.

I am enclosing copies of two photographs.  The smaller one is of my father and his comrades.

The larger one is evidently after a Sunday Service but apart from my father, front left, I do not have any names.  The Gentleman in the middle appears to be a Bishop.

I have happy memories of my time spent in the area. We paid a fleeting visit a few years ago and I was interested to see the improvements in the village but it still seemed like a sleepy backwater compared to life in the urban North West.