Memories of The Bull 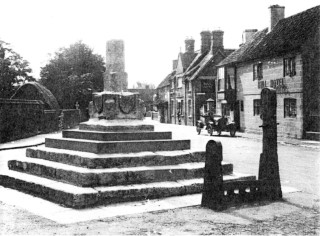 Was This the First Car in Bottesford? The Bull, 1920s 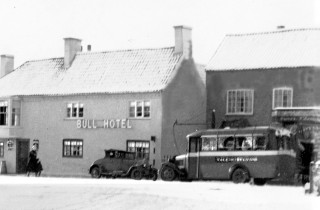 Mr. Goodson's Buick & a Randall's bus outside The Bull. 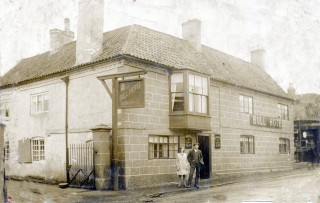 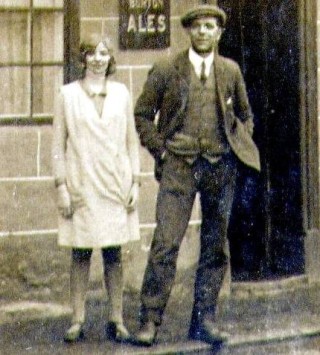 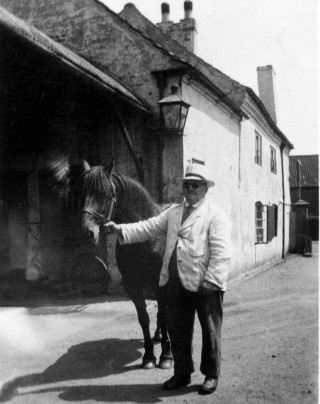 Pharoah Hare in The Bull yard. 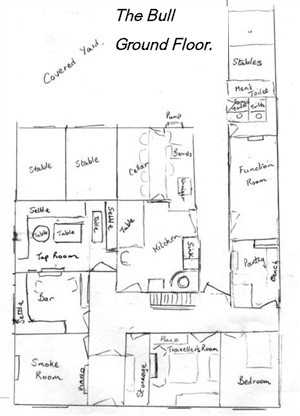 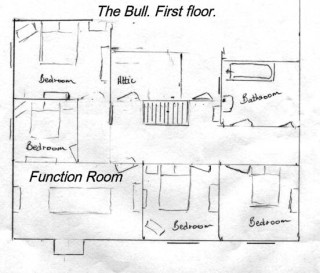 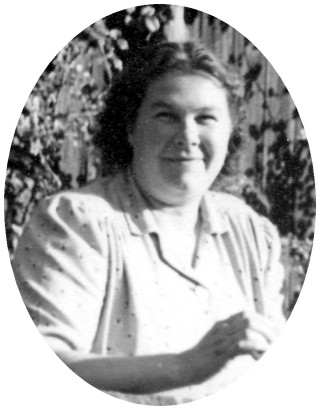 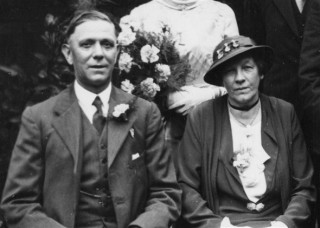 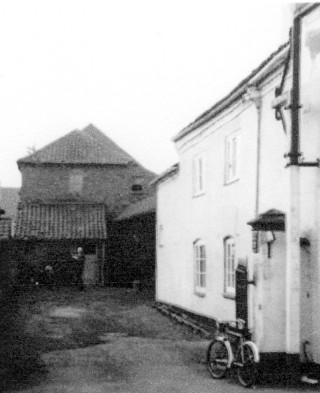 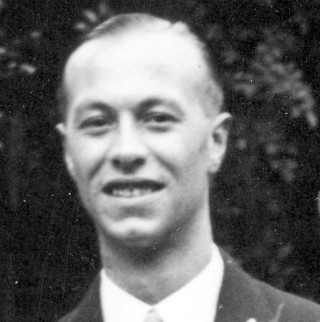 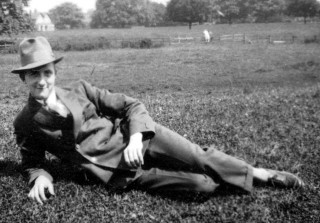 My earliest memories of the Bull are going to see my Granny and Grandad, who were the Landlady and Landlord. My Grandad was said to have had the first car in Bottesford. I believe it was a Buick. I can just remember that it had a dicky seat in which my sister and I used to sit. We always had a ride round Belvoir on a Sunday evening as the Bull didn’t open on Sundays until seven. We used to end up at some relatives in Stathern for a cup of tea and a piece of cake.

It was a busy pub, especially on Thursdays, when Goldings held an Auction Market of rabbits, wild and tame, chickens, fowls and eggs in the Bull Yard, which in those days was covered. In the Summer huge Shire horses came and were kept in the stables. A man came with them and they were taken to a field near the church to serve the mares of the farmers. This was in the days before Artificial Insemination.

At the end of the Bull Yard, which is now the Green Grocers, there was a Butcher’s Shop. The beasts were brought down and put in a shed which was called the Pine Pen. They were not fed – hence the name Pine Pen – but were given water. The next day they were felled and pole axed. The sheep were next, followed by the pigs.

My uncle kept a few cows in some of the sheds and the milk was put in churns and collected from the top of some steps which were behind what is now the Maltings. My Granny died in 1943, and as my father and uncle Frank were in the army, my mother, sister and I moved from our house to the Bull, to look after my Grandad. It was quite a rude awakening, as we left a warm house, with hot water and a bathroom, and a flush toilet, to live in a cold, draughty building. There was a bathroom, but only one cold tap on the basin, and one on the bath, so to have a bath meant heating a bucket of water and carrying it upstairs.

There were four public rooms, but one was only used on special occasions, such as when my Grandad had been shooting with his friends. They were Fred Lenton, Lance Keel and Walter Miller. My Mother cooked them a lovely meal of pheasant, partridge with all the trimmings, followed by a lovely sweet. This room was called the Travellers’ Room. That was the only time that I remember a fire being lit in it. I was allowed in it to practise the piano or to dust it!

As you entered the Bull through the main door on Market Street there was a room on the left, which was known as the Smoke Room. It had a piano in it which was used occasionally for a sing song. The next room was the Bar, which had a coal fire. It was quite a small room, and so was the warmest in the building. It had a leather settle round two walls, and some Windsor chairs. There were some copper spittoons under the settle, which my Mother removed when we moved in with my Grandad. Silver tankards hung up in a corner, but these were kept for special customers.

The next room was called the Tap Room. It had two wooden settles round the room, which were scrubbed white. There was a range in this room which had an oven on one side, and a boiler on the other. On the same wall as the range, there was a big metal door, which was used as a cupboard. It was always called the Bread Oven. Below it there was a metal grill, which years ago was where the fire was lit to heat the oven. There was a large wooden table, also scrubbed, and a round one in the corner. This was where we ate our meals – after two o’clock on weekdays and before noon in Sundays.

The kitchen had a large sink, which was where the washing up was done. In the corner next to the sink there was a large copper. There was a large table which was used for baking and ironing. Wash day was always on Monday. The copper was filled by a bucket and the fire was lit underneath it. Clothes were scrubbed in a rubbing board in the sink and then boiled in the copper. The clothes were rinsed two or three times and then put through a big mangle, which stood just inside the cellar that opened off the kitchen. The clothes were then pegged out on lines in the covered yard.

At lunch times the school children would cross the road and walk through the Bull Yard to go to the Chapel in Queen Street where school meals were served. My Granny, and later my Mother, would stand on guard to stop naughty boys giving the sheets a swipe as they passed through.

The cellar was where the beer was kept. My Grandfather used to tap the wooden barrels and take a drop out and hold it up to the light and taste it every day. He always said that the right temperature was very important.

There was another room beyond the Traveller’s Room, which was used by my Grandfather after he had pneumonia following the death of my Grandmother.

Finally there was the Pantry – a big, cold room where all the food, cutlery, crockery and pans were kept. One wall had a low shelf on which the milk and eggs were stored. After a cow had calved, the first milk went to the calf and the next, called the beastlings, was used to make rich custards. There were big stone jars with eggs in isinglas to preserve them when they were scarce.

At the other side of the Traveller’s Room was a small store room, which was where the spirits and crisps were stored – only Smith’s in which were tiny amounts of salt in blue paper, with which you salted your own.

The floors were all tiled and there were pegged rugs near the fire places – except for my Grandfather’s bedroom, which had a carpet! All the floors were washed every morning and scrubbed on Fridays.

Upstairs there were five rooms – four were furnished with double beds, wardrobes, dressing tables and chests of drawers. The room at the front, which had the bay window in it, was very big. It had a lovely polished table , which I am sure would seat at least sixteen people. There was a sideboard and a big display cabinet. There were big mirrors at either end. The door had a smaller door within it which you could open from the inside to see who wanted to enter. I was told that this room was used for meetings, but not whilst we lived there.

In the corner of the bathroom, which had once been another bedroom, was a door that my friend Betty and I opened one day. We discovered another flight of stairs. We went up to find two or three attics. Old newspapers covered the floors. We had taken a candle with us to light our way. We thought it was very exciting, until my Mother wanted to know where we had been. We said, “Nowhere,” so she took us up to the bathroom and showed us our dusty footprints. We were told never to go up there again. We might have set the place on fire!

You will have gathered that there was no toilet in the building. The toilets were way up in the yard. There was one for the Ladies, one for the Men, which I never entered, and one for the family, which was always kept locked. Toilet paper was squares of newspaper, until after the war when we had shiny Izal. The wooden seats were scrubbed every day – not my favourite occupation! Once a week the “Soil Cart” came round to empty the buckets. I would be lying in bed in the summer with the window open and my Mother would call up, “Close your window, the Dilly cart is coming.”

The war years were busy because the R.A.F. were at Normanton, followed by the Americans. Occasionally we had to close early because we were running short of beer. I don’t remember ever seeing anyone the worse for drink. The Americans were very generous with chocolate and chewing gum. My sister helped to serve, but I wasn’t allowed. I had to wash the glasses.

We didn’t go hungry during the war. My Grandfather shot rabbits, pheasants, hares and partridges, and we kept two pigs in one of the stables, which we fed on pig potatoes, which were cooked in huge pans on the stove – the same potatoes which are now called salad potatoes and are more expensive than the ordinary ones. My Grandfather had an allotment, where he grew potatoes, leeks, cabbages etc.. We had fruit from trees in a field called the Shrubby, which is now part of Bowbridge Gardens.

At the end of the war my Uncle Frank came home to take over the Bull and my father came home, and we moved back to our old home.