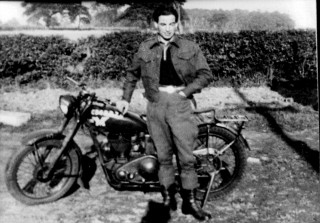 Dick Robinson as a dispatch rider, 1944, leaning on his motorbike.
Neil Fortey 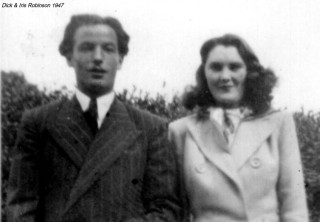 Dick left school at 14 in 1940 and worked for Tommy Samuels the coal merchant, eventually becoming a lorry driver. You did not have to take a test in those days. The lorries were leased out on the Normanton Airfield; Normanton Lane was widened about this time also. The Airfield was built by Wimpy and Douglas, and was bombed while being built. One day, there was a serious explosion on the site, and Dick, then aged 16, was very badly burned. He was immediately immersed in a tank of water and sent unconscious, to Newark hospital. The hospital was transferred, in wartime, to an old workhouse in Bowbridge Road, Newark and was specifically used for treating injured service men. Dick was in hospital for a year and had to learn to walk again.

Trainloads of bombs were transported daily into Bottesford railway station and then brought by lorries to the Airfield. Many bombs were lying on the roadside; there were so many of them.

Dick remembers Xmas 1943 when he enlisted in the Army. It was snowing as he travelled to Scotland to Fort George and Fort William. Some training was carried out with the Black Watch. He became a Dispatch Rider in Shropshire and Wales.

There were many POW camps in the area because of the open countryside and Dick delivered the mail between the camps. He had to learn how to drive without lights in the blackout, and know where to go because all signposts had been removed during war time! (There was an Italian P.O.W. camp locally at Allington; this is a large caravan site today.)

Dick married his wife Iris, whilst still in the Army, and he was demobbed in 1947.

Sid left school at 14. His first job was as a lad porter at Elton station, earning 10 shillings a week. He worked from 6 am to 2pm, daily, one week and 2 to 10 pm the next week. He gave 7s 6d to his father and he had 2s 6d for himself! His brother Stan helped him to get a job as a stoker/fireman at Grantham Locos in Station Road, Grantham. The workers had to live within 10 minutes from work. Sid, Stan, and George Taylor from Bottesford lodged at College Street. There were no cakes and only 1 hot meal a day, with 12 hour shifts.

Several bombs dropped on Grantham; the railways escaped damage but Marcos was hit. Sid recalls taking trainloads of ammunition and bombs to the docks and troopships. In blackouts, tarpaulins were placed over the cabs to stop glare from the fires. It was extremely hot-you could fry eggs on the shovel! Very hard times.

Lucy Short, nee Turner and a Mrs Braithwaite from Bottesford, also worked at Grantham Locos, cleaning engines and working as fitter’s mate. Lucy, like many women, covered the work previously done by men. Sid remembers Lucy wearing clogs when working with the boilersmiths to prevent getting scalded. Sid continued to work with Grantham Locos after the war, and finished working there in the 1950s.