The Memories of Bill Burrows

As told to Sue Dunsmore 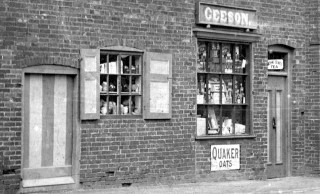 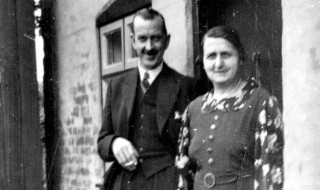 Mr. and Mrs. Taplin outside their cottage on Queen Street. 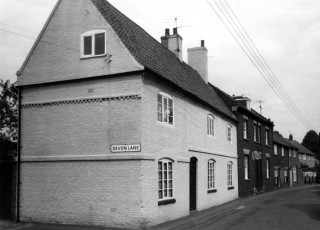 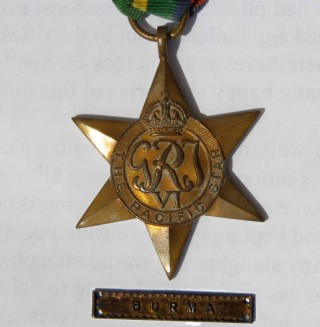 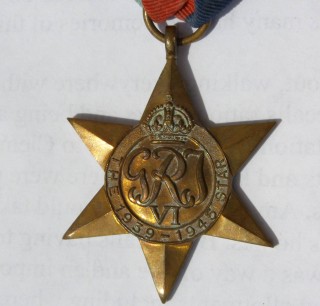 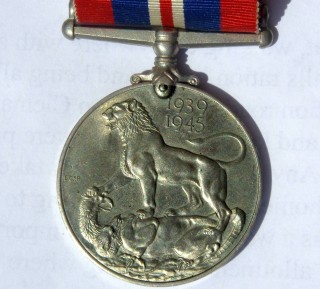 Bill can remember the Miss Geeson sisters, who ran a small grocery shop in Church Street. They had a favourite saying, “Laugh at a funeral, cry at a wedding”. The Taplin family had a Fish and Chip shop on Queen Street . Harold Deacon was a hairdresser, where the Fruit and Vegetable shop is today. Miss Winn had the corner shop at the end of Queen Street .

When the new Grantham Road was being built, Bill would watch the concrete being mixed on the site where the Gardening Club shop is today, and recalls having fun on the trolleys as they returned from the Red Lion!

Bill left school at 14, and worked at the Long Bennington Bakery for the princely sum of 3 shillings a week! He then worked for Harry Phillip’s Bakery on Chapel street , Bottesford, for 12 shillings a week, when he was 15 years old. Bread cost 4 old pennies then, which would be the equivalent of 2p today!

THE WAR – ON THE HOME FRONT

At the beginning of W.W.2 Bill was a runner for the Air Raid Wardens. Their Headquarters are now Sid Culpin’s greengrocer’s shop in Queen Street . There were very few telephones then and Bill, with others, ran a communications network throughout the village.

He remembers the Aerodrome being built at Normanton, at the beginning of the war, and the big searchlights that were in a field on the corner prior to entering Normanton from Bottesford. The Army was based at Orston Lane , as well as storage dumps.

Bill joined the Home Guard when he was 16. It mainly consisted of older men and men too young to enlist. Farmers were also involved because they were a reserve occupation and could not enlist. When the Home Guard started, they only had pitchforks for weapons; eventually they were given rifles, but never had any bullets to put in the rifles! The men always ensured they finished their duties at 12 o’clock on Sundays outside the Red Lion. Bill recalls many happy memories of this time, in spite of everything.

Then there was the blackout, walking everywhere with a gas mask in a box and rationing. Bill recalls ration books and being allowed 2oz of butter a week. He lived on Station Road, next door to Clematis Cottage. Many people had allotments and kept a pig. There were pigsties at the back of Bunkers Hill cottages. Any slaughtering would take place in the back yards of the residents cottages. Bill recalls having to hold the back legs of a pig for slaughter; it was a way of life and pigs were an important source of food. There were also many allotments including where the skateboard park is today, right up to the Old School House.

Bill enlisted at the age of 18. He travelled to Skegness to the HMS Royal Arthur training camp, the original Butlins Holiday Camp. Lord Haw Haw was heard to say on the radio that Germany had sunk the HMS Royal Arthur, and it was a source of amusement for some time.

In March 1943 Bill went to Plymouth and trained as a chef. Later that year he was in the Pacific on HMS Suffolk, in the war against Japan . There were 1000 men on board and the ship was 162 metres long. Conditions were cramped with no room for luxuries.

HMS Suffolk travelled to Bombay and Australia and back again as a shadow ship to the American Aircraft Carriers. Bill travelled to South Africa and then on to Burma for the fall of Rangoon.

(Click this link for a picture of HMS Suffolk).

He spent the remainder of the war on HMS Renown in the Home Fleet.

(Click this to link to a superb gallery of pictures of HMS Renown on the US Dept of the Navy’s Historical Centre website).

Bill completed his service and was demobbed on September 13th 1946 .

He was awarded three medals:

1.The Pacific Star and Burma Bar

3. The War Medal 1939-1945, showing a British Lion standing over a vanquished dragon. The reverse shows the head of George V1.