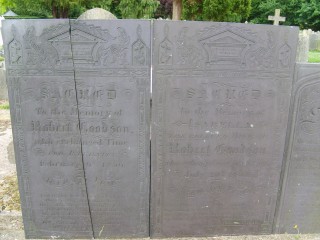 Hi, this looks an excellent site.

Many will be familiar with the surname Goodson in the locality. Despite the fact that there are only about 300 families with this name worldwide, there are to my knowledge at least two families locally with this name. The head stones shown are my three-times Great-grandparents and are in your churchyard. Robert farmed in Bottesford and the Hall, Harby, and Isabella farmed as tenant at Muston Gorse.

I have researched the local Goodsons, but have been unable to establish if they are related to me.

I have traced the Goodsons back to John, born 1670, from Harby. Most are from Harby, although some are from surrounding vllages and as far afield as Long Eaton. Isabella on the Headstone was Isabella Thorpe from Barton in Fabis. I’ve also been unable to turn up any present day Thorpes.

Anyone able to help?

Footnote: The wedding photograph referred to by Jon Hudson in his comment is located on the Herbert Hudson page in our WW1 archive.