You are here: Home>People>Village families>Memories of the Dent and Stanley Families of Bottesford

Memories of the Dent and Stanley Families of Bottesford 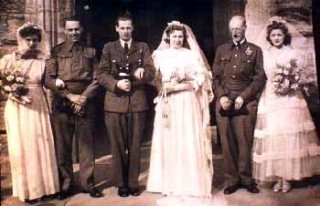 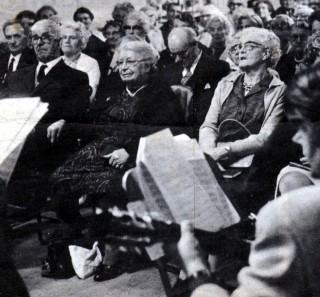 Mrs Maria Stanley (centre) at a concert in Bottesford. 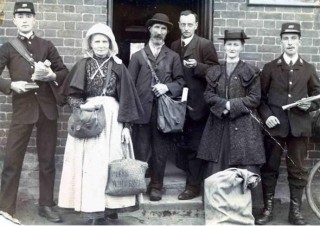 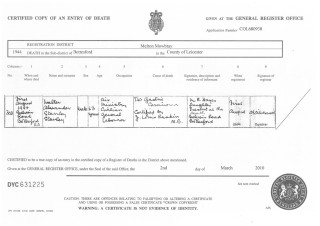 Mrs Myra Bryce and her daughter Mrs Barb Hafslund first contacted us from Australia, back in 2008, to enquire about their forebears in Bottesford. This page is a belated attempt to answer some of their enquiries, and to ask for more information about the Stanley family and their home in Bottesford (please add comments at the bottom of this page).

“My mother is Myra E Stanley – born 1924, Bottesford – daughter to Maria Dent and Walter Alexander Stanley Stanley (W.A.S. Stanley). My name is Barbara (Barb) Hafslund, and I am daughter to Myra E Stanley (now Bryce).  My cousin, Michael Mackley still lives within the village, I believe.

I’ve been trying to track my grandfather’s birthplace down for nearly 20 years now. He was a Walter Stanley and married Maria “Cissy” Dent. The Dents have been long time residents in Bottesford and we seem to be related to most if not all of the whole village!

My mother is now 86 years old, and very frail. Sadly, her identical twin sister, Marjory Rose, died here in Australia last June after a series of massive strokes. Mum is now the only remaining child of Maria Dent and Walter A S Stanley.

My mother’s family was in the village from the early 1500s. The first Dent I can find in the village is a Joseph Dent, who married Alice Wood in 1767. However, our line goes back to just prior to the beginning of the parish records in 1537 through the Painter line – including the Lambs, Buggs, Woods, Calcrafts and many other names. In fact, I think I have traced them into the 1400s with the Painter line.

One of the Dents married a Skillington, and we have a Joseph Dent married a Anne Rawdon (Rawdin – ed) who died shortly after giving birth to her 2nd child. The Rawdons (or Rawdins – ed) who married my Dent were from Nottinghamshire.

The Stanley line is actually not from the village. My grandmother met Walter A S Stanley during the First World War, whilst she was working as a ladies maid to someone called Lady Wombwell. Apparently, this Lady was visiting a convalescent home in Brighton, we think, and Maria Dent met her future husband there. Walter Stanley was supposedly born in the London area.

My grandfather became quite well known within the village. My great Aunt Sara (sister to Maria), who married Harry Phillips, the baker who owned the local bakery, lent money to him to set up a fish and chip shop. I have to laugh, because, apparently, Walter set the shop up and was doing quite well, but one particular morning he opened the shop and started the huge fat pans heating up and then suddenly remembered he had forgotten he had left something back at his home. He raced back home to pick up what he had forgotten – got sidetracked when my grandmother asked him to do something – and the fish & chip shop went up in flames!  I’m surprised that no one has ever mentioned this.

By the way, Mum remembers that her twin, Marjory, was very close friends with a Marcia Christmas. Marcia’s father had a garage (Christmas and Chorlton) just up the road from where they lived. Mum married on July 10th, 1943, in the village, to Ernest Howard Jarvis.

I expect that someone from my mother’s generation in Bottesford will remember the twins, Myra and Marjory Stanley. They were utterly identical in looks and loved to play tricks on one and all. I am pretty proud of my family there, and whilst they were of the labouring kind, each of those ancestors has made our family what we are now.“

Walter Stanley died on the 1st August, 1944, at Belvoir Road, Bottesford. We emigrated to Australia in July, 1964, and very quickly relocated from Nambour, Queensland to Mount Isa, Far North Queensland, where my father made a living as a miner underground. My eldest brother, Dennis, (he was born in Bottesford too, by the way) emigrated here too when he married his Irish wife, Patricia Green.  Sadly, Dennis was killed only a few months after arriving here, after starting immediately to work underground in Mount Isa Mines. There was a pretty terrible explosion underground and Den was killed and the other miner with him, Bill Steen, was injured very badly. We then rapidly moved to Brisbane.  My mother was unable to deal with living where her son was killed.

Kellys Directory  – Our project records provide information about the Dent family, and also a little about the Stanleys though it is open to doubt whether this refers to Mrs Hafslund’s grandfather. Editions of Kellys Directory published between 1928 and 1941 record W. Stanley, chimneysweep, in Bottesford, but Mrs Bryce and Mrs Hafslund doubt strongly if this is Barb’s grandfather. Barb writes “This chimney sweep business regarding my grandfather is a real mystery. My Mother can never remember him even knowing how to clean a chimney never mind being a chimneysweep. Apparently, as long as Mum can remember, her family always hired someone to clean their chimney, and she seriously doubts that her Mother would have let Walter loose with any kind of implement in their house! Also, the time period of the Kelly’s Directory doesn’t ring true with my Mother, as she says her Father was working at the munitions factory with herself and her twin sister, Marjory, during the war.

There were only two W. Stanleys that I know of in that time period, my grandfather and his son, also named Walter Stanley (he was apprenticed as a wheel wright upon leaving school). Mum has said that her father would have been more inclined to be an agricultural labourer more than anything, as he was happiest pottering around their garden and glasshouse, growing grapes and making home-made wine.”

At a house on High Street, Bottesford lived:

At a house on Main Street, Easthorpe lived:

William Dent, 18, an agricultural labourer, appears to be renting a room in a multi-occupied cottage at The Nook, Bottesford.

At a house on High Street lived:

At a house on Poplar Street, Easthorpe, lived:

In a cottage at Easthorpe lived:

Parish records confirm that widow Ann Dent (nee Longlands) married widower John Asher on 28th March, 1853. Unfortunately, he died about five years later when he “was killed by the kick of a horse”.

At a house on Back Street (Albert Street) Bottesford lived:

Barb Hafslund adds that “Jane Dent was Jane Rudkin originally.  She had a brother John who was a Chelsea Pensioner.  No records exist for him apparently.  After talking to the Rudkin one name society, they, too, were unable to track him down”.

In a cottage in Easthorpe lived:

Ellen Dent 15 was a visitor at the butcher’s of Arthur and Louisa Taylor on Bottesford High Street.

Maria Dent was Mrs Hafslund’s grandmother, and Sarah her great-aunt. On the date of the 1901 census, Maria was not at home, but her elder sister was there and her younger sister Ellen was also in Bottesford that night.

This information has been assembled from Bottesford burial records for 1730-1900 compiled and published on the internet by Guys of Bottesford – go to http://freespace.virgin.net/guy.etchells/Botprindex.htm