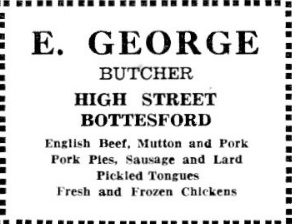 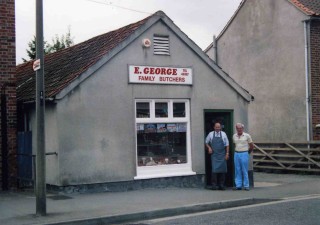 Eric George with Ian Norris in the early 1990s. Modern hygiene regulations required the removal of the original stable door, renovation of the windows and installation of refrigeration and ventilation. The hipped roof shown in the early photograph has been replaced with a louvered vent 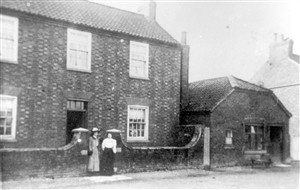 Millers farm and shop in the early 1900s 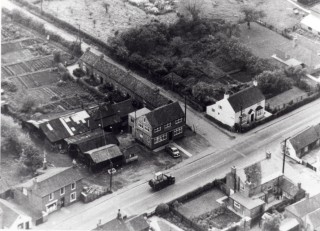 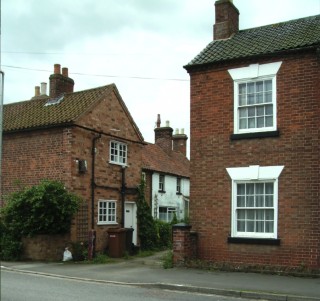 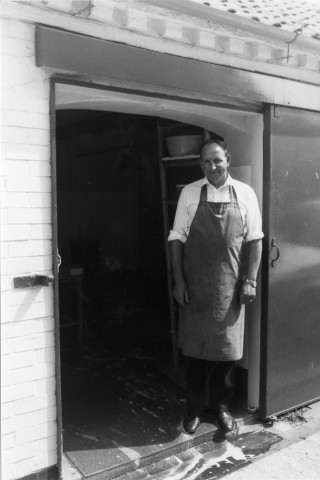 Eric George at the shop side entrance

Many longer term residents will recall that until the 1990s  Bottesford had three butchers’ shop known locally as Taylor’s; Goodson’s and Eric’s. ‘Eric’s’ was run by Eric and Margaret George. Their business occupied a single story building next to the old post office opposite what is now the Spar Shop on the High Street.

Eric George was born in Knipton in 1926. John George, his father, worked in the butcher’s shop next to the Post Office in Bottesford. Mr Walter Miller, a farmer, owned the shop, his farmhouse (No. 23) was next to the butcher’s shop and his farmland was behind the house. The farm buildings are now residential accommodation and Granby Drive was built on the land.

Mr John George used to cycle every day to Bottesford. In 1928, when Eric was two, the family moved to Bottesford and lived in one of the cottages behind No. 43 High Street, known locally as Challands’ Yard.

The family later lived on Pinfold Lane in the council houses built in 1938. Eric remembers that the rent for a council house was 6/11 a week and 4d extra to have a shed.

Mr. Miller reared and slaughtered all his own stock. This was done in one of the buildings behind the shop.

In 1951, Mr. Walter Miller sold his land for building and Eric’s father bought the butcher’s shop. By this time, Eric had been working since the age of fourteen. He had worked for Tommy Samuel for three years. Tommy Samuel, son of Mr. William Samuel, (grocer of Market Street till at least 1941) had several trades. He was a carrier, (Mr. Tinkler drove lorries for him), a coal merchant (his coal yard was in Pinfold Lane) and a farmer, with cattle on land on Normanton Lane.

Eric also worked for the Jackson family at The Chestnuts farm for nine years on the High Street. Henry and Frank Jackson had 200 acres of mixed farming, with land off Nottingham Road and a small paddock where Pinfold Close is now situated. Henry lived at The Chestnuts and Frank lived in a bungalow in a paddock on the north side of the approach bridge. This paddock has been developed to become Roberts Drive. The Taylor family owned the land that is now Laurel Way.

Eric’s experience with animals helped when he joined his father in the shop in the fifties and the shop facilities were extended. However, foot and mouth in the 1960s meant an end to slaughtering on the premises. New health and hygiene measures and the cost of new equipment meant that it was better to buy stock from the wholesale markets at Grantham and have the stock slaughtered at the cooperative slaughterhouse there.

All three butchers produced their own sausages. A key ingredient was pigs intestines for the sausage skins.  ‘My father scraped the pig intestines using a piece of wood, similar to a wooden spatula. However, the intestines became difficult to obtain and with stringent hygiene laws it was better for me to use artificial casings.’

Eric has many childhood memories of village life. ‘There was a field up Barkestone Lane past Firth’s farm where cowslips grew in abundance. It was possible to get sixpence for a pillowcase of cowslips. The cowslips were sold to Miss Richards. She lived in the small cottage opposite to the butcher’s shop and she made cowslip wine.’

He also recalls hearing a tale about one of the teachers at the school. ‘The church spire was being repaired and the workmen had gone, presumably leaving ladders and scaffolding in place. Miss Raithby threw her teacher’s dignity to the wind and climbed the church spire on the outside!’

Another story concerns now demolished cottages on Barkestone Lane. ‘Some cottages had only a ladder to the upper floor. An elderly lady had died and there were difficulties in getting the deceased lady down. So the undertaker placed the lady over his shoulder and carried her down the ladder!’

‘The fair would come to Bottesford just before or after the Nottingham Goose Fair. There was usually a cakewalk and I remember the squeals of the girls when they were on it.’

‘Mr. George Edwards, the uncle of Mr. Nelson Parnham, had a white pony that he used to put to graze in a field on the other side of Palmer’s Hill. Children would head to the field as soon as the coast was clear and then the pony would have a ‘full load’ to carry!’

‘Mrs. Hannah Standley sold ice cream at the Rutland Café in the thirties. It was possible to buy custard ice cream from the Café and this was delicious!’