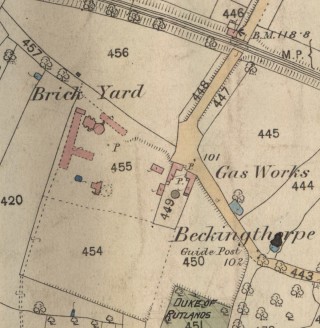 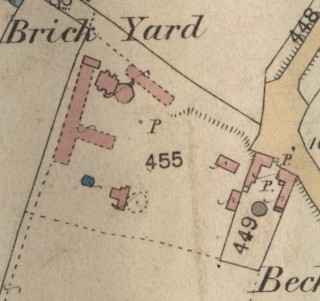 Buildings and structures in Challand's brickyard, 1884. 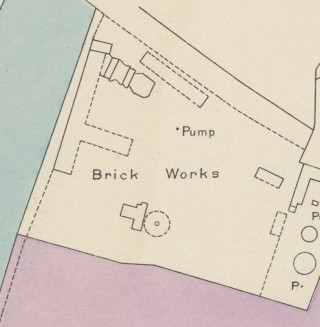 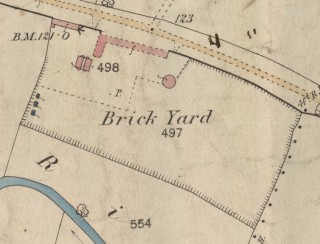 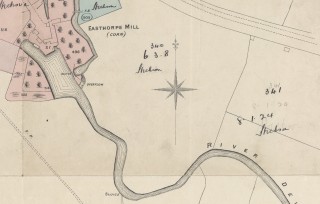 The area south of Grantham Road from Easthorpe Mill (left) to the site of Hoe's brickyard (right), 1920.

Records show that there were two brickyards operating in Bottesford and Easthorpe during the 19th Century, as confirmed by detail in the 1884 Ordnance Survey map of the village lent us by Mike Saunders. One of these occupied most of the area that is now the site of the modern factories of Perfectos Inks and other companies. This yard is also shown in the detailed map of Bottesford issued during the 1920 land sales by the Rutland Estate, lent us by Peter Topps. The brickyard was owned by the Challand’s family, who also made tiles and pipes, as well as being monumental masons. The distinctive “Bottesford Blue” pantiles can still be seen on several buildings in and around the village, and Challand’s name is seen on some of the beautiful slate headstones in Bottesford churchyard. The set of photographs of brick making in Bottesford from around 1900, lent us by Mrs Jean Round, probably show detail of this yard and the work carried out in it.

The 1884 map is slightly more detailed than the 1920 one. Hatching indicates the extent of the actual workings, occupying old fields numbered 455, 454 and 450 in the 1884 map. The excavations would probably have yielded clay and thin limey bands, a mixture suitable for brick making. Neither map indicates working in field 456, between the old lane and the railway, where the modern recycling site is situated, though it is possible that later workings extended into this area.

The maps show a number of buildings and other structures in Challand’s brickyard. The long buildinggs may have been drying sheds, shown with a dashed lines to indicate that they had open sides to allow air to circulate. The circular structure in the southern part of field 455 may have been a horse-powered pug mill used to mix the raw clay into a smooth paste ready for moulding. The most interesting feature is the curiously shaped buildings close to the lane at the northern edge of the area. These most probably include the kiln where the bricks were fired, but two separate though adjoining buildings are indicated, and what their precise purposes were is unclear. The same two structures are shown in the 1920 map.

Challand’s yard appears to have remained active into the inter-war years, and people still remember the old pits. Mrs Dorothy Beedham described skating on the frozen standing water in part of the brick pit during the 1920s or 1930s. After the Second World War the remains of a brick-lined channel, possibly a flue from the kiln, were still visible. Eventually, the excavated area was used for landfill and then used for an industrial estate.

The maps also show the Botteford gas works located next to the brickyard. The old gas works office is now a day nursery, but the furnace building has gone, as have the gasometers. Bottesford gas works operated from the mid-19th century to the inter-war years, until the arrival of mains electricity.

The maps are very similar in the detail of the buildings and roads, suggesting that the 1920 map is largely a copy of the earlier one. However there are some differences, most noticeably in the gas works, which by 1920 has acquired an extra gasometer, two new wells and a small addition to the sheds.

A second yard operated by Thomas Hoe was located in Easthorpe, on the southern side of Grantham Road, an area later used for landfill. The 1884 map shows the extent of the excavation and the buildings on the site. The long building alongside the road may have been a drying shed, close to the clamp or kiln built further into the yard. The building in the corner of the yard next to the road may have been an office and workshop, and the circular structure may have been a horse-powered pug mill. The site is on low lying alluvial deposits close to the river Devon, and may have provided a mixture of sand and clay well suited to brick making. The same area lies at the edge of another of the 1920 maps, but none of the brickmaking buildings are shown, indicating that the yard had ceased to operate by this time.

The ready availability of coal supplied by rail, following the opening of the Nottingham-Grantham line in 1850, must have been a major factor in the success of the brick and gas works. It is difficult to imagine the gas works existing without this supply of fuel, but the brickyards have a longer history. Bottesford and its surroundings have a number of brick farmhouses and other houses dating from the 18th Century, some probably going back to the 17th Century. Brick making has a long history in this part of the Vale of Belvoir. After 1792 it is possible that coal was supplied via the Grantham Canal, but earlier brick making would have been dependent on wood for fuel (unless coal could be transported by boat if the River Devon had been navigable: there is no report that it was, as far as I am aware).