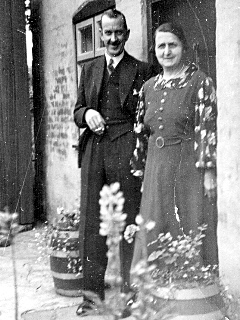 Arthur Edward Silverwood was born in Redmile in 1886 [1]. According to the 1911 census he lived at home in Redmile with his father Tom Walter Silverwood (49), a tailor maker and post master, and mother Jessie Louisa Marshall Silverwood (47). Arthur Edward worked as a Tailor maker like his father. He lived with his sisters and brothers:-Florence Anne (23) a postal assistant, Ethel Eliza (21), Robert Charles (18) a poultry keeper, Cecil Tom (12) at School and Thomas Phead Carlton, a nephew, also at school.

In 1914 he was representing the Soldiers & Sailors Families Association, serving on the Relief Committee, and was active as an official in the Primitive Methodist Church in Bottesford.

His service record is available in the Kew archives. [2]

He was attested on 10th December 1915 and posted to the army reserve, 4th Battalion, Leicestershire Regiment, as a private. It appears that he lived at home and still worked as a post office servant; given his trade was sub postmaster in Redmile. However A.E. Silverwood was appointed as the honorary recruiting agent to the 10th Leicester’s for Redmile, Barkestone and Plungar some 3 months previously. [3]

In January 1916 he organised the distribution of 71 Khaki armlets to attested men living in Redmile, Barkestone and Plungar. This included workmen on the duke of Rutland’s estate. He was described as Mr A. E. Silverwood C.R.A. [4] By June of 1916 he was at Scotton Camp, Catterick, where he was vaccinated and inoculated.  In his war service record it is noted that he was appointed as an acting L.Cpl. on 10th November, 1916, however he relinquished his acting rank on embarkation to France on 23rd December, 1916, arriving in Calais on Christmas day, 1916. January 1917 saw him reposted to different units in the Leicestershire’s and on 29th January 1917 he joined his unit in the field. While there are no details given in his service record, he was recorded as a casualty in the field on 14th February 1917, and on 23rd February 1917 he was posted to England as a candidate for a commission. He was accepted for admission to no. 10 Officer Cadet Battalion at Gailes, Ayrshire on the 7th April, 1917.

Arthur Edward served as an officer with the Notts. and Derby Regiment, the Sherwood Foresters, from 31st July 1917. He was reported in the London Gazette supplement and was promoted from an officer cadet to a 2nd. Lieutenant with the 2/5th Battalion. [5] His service record also states that he served with the 17th Sherwood Foresters until they were disbanded.

There is a medal record card in existence for him, but is unusually empty and it gives no details as to his service number, his medals etc.

In the battalion diaries for the 2/5 Bn. Notts and Derby Regiment there are details of the events of the 20th and 21St March 1918 east of Ecoust near Noreuil which led to Arthur Edward Silverwood being taken as a prisoner of war. [6]

In the records it describes how after 5am on the morning of 21st March 1918 there was 4 hours of heavy German bombardment (including gas shelling) followed by an attack in force by the enemy (in mass formation). The battalion was eventually surrounded and cut off. A.E. Silverwood was one of 22 officers listed as missing [7] and a further 599 of other ranks were lost on that day. The diary listed survivors- other ranks a mere 4.

The war diaries also contain letters from 3 officers who had also been taken prisoner on that day, giving their accounts of the events of 21st March 1918.

Lt. Col. H.R. Gadd wrote his letter on 19th December 1918 [8] following his return from Germany and described how the battalion had been enfiladed and how, in moving his troops back he ran into 200 “bosche” and was taken prisoner.

In January 1918 Major A.C. Clarke described how the front line was obliterated by 9 a.m. and that there were 3 waves of enemy attack, with men being continually hit. [9]

On 5th February 1919 Capt. H.P. Graves described how his dug out was blown in and it took the men 2 hours to dig themselves out. The focus was on defending the Sunken Road, however “the bosche enfiladed our Sunken Road position”. He also described how they were attacked from the rear and the front and were bombed up the flanks”. He described how he continued fighting with shrapnel wounds in the thigh until he was rendered unconscious by a machine gun bullet. [10]

It was in this heavy action that Lt. A.E. Silverwood was reported missing on 21st March 1918. There is a copy of his personal statement of events (written in April 1919) in his service record. He describes how he was with his platoon in the DEWSBURY trench and described how the enemy had broken through and had enfiladed the trench with machine guns. He had been ordered to remain with his platoon at C.T. until the remainder of the company had been moved to a new position. He was ordered by Major Trench to a place nearer the Sunken Road and then received instructions to withdraw to the Sunken Road. It was at the Sunken Road that he was wounded through the right arm at the shoulder joint which, in his words, ”put him out of action”. He was with Lt. Col. H.R. Gadd at this time and like him, was taken prisoner. Later in his service record there is confirmation that the War Office investigated his version of events and confirmed that “no blame was attached to him in the matter”!

The injuries sustained on 21st March 1918 were serious and his disability was attributed to his military service and acquired in action. On 16th March 1919 he was assessed as 100% disabled in hospital. He was sent to Beckett Park Hospital, Leeds, to the Officers part of the hospital, for surgery on his shoulder. This took place on 17th March 1919 and 2 sequestra (pieces of dead bone) were removed from his shoulder. Almost a year later, the Medical board report from the Military Hospital York on 9th April 1920 confirmed that while some of his wounds had healed, others had not and he still had no power or movement in the shoulder and his biceps and triceps were wasted. He had a loss of sensation with weak elbow movement. The report stated “no progress to note”.   By 25th April 1919 he was awarded a gratuity of £250 and a wound pension of £50 p.a.. From the medical reports he spent a lot of time in hospital.

On 9th June 1920 Lieut. A. E. Silverwood relinquished his commission on account of ill health caused by wounds. He was to retain the rank of lieut. Following regular medical board reviews he was eventually awarded a higher wound pension of £100 p.a. as his injuries were deemed to be equivalent to the loss of a limb, and this increased wound pension was backdated to the date of the injury. There were originally more documents on the service record however there is a note on the file that many wound pension documents were weeded in 1957.

A medal record card exists however no details are provided on it.

After WW1 he became politically active and served as the local agent for the Melton division of the Liberal association, attending the National conference in Margate in 1927. [13]

He married twice. He married Edna Ancliff May in 1925 [14]. According to her obituary, their short married life together had been shadowed by her ill health and she died in 1927. [15]

At the time he was the Liberal agent for the Melton division [16] however by September 1929 he resigned. It was reported in the paper that he said “for months he had been running on the edge of a nervous breakdown and that he needed a prolonged rest”. His services were highly valued and in appreciation he was presented with a leather suitcase “furnished with every necessary article of toilet”. [17]

He married again in 1935 to Constance Jessie Challands. [18]

By 1936 he was the Registrar of Births and Deaths for the Bottesford sub-district, on Albert Street Bottesford. [19]

During WW2 he acted as Head A.R.P warden [25], was chairman of the Bottesford Savings Movement [26], and served on the Local Food Committee. [27] At one meeting he made reference to the conditions in Germany when he was a prisoner of war. By 1943 he served on the Local Invasion Committee [28] and chaired the Victory Commemoration Hall Committee, described as a welcome home gift to the forces. [29] [30]