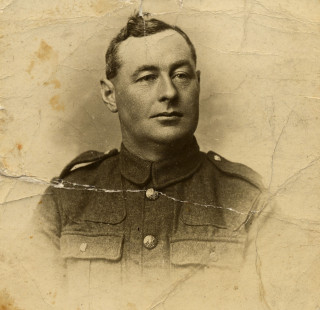 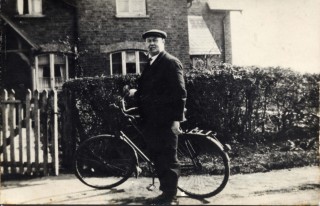 Bill Bryan outside the family home in Nomanton, around 1939.
Contributed by Mrs Betty Topps.

William (Bill) Bryan was born 1881 in Coddington, Nottinghamshire, son of agricultural worker Robert Bryan and his wife Annie. In the census of 1911 he is recorded living with his wife Mabel and their one month old son Cecil at the home of Mabel’s parents James and Elizabeth Exton, in Easthorpe, Bottesford. In 1915, in his Service Records, he gave his address as High Street, Bottesford, and the names of four children, Cecil James, Annie Elizabeth, John William and Robert Henry. The last went on to serve with the Scots Guards and Gurkha Rifles during the Second World War, reaching the rank of Major.

Worked as a Foreman Engine Driver through his war service. Was demobilised at Woolwich on the 17th September, 1919.
Served in
Army Service Corp (ASC) (2)