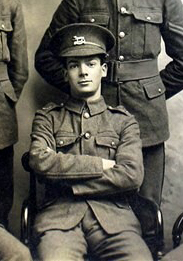 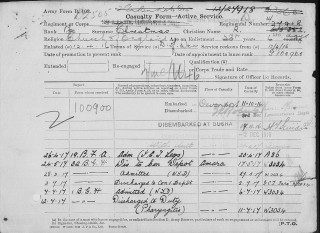 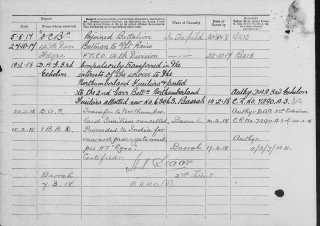 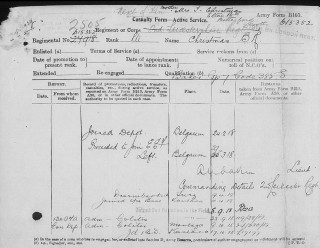 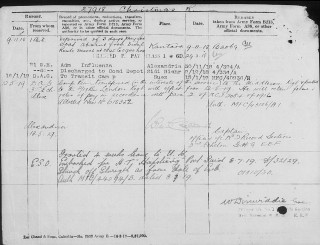 Reginald Christmas was recorded in the list of Absentee Voters for Bottesford, 1918/1919, as 27918 Pte, 2nd Leicesters, with the address ‘West End, Bottesford’. However, his service history was complex, and the records are in some respects confused.

Reginald Christmas was born in Bottesford in 1896, son of Thomas Christmas, born in 1851 at March, Cambridgeshire, and Martha (nee Chapman), born in 1857 at Wrangle, south of Wainfleet and Skegness.

In 1901, the Christmas family lived in one of the New Station Cottages (no.2 in the census) at the West End Bottesford. Thomas Christmas was employed as a railway signalman. The children at home were Edith (18, a dressmaker), Clara (17), Arthur (15, a gardeners boy), William (8), Florence (6) and Reginald (5). The three youngest were at school.

In 1911, the family was still in the New Station Cottages (no.3 on the census). Clara and Arthur had left home, Edith was a dressmaker, William a farm worker, Florence in domestic work, but Reginald, aged 15, was still at school.

Reginald Christmas enlisted in Melton Mowbray on 29th February 1915, aged 18 years and became a private in the 12th (R) Battalion, Leicestershire Regiment: his Service Number was 27918. He also served in the Duke of Cambridge’s Own Middlesex Regiment, G/100900. However, his main service was with the 2/19th Battalion, London Regiment, based at Basra, in the Mesopotamia campaign.

He gave his home address as Elton Road, Bottesford. He re-enlisted on 12/4/1916, giving his trade as a baker.

He was awarded the Victory Medal and the British Medal for his war service, but not the 1914 or 1915 Star, presumably because his active service was counted from his re-enlistment in 1916.

The service records for Reginald Christmas that were located online are confusing. Information is duplicated and contradicted, so that it is difficult to be certain as to their interpretation without further records, which have not been found and probably no longer survive.

There are eight individual digital images of service records, which I shall call Forms 1 to 8, in the order they appear in the search results.

Form 2: The reverse side of Form 1 and shows further detail of his outline service history.

Form 6: The reverse of Form 5, continues his service records with no further revision of his service number or unit.

It is probable that Reginald Christmas started his army career as a private in the Leicestershire Regiment, No. 27918. Born in 1896, he was only 18 in 1914, and must have been a pre-war Territorial to be in the 1914 mobilization photograph (on this site). He enlisted as 27918, 12th Leicesters, on 29/2/1915. He re-enlisted on 12/4/16 as 615352, 3rd Middlesex, but was re-assigned Service No. G100900. However, it appears he had transferred to the 3rd Battalion, Leicestershire Regiment until he was posted overseas to arrive at Basra. This was a training battalion, which apparently never left the UK. When in Mesopotamia he was in the 2/19th Battalion of the London Regiment, apart from a brief transfer to the Northumberland Fusiliers in February 1918, which was rapidly cancelled. He was with the London Regiment until he was transferred on 12/5/19, back to the Middlesex Regiment, reverting to his original service number 615352 until his discharge on demobilization, 31/3/1920.

The record of where he served and when is assembled from the dated entries on his service record papers, as set out:

Reginald Christmas married Isabella Lumsden (1895-1992) from Bathgate, West Lothian (Linlinthgowshire) in 1923. He died in September 1973, and his death was registered in Nottingham.

In the following summary, he is recorded as being part of the 3rd Battalion, Leicestershires.

The service records for Private Reginald Christmas are rather confusing, and his assignment to the 3rd Leicesters is made provisionally until more records can be located.
Served in
Leicestershire Regiment (48)