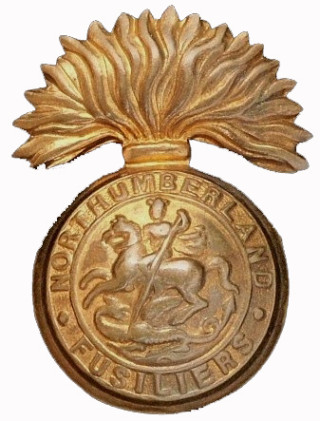 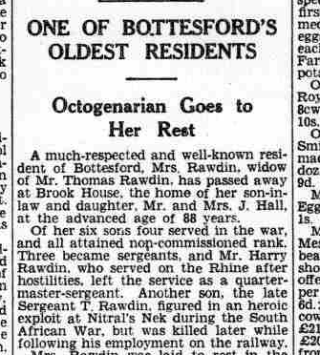 Extract from the report of Sarah Rawdin's funeral, from the Grantham Journal, 29th May,1937
British Newspaper Library

Harry Rawdin was one of four sons of Thomas and Sarah Rawdin who all served in the army. The oldest, Sergeant Thomas Rawdin, fought in the Boer War and gained fame as the ‘Hero of Nitrals Nek’, earning the D.C.M. The others, Frank, Harry and Cecil all fought in WW1 and reached the rank of Sergeant. Harry Rawdin served with the Northumberland Fusiliers. After the end of the war he continued to serve in the army for several years as a Quartermaster-Sergeant with the Royal Fusiliers, Kings Own Yorkshire Light Infantry and the Manchesters.

The Grantham Journal of the 29th May, 1937, reporting the funeral of Sarah Rawdin, aged 88, commented that: “Of her six sons four served in the war, and all attained non-commissioned rank. Three became sergeants, and Mr Harry Rawdin, who served on the Rhine after hostilities, left the service as a quartermaster-sergeant.”

Apart from the information on the Bottesford Absentee Voters list, no online service records have been located so far for a Harry Rawdin, born in 1885.

The next clue is his service number 5/16405. The ‘5/’ denotes one of 12 districts training young soldiers – lo and behold, all of the other training battalions of the Northumberland Fusiliers are in District 5. They are the 29th, 30th, 31st and 32nd Reserve Battalions of the NF – by 1918, they had been renumbered respectively the 84th, 85th, 86th and 80. The 53rd was specifically for young men.“

Thanks to Jonathan’s help, we can identify Harry Rawdin as Sergeant 5/16405, 53rd Battalion, Northumberland Fusiliers, with regard to his wartime service. He was thus engaged primarily in training new troops within the UK, until after the end hostility the battalion became part of the Rhine army. Post-war records confirm that he continued to serve in the army, transferring by 1921 to the Royal Fusiliers (see below).

After the end of WW1, Harry Rawdin re-enlisted, and he appears in successive annual Absent Voters lists from 1921 to 1927. All the records are for Bottesford polling station, giving The Green has his home address. They indicate that he served in three regiments during this time, achieving the rank of Quarter-Master Sergeant and then Lance-Lieutenant.

A soldier called Harry Rawdin married at Wiesbaden, Germany, in 1927: the record does not include his spouse’s name, nor does it confirm that this is the man from Bottesford though this it quite possible that it is.

He is mentioned in the Grantham Journal in 1937 and 1938, notably in his father, Thomas Rawdin’s obituary, reported on the 29th May, 1937, and had evidently returned to civilian life in the Bottesford area.

Information from the General Register indicates that a man named Harry Rawdin died in Wandsworth in September, 1947. If this is the Harry Rawdin who came from Bottesford, then he would have been aged 62. However, it is a surprise to find that he should have died in London, and so we would like to find further information to confirm that this was the case.

We lack information regarding his Medal Honours, and would prefer confirmation of the date and place of his death.
Served in
Northumberland Fusiliers (2)