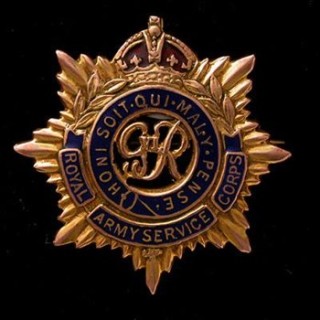 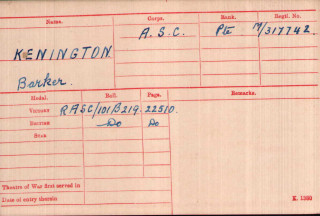 Henry Barker Kennington was listed as an Absent Voter in Bottesford in 1919. According to this record, he lived on Market Street, and was a private in the 267th Siege Battery. His Service Number was M/317742.

Henry Thomas Barker Kennington (this appears to have been his full name) was born in 1878 at Bardney, Lincolnshire. He was the son of Thomas Kennington, who was born at Bardney around 1842-1844, and Emma Kennington, born at Burton on Stather, Lincolnshire, in 1853. In 1881, she was described as an engineer’s wife living in Handsworth (Staffordshire), with six children and a governess.

In 1891, when Henry was thirteen, the family were living in Sheffield, at 279, Granville Road. Thomas was employed as a corn miller’s traveller. There were five children, the oldest being William who was 20 and employed as a shorthand clerk. Henry was the fourth child, 13 years old, a scholar.

By 1901 Thomas and Emma had returned to Lincolnshire, and were living at 35, Harrowby Road, New Somerby, Grantham, with their youngest son, Robert, but Henry was no longer with them. In the 1901 Census, he was described as ‘visiting’ the Peatmans, a family who had a bakery and groceries shop called North Scarle “near the Bede Houses” at Ruskington, Lincolnshire. Henry may in fact have been a boarder with the Peatmans, as at the time he was a fruit and potato salesman. (Additionally, the name North Scarle is confusing, in that this is the name of a village on the River Trent in Lincolnshire, a long way from Ruskington, which is near Sleaford. It is probable that the house the Peatmans lived was called ‘North Scarle’, rather than being at a place of this name.)

In 1911, Henry was still a boarder, but was now living in London, at 9, Trigon Road, Kennington, working as a Motor Cab Driver (i.e. a taxi driver). He was married, but his wife was not with him in London. He had married Fanny Armstrong on the 14th December, 1903, in Manningham, Bradford Yorkshire. At this time, he was a fruit salesman living in Nearcliffe Road, and she was living at Clyde Road, Sheffield, but there is no information about her occupation.

The information in the Absentee Voters list 1918/19 indicates that Henry Barker Kennington was Private M/317742, with the 267th Siege Battery, and that his home address was on Market Street, Bottesford. His Medal Index Card records that he was in the Royal Army Service Corps (rather than the Royal Garrison Artillery) and that he was awarded the British War Medal and the Victory Medal. The ‘M’ prefix of his Service Number confirms that he was a member of the RASC.

The website of the Wartime Memories Project describes the Siege Batteries of the Royal Garrison Artillery as being deployed behind the front line, tasked with destroying enemy artillery, supply routes, railways and stores. The batteries were equipped with heavy Howitzer guns firing large calibre 6, 8 or 9.2 inch shells in a high trajectory. RASC would have been there is a support role, typically as drivers.

This website lists a great number of Siege Batteries, but not the 267th. It appears however that, in rough terms, the higher a Battery’s number the later it was deployed. Thus the 220th Siege Battery proceeded to France on the 25th of December 1916, and the 236th on the 29th of January 1917. The 295th Siege Battery, described as armed with 6 inch 26 cwt Vickers Howitzers, were in action at Messines from 7th of April 1917 until moving further north in the Ypres Salient in July, where they were in action until November 1917 in the 3rd Battle of Ypres. It adds that the war service of the 295th Battery totalled 20789 Rounds!

It seems reasonable to suggest that the 267th were probably deployed in France at some date around the middle of 1917, and may well have been in action there until the end of the hostilities.

Service record information is poor for this soldier, for instance the movements of the 267th Siege Battery and the role of the ASC with regard to this unit. In addition, we do not have information regarding Private Kennington's Attestation and joining up, nor of his discharge.
Served in
Army Service Corps (9)