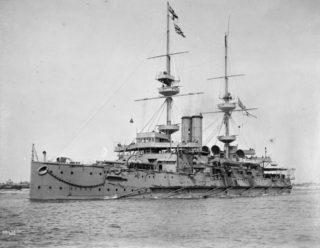 HMS Caesar, battleship on which Arthur Ireland served in 1919.
Wikipedia 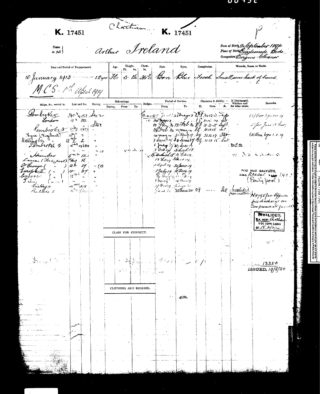 Arthur Ireland was born on the 2nd September 1894 at Biggleswade, Bedfordshire, one of the children of Artur Ireland, a railway porter born in 1872 at Biggleswade, and Fanny Ireland, who also came from Biggleswade. In 1901, the family had moved to Bottesford High St, where there were four children, Arthur, Horace (b.1897 at Biggleswade), Ivey (b.1899 at Biggleswade) and Mabel (b.1900 in Bottesford). However, by the 1911 Census day they had moved to Nottingham, living at 29 Forester Street, Netherfield. Their father was now employed as a railway brakesman, Arthur now 16 worked as a railway engine cleaner, and Horace (14) as an ‘errand boy, furniture manufactory’.

The Ireland family were Methodists. Both Arthur and his brother Horace are named on the Bottesford Methodist Chapel Roll of Honour.

Arthur joined the Royal Navy at Chatham on the 10th January 1913. His service sheet shows that he stayed in the navy until the 30th June 1920 when he was given free discharge on compassionate grounds.

The record sheet indicates successive periods of time when he served on a series of ships and shore establishments. The identities of these locations have been traced mostly via Wikipedia and chat rooms.

Before the outbreak of the war, he served on: HMS Pembroke – this appears to have been a Medina-class gunboat formerly known as HMS Trent, built in 1877, scrapped in 1923; HMS London – a Formidable-class battleship launched in 1902, scrapped in 1922.

Between 20th May 1914 and 31st May 1917, he served on the depot ship HMS Tyne based on the Nore, and HMS Vigilant, a destroyer belonging to the Channel Fleet. The later part of the war he was at HMS Pembroke II, the RN Air Station at Eastchurch, Sheppey, and on board HMS Humber, which was a monitor which saw action in Turkish waters off Mudros and Ismid.

In 1919 he had shorter spells on the battleship HMS Caesar, the cruiser HMS St. George and the cruiser HMS Europa, before returning on-shore at HMS Victory II training depot located at Crystal Palace and finally back at Victory II on the Isle of Sheppey.

After the war had ended