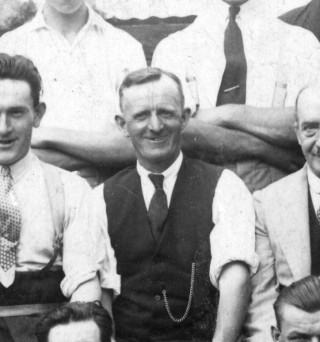 Fred Wilcockson, seen as a member of the Bottesford British Legion bowls team c.1930
From the collection of Mrs A Hewitt

Fred Wilcockson was born about 1886. He is not recorded in the Bottesford area in the 1911 Census. However, when he enlisted, he was living with his family on the High Street, Bottesford, and Fred was working as a railway platelayer. He had married Annie Martin on the 21st September, 1911, in Grantham, and they had a daughter, Constance Daisy, born on the 30th August, 1912. He was born in Hull, Yorkshire.

An entry on Fred Wilcockson’s service papers states that on the 17th September, 1914, he enlisted, was tested and passed as a driver, but was sent on furlough, “in accordance with Recruiting Memo No.72”. He was 28 years old when he signed his attestation papers on the 22nd February, 1915, at Newark. He was 28 years old. His call up was reported by the Grantham Journal on March 13th , 1915.

Initially, Fred was in the Army Service Corps as a driver, Service Number T4/061463. He was transferred to be a Sapper in the Royal Engineers, and his Service Number changed to 261722. This was the number allotted to him when he attested.

However, his service was not without incident. He seems to have had problems with punctuality and not paying attention to the minute details of having a clean rifle. On one occasion he was charged with parading with dirty mules for convoy duty (and received 5 days CC – 30th November, 1916)!

Fred Wilcockson was awarded the British War Medal and Victory Medal in 1922.

After the war, Fred Wilcockson lived at 2, Pinfold Lane with his wife Annie. Mr Ian Norris remembers that he wore a British Legion badge on his watch chain. He continued working as a railwayman. The Wilcocksons moved to the High Street and lived in one of three cottages by the Post Office. Then, when the first council houses became available on Pinfold Lane (West End, Bottesford), probably in 1938, the inhabitants of these High Street cottages were persuaded to moved there.

A man named Fred Wilcockson who died in 1958 in Grantham was probably him. If correct, then he would have been 72.