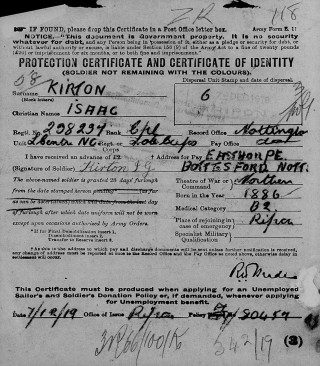 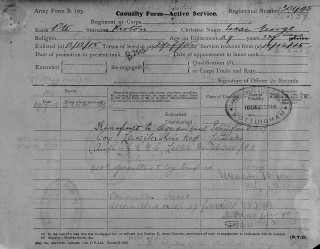 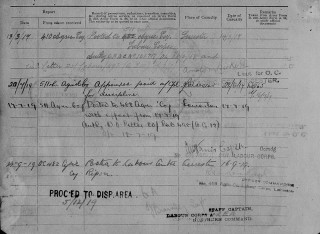 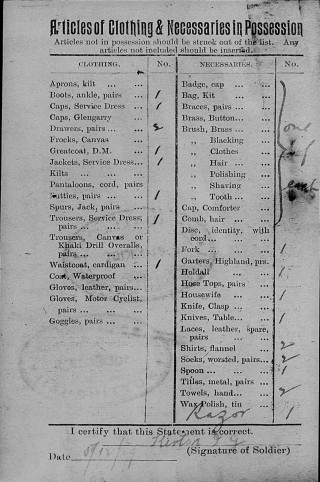 Isaac George Kirton was born in Easthorpe, Bottesford in 1886, son of John and Ann Kirton. John was born at Easthorpe in 1855 and Ann (nee Johnson) at Gelston, Lincolnshire, in 1862.

By the time of the 1901 Census, Isaac was himself working, as a general servant on the farm of George Doubleday at Sutton Lodge, Granby.

Isaac married Elizabeth Cooper at Borthwick Church on 18 April, 1910, registered at Grantham. In the Census of 1911, the couple had a little girl under a month old. Isaac, who now used his second Christian name George on the census form, was working as a farm labourer at Carrington Farm, Calverton.

Isaac George Kirton attested on the 12th December, 1915, at Leicester, as 238237, Leicestershire Regiment. He gave his age as 29 and his trade as a carter. His Medical was on 6 June, 1916, and he was mobilized on the same day, joining his unit at Ripon to serve in the Northern Theatre of war (France and Flanders). He was transferred to the Labour Corps, Agricultural Coy at Patrington, East Yorkshire, and was part of the 410th Agricultural Coy on 23 June 1917.

After the end of hostilities, he was with 511 Agric Coy. He volunteered to continue serving with the Army of Occupation for three months from August to November, 1919, and transferred to 482 Agric. Coy. After this extended spell with the Labour Corps, he was finally instructed to ‘Proceed from Line to Dispersal’ on the 10th December, 1919. He was demobilized on the 4th January, 1920, at Nottingham.

He had enlisted as a Private, and was promoted to a/Corporal and Corporal in 1919, towards the end of his military service.

Among the service papers that have survived is a standard form listing his ‘Articles of Clothing and Necessities’ down the number of pairs of socks and his ownership of a ‘housewife’, which apparently was the name used for a sewing repair kit. The must have been standard issue forms, one for each soldier, but they appear to be rare among the records that have been kept. This is the first example the present writer has seen.

Jonathan d’Hoogue is thanked for identifying the regimental cap badges and confirming the identities of the men in the photographs.

Not confirmed
Served in
Labour Corps (9)